You may also like
Dismiss
8 Reasons Why Viking Star is the Cruise For You
What Makes The World's Most Luxurious Cruise Ship So Luxurious?
Viking River Cruise vs. Viking Ocean Cruise
Viking vs. Oceania Cruises
5 Reasons Why Viking Ocean Cruises Is Great for First-Timers
Seabourn Encore vs. Regent's Seven Seas Explorer
Why Vodohod Is the River Cruise Line for You
9 Reasons to Get Excited About Marella Cruises' Marella Explorer 2
Are Spas and Indoor Pools Still Open On Cruise Ships? 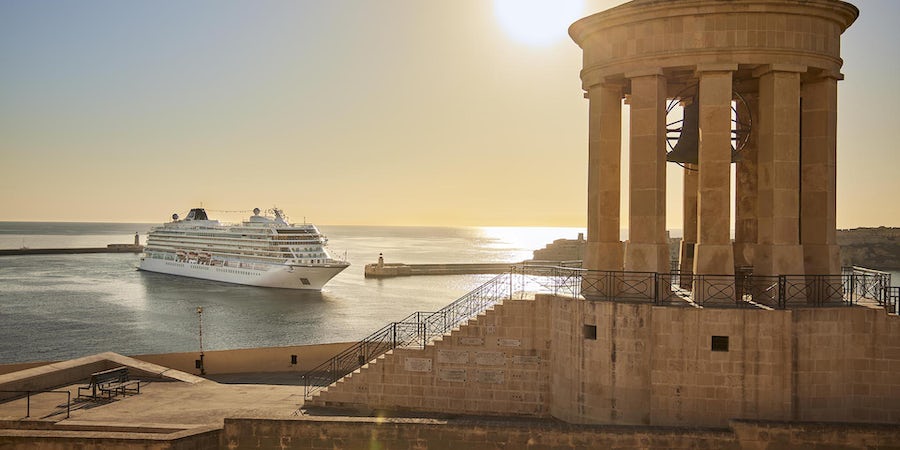 The 930-passenger Viking Mars is the seventh ship in Viking's near identical ocean fleet which began with Viking Star exactly seven years ago. This year also marks the 25th anniversary of Viking, which is the world's largest river cruise line.

Viking Mars was named in a low-key ceremony held in Valletta, Malta, on Norwegian Constitution Day, May 17, with a bottle of Norwegian aquavit smashed on the ship's hull . The line's Chairman, Torstein Hagen, said that out of respect to the war in Ukraine it would have been "ostentatious" to hold a traditional large-scale event and the company had decided to mark the naming -- and silver anniversary of the company -- in a more meaningful way by donating £250,000 GBP equally between 25 charities.

We're aboard Viking Mars on its inaugural sailing from Malta to Italy at the start of a maiden season in Mediterranean, Scandinavia and Northern Europe. The ship then repositions at the end of the year for voyages around Australia and New Zealand.  Here are some of our first impressions.

Viking Mars Has A Comfortable Feeling Of Deja Vu

Most cruise lines try to outdo their previous vessels with ships that are bigger and boast more restaurants, swankier suites and new wow factor facilities -- such as floating theme parks and Broadway productions -- to pull in passengers. However, Viking has steadfastly stuck with the ethos of doing what works and not changing for the sake of change.

As all of the ships -- Viking Star, Viking Sea, Viking Sky,Viking Orion,Viking Jupiter, Viking Venus and now Viking Mars -- are like peas in the proverbial pod. Repeat passengers have the comfort of returning to a familiar floating home from home and not spending the first few days aboard trying to find their way around and figuring out how to get back to their stateroom.

For newcomers that might have been on the line's river ships, there are also some crossover features, such as the oceangoing take on the al fresco Aquavit Terrace and understated and beautiful Scandinavian design details which can be found throughout the public areas and in the cabin decor.

That Said… There Are Some Visual Changes

The one thing that does differ from ship to ship is the art collection of paintings, prints, photography, sculptures and folk art, which is a focal point in every public area, nook and cranny on Viking Mars, as well as in the staterooms.

Worthy of an art gallery on land, the collection includes originals by Norway's most internationally famous artist Edvard Munch. A handy book in the cabin details the key pieces so you can pinpoint how to find them. We really like the picture in our stateroom which is a photograph of a striking Chinese bridge and alongside is a painting of the same scene done by a pupil at a Viking sponsored primary school in Jingzhou.

One constant can be found in the stairwells which showcase scenes from the Bayeux Tapestry. Apparently, you can find the section showing one of the most well-known sections (for Brits) where the Anglo-Saxon king Harold was killed by an arrow in his eye. However, we have yet to find it and it's a fun challenge to carry on looking -- and get some exercise at the same time.

When Viking Mars' predecessor Viking Venus was launched in 2021, it was the first-ever ship to have an onboard PCR testing laboratory with the capacity to test all passengers and crew members every day. This facility has been carried over to Viking Mars and retro-fitted on all the other ocean vessels in the fleet.

We've sailed on many ships during and after the pandemic and Viking's health protocols are the most comprehensive and impressive that we've seen.

Mask wearing -- when moving around the ship and prior to the result of the first onboard test -- is mandatory for the first 24 hours after boarding. After that it is optional for passengers to wear masks (although many do) and it is obligatory for crew members. Extra masks, a bottle of hand sanitizer and disinfectant wipes are left in the cabin,

Elsewhere, enhanced cleaning procedures are in evidence, such as the use of UV light disinfecting robots in public areas. Hand washing at the entrance to the dining rooms is strictly (albeit very politely) policed.

Not all inaugural sailings go completely to plan and sometimes there are some technical snags or issues with staff as they get used to their duties and settle in. That's certainly not the case here and everything is seamless, attentive and intuitive. The ever-smiling crew members are clearly very well trained and equally friendly. Nothing is too much trouble.

They are also very knowledgeable. A notable example was on a shore excursion at a small and lesser-visited destination when a passenger asked about getting into town following a boat trip. The crew member was able to give a full break-down of how long it would take to walk to the nearby waterfront and the distance to the capital by taxi and the cost of the fare.

We are also noticing plenty of thoughtful details. After booking a trip that involved a swim stop, the cabin steward left a beach towel on the bed on the night before the tour. Shore excursion tickets also include useful reminders of what to take, such as the audio listening device for guided tours.

Viking operates its own onboard spa rather than contracting out the service to one of the big-name spa operators. The end result is a very simple spa menu that isn't overwhelming with a huge list of treatments involving all manner of lotions and potions. There are five massages and five facials (including one for men) along with a couple of manicures, pedicures and a hair salon.

In keeping with Viking's heritage, the treatments on Viking Mars are Nordic-themed and use natural products. The tradition of alternating hot saunas with cold dips or rolling in the snow is replicated onboard with a sauna, cold plunge pool and novel snow grotto. It's doubly refreshing that there is no charge to use these facilities.

Similarly, spa treatments aren't marred with the dreaded and hard sell of products at the end. The therapist will run through what they have used, if you want to know, but not push you to buy. Bliss in every sense (although we are very tempted to buy one of the cute sauna elves).

So, What's Missing On Viking Mars?

Well, compared with many other cruise ships it could be said that there is quite a lot missing from Viking Mars. Conversely, that is the very reason like-minded cruisers are drawn to the line in the first place.

The ship doesn't have for-fee specialty restaurants (that Italian Manfredi's and Chef's Table are included in the fare) a casino, waterpark, art auction, onboard photographers, late-night discos or a constant bing-bong of announcements.

As an adult-only line there are also no children.

Viking stands out from the crowd by not the very fact it does not follow the crowd. Viking Mars continues the theme of offering cultural sailings in stylish surroundings. The line has four more ocean ships on order -- including Viking Neptune yet to come in 2022 -- and passengers can expect more of exactly the same.