You may also like
Dismiss
Q&A: Can Americans Travel to Cuba on a Cruise?
5 Cruise Lines You Don't Know About ... But Should
Is Topless Sunbathing on a Cruise Allowed?
Havana Cabanas on Carnival Vista and Horizon
Which Cruise Should You Take to Cuba?
Top 8 Long Haul Short Break Cruises
Hurricane Irma: A Look Back At the Storm
Cunard Line History
Cruise Passenger Demographics: Who Will Be on My Cruise? 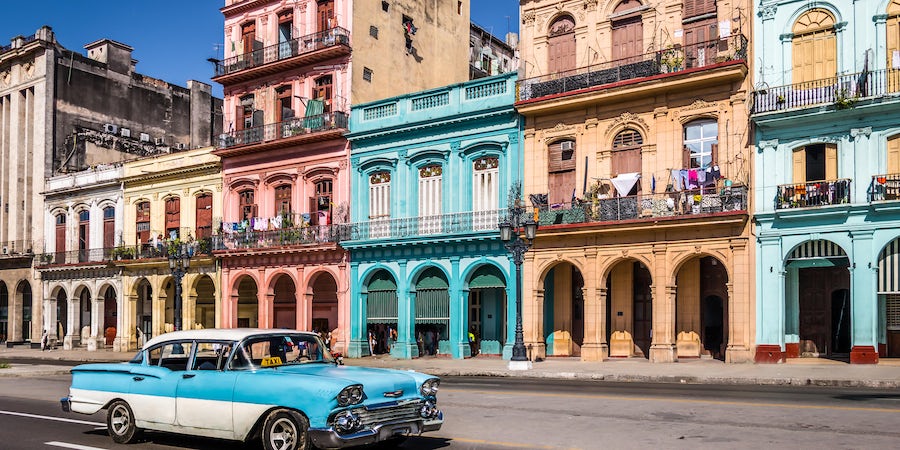 Will Cruise Ships Be Sailing to Cuba Again Soon?

On May 16, 2022, the Biden administration announced it will begin easing sanctions against Cuba, opening the road for Americans to travel to the Caribbean's largest island again and begging the question -- will cruise ships soon follow?

The move would come as a welcome one for the industry, which embraced cruises to Cuba after President Obama had made a similar move to ease relations between the U.S. and the country in 2014.

It took several years for logistics to get ironed out, and the first U.S.-owned cruise ship didn't sail between Miami and Havana until May 2016. But after that, most major cruise lines, including Carnival, Royal Caribbean and Norwegian, built itineraries going to Havana, Santiago de Cuba and other Cuban ports like Holguin from numerous U.S. homeports, such as Miami, Tampa and New Orleans. Luxury and small ship cruise lines also made Cuba a star on both Western and Eastern Caribbean itineraries.

When the Trump Administration closed travel into Cuba in 2019, the abrupt move wiped out a cruise destination that had sparked interest and excitement from Americans who had not been able to travel to the island since the 1960s.

Virgin Voyages, which debuted in early 2020, had planned to use Cuba as a marquee destination for its first ship, Scarlet Lady. The Trump turnabout forced the line to pivot and focus on other islands, such as the Dominican Republic and Bimini in the Bahamas.

In an interview this weekend with Cruise Critic, Virgin Founder Richard Branson talked about how he'd love to make Cuba the centerpiece of a Virgin Voyage itinerary again.

In late 2020, Virgin Voyages' president and CEO Tom McAlpin had commented that the line was still very interested in Cuba.

"Cuba was a very important part of our itineraries," said McAlpin in December 2020.

"We hope that, with the new administration, that will open up again. It was very good for our industry, and we look forward to being back in Cuba."

Reached for comment Tuesday, McAlpin reiterated that desire to bring the Virgin Voyages product to Cuba.

"Since launching Virgin Voyages, Havana has been on our radar. We’d love to be able to take our Sailors to experience the beautiful Cuban culture and streets of Havana. We look forward to including this port of call on one of our future itineraries."

One complicating factor to restarting voyages to Cuba comes courtesy of the COVID-19 pandemic. There are significant size and length restrictions for vessels looking to tie up right in the heart of Havana, and cruise lines had, historically, deployed smaller, older vessels that were better suited to this purpose.

However, the COVID-19 pandemic resulted in many cruise lines, including Carnival and Royal Caribbean, jettisoning their older ships to free up much-needed cash. Royal Caribbean sold off Empress of the Seas and Majesty of the Seas, both of which could call on Havana, and Carnival eliminated all but a handful of its classic Fantasy-class ships.

Could cruise lines re-acquire smaller tonnage that hasn't been scrapped? It's not unheard of -- Royal Caribbean initially transferred Empress of the Seas -- a ship that had been out of the Royal Caribbean fleet for a decade -- back into the fold from subsidiary Pullmantur in order to enter the Cuba cruise market.

One line that is uniquely posed to re-enter the market is Norwegian. Its Norwegian Sky, Norwegian Sun and Norwegian Spirit are all able to berth in Havana.

Cruise Lovers Would Cheer Opportunity to Sail to Cuba

The Cruise Critic message boards have already begun seeing some threads about the news, with members reminiscing about their previous cruises to Cuba and excitement about their possible return.

"I cruised to Cuba on Carnival in 2019 just a few weeks before travel was shut down and had a great trip, can't wait to go again," groundloop said in the Carnival Cruise Line forum. "Hopefully Carnival will be quick in setting up some Cuba cruises."

"I'm definitely doing this if this is true! Been waiting for this! Ugh, will probably have to fly to a port but Cuba has been on my short list," said cruisingguy007.

"We also did (a) CCL cruise to Havana right before it was shut down again," said pe4all. " I really enjoyed the "people to people" experience and learning about the way of life there. I would definitely do it again."

Reaction from Cruise Industry on Cruises to Cuba

Reaction to the news began to trickle in slowly by Tuesday morning, as cruise lines begin the process of seeing whether cruises to Cuba could, once again, emerge as a viable -- and unique -- itinerary in the broader Caribbean region.

"Our cruising experience in Cuba was amazing for our guests and crew members alike," a Carnival Corporation spokesperson told Cruise Critic. "Cuba is a bucket list destination that builds additional excitement and enthusiasm around cruising in the Caribbean."

Too Soon to Tell When Cruises Could Happen

Monday's announcement, however, did not specifically mention leisure travel as an area where sanctions would be lifted. And Reuters is reporting that the Biden administration has no plans to reinstate the individual "people to people" category that allowed cruises to travel to Cuba from the U.S. in the first place.

"People to people" travel was the main avenue that cruise lines took to bring their ships to Cuba. The provision allowed individual educational and cultural travel to the island, which the cruise lines used to offer specific workarounds while in Cuban ports. Shore excursions were controlled, at least in the beginning, and passengers were technically supposed to keep track of their time spent doing cultural activities.

That being said, almost everything that most Americans wanted to do in Cuba counted as a cultural activity, save going to the beach. And the beach is what Trump officials targeted when they got rid of the individual "people to people" category all together in 2019, as they said the category was being abused.