You may also like
Dismiss
Cruising With a Conscience in the South Pacific
5 Cruise Lines You Don't Know About ... But Should
Top 10 Pacific Explorer Tips
23 Things Cruisers Love to Complain About
Weaving 'Herstory': Q&A With the History-Making International Women's Day Cruise's Female Officers on Celebrity Edge
Why Germ-Zapping Robots and AI Technology Could Be the Future For Cruise Ships
Your Favorite Cruise Ship is For Sale? Here's Why You Shouldn't Panic
Squid Ink: A Cruise Ship Tattoo Shop So Nice, I Got Inked Twice: Live From Valiant Lady
Will Cruise Ships Be Sailing to Cuba Again Soon? 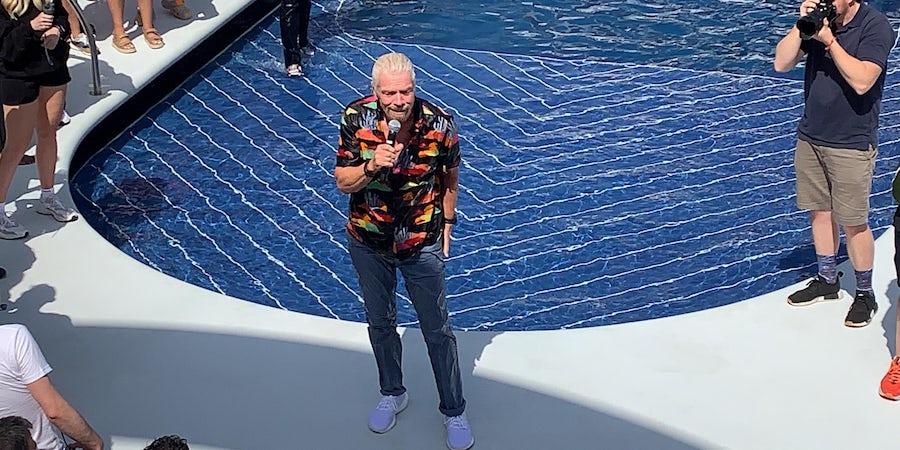 Virgin Voyages Valiant Lady set sail from Barcelona on its MerMaiden cruise on Sunday on a 7-night Western Med cruise -- with founder Sir Richard Branson onboard among the guests.

Branson welcomed around 1,000 passengers onboard the line's second ship with a greeting over the PA, as well as a letter left in cabins urging "sailors" (as Virgin calls passengers) to: "please share your experience on Cruise Critic"

We sat down with Branson, as well as Tom McAlpin, president and CEO of Virgin Voyages, on the MerMaiden, to talk about fleet expansion, disrupting the industry, hydrogen islands -- and the line's close partnership with J-Lo.

Sir Richard Explains Why He Launched a Virgin Cruise Line

"I never went on a cruise ship but from the feedback of those who did, it seemed to be wanting," Branson explained.

"I think what's missing in the market is a really good adults-only cruise line.

"The nice thing is the feedback from people who've been on the ship is fantastic, the repeat bookings are fantastic and there are even one or two people who are living on our ship right now."

"So I think by not having kids we've got much more space for beautiful workout rooms, a stunning massage area, pampering areas and party areas, running tracks -- all the space you'd have to put aside for kids slides etc., you can put aside for adults."

When asked if he felt he had disrupted the cruise industry enough, Branson replied:

"In the years to come, we'll see what happens."

Valiant Lady is the second of four planned ships. Resilient Lady will launch in the Greek Isles in August 2022, while the fourth ship's name was recently released as Brilliant Lady. Itineraries for that ship have yet to be revealed.

However, McAlpin appeared to contradict Branson when he added that the line could in fact grow to 10 ships.

"We also think this brand can grow. It's not going to be for everyone, but we certainly believe we can grow beyond four ships," he said.

He added that in some cases up to 30% of passengers were booking another cruise while onboard.

"It's a great sentiment, they want to come back again and again."

Havana and Cuba Are Still on the Virgin Wish List

Branson added that Virgin was still hoping to go to Havana on Caribbean itineraries. Scarlet Lady, the line's first ship, was originally supposed to feature trips to Cuba.

"We've got the place in the dock ready and waiting for us and we're still lobbying to get permission to do Havana."

Speaking just days before the U.S. announced the easing of travel restrictions to Cuba, Branson said he was hoping that Biden might do what Obama did and ease restrictions on travel to Cuba.

Size Matters When It Comes to Virgin Voyages Ships

Virgin's ships carry around 2,700 passengers at double occupancy -- which in industry terms is classified as "mid-sized", and is around the same capacity as Celebrity's Solstice class of vessels.

Their size means they can get closer into ports -- for example, Valiant Lady was parked at the end of Las Ramblas, where the ferry terminal is -- not at the main cruise port.

"We didn't build behemoth ships, we built mid-sized ships and that allows us to create a more intimate experience," McAlpin explained.

"It allows us to do things others can't do and this is a perfect example -- we are downtown in Barcelona -- we can walk right off here to Las Ramblas and walk into town."

He said the smaller size was designed specifically to appeal the type of passenger the line is trying to attract.

McAlpin said there were no plans to change the size of ship (certainly in the named four), but confirmed there would be "tweaks" depending where the ships are based, mainly artwork and dining.

"We can change menus over the course of time, but we don't really need to re-theme the ship. This place works fantastic."

Branson said the thinking behind the ships was to create "the superyacht of superyachts -- but for everybody".

"We wanted to create a superyacht for people at a very affordable price and I think that's what the team has done."

McAlpin ruled out entering new cruise markets such as luxury, expedition or river -- for the moment.

"We're focusing on Virgin Voyages for now. We've got a lot of work to do to build awareness and right now we're focused on this.

"As other opportunities come about, as Virgin has always done, we're always open to them."

Expect More Announcements About the Partnership With J-Lo

Virgin and Jennifer Lopez announced a partnership in March, with with J-Lo acting in a quasi-godmother role as "Investor and Chief Entertainment & Lifestyle Officer".

Although not an official "godmother" to any ship, the line sees her less as a figurehead and more as someone the line will work with to help shape it.

McAlpin said to expect more announcements to come over the next few weeks:

"We're super-excited about this relationship. It's a relationship that is evolving. I call her the godmother of our fleet. She is the brand ambassador for our fleet."

He also let slip that she would be on the ship "soon", but when pressed, would not state when.

McAlpin said the line felt that the partnership worked because of the person she is fitting in with Virgin's brand ideals: "The brands just fit very well together."

Virgin Voyages Is Not Just For Under-50s

"The people who are coming onboard are having a fantastic time and we really do think about this as for the young at heart.

"We're getting a younger demographic, if you think about us compared to the industry -- the industry is about 55-years old and ours is sub-50.

"But what we are trying to appeal to is a different way to cruise, a different experience."

"It has great satisfaction levels and high repeat rates -- we just do it in a different way."

He added the line was also attracting non-cruisers and a more diverse set of cruisers to the brand as well. The line has gone out of its way to hire diverse crew, and entertainment and the onboard vibe is the most visibly inclusive as sea. The commitment goes down to the "ladies" themselves, the mermaids featured on the ship's bow (Valiant Lady has a Black mermaid, while Resilient Lady's artwork highlights a Latina mermaid created by a female artist with Latina and Native America roots).

"We 100% want to reflect the diversity of the world," Branson added. "This wonderful mixture of all sorts of people on this ship makes life special."

The Beach Club at Bimini is one of the stops on all of Scarlet Lady's Caribbean itineraries -- will there be a private island or a private beach club in the Med?

"And I'm sure in the years to come we'll do other projects like that. Islands we know about, so if we come across something, we'll see."

McAlpin said part of the challenge with a private club in the Med was that it was seasonal, unlike in the Caribbean.

Sustainability is at the Heart of What Virgin Voyages Does

Branson said one of the key aims for the line was to find a low carbon fuel source to power the ships.

"I'd be very surprised if ships aren't using alternative fuels or hydrogen-based fuels within 10 years."

Virgin, like the cruise industry as a whole has pledged to be carbon neutral by 2050, but this is still a long way off and the industry is looking at ways to reach this goal a lot sooner.

"We've been looking with some people in Norway about setting up hydrogen islands offshore where ships can just pull in and fill up with hydrogen and then sail off."

McAlpin added all the ships are equipped with shoreside power facilities and will plug in wherever they can around the world.

COVID-19 Came At The Worst Time Possible For Virgin Voyages

"Our timing was just about as bad as could be," McAlpin said, referring to the launch of Scarlet Lady in the U.K. in February 2020.

"I dug out the Spice Girls who were on Virgin to come to Liverpool to launch the ship and I couldn't quite work out why they didn't want to come on a cruise ship."

Famously, the ship set sail from Liverpool to New York for a showcase and then on to its planned homeport of Miami. But as it was crossing the pandemic took hold and all further planned celebrations had to be canceled and the line never actually sailed with paying guests.

McAlpin admitted that COVID had set the brand back and there was much to do to build awareness. "For two years we have not been able to market, we went into hibernation, so we are suffering from low awareness.