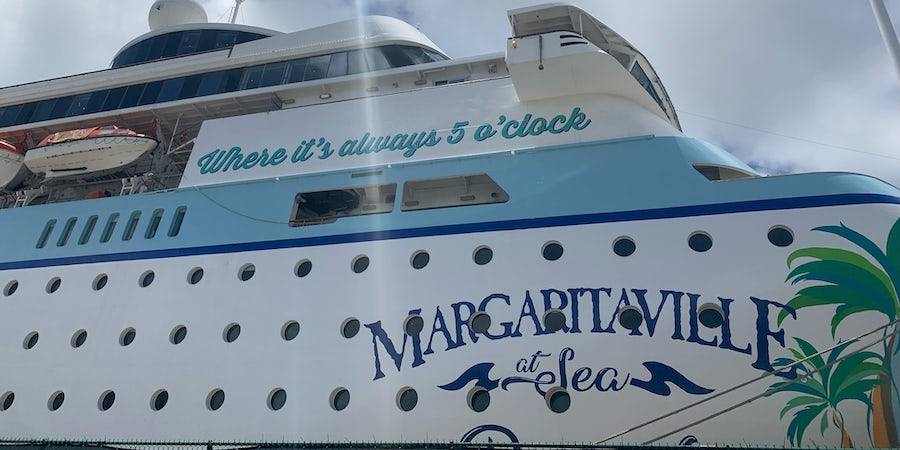 "This turned out to be a pretty good 3-minute song," the singer/songwriter/businessman wisecracked. And his comment turned out to be quite the understatement, considering that he happened to be playing his signature song on the pool deck of a 1,680-passenger cruise ship named Margaritaville at Sea Paradise.

Buffett's impromptu 10-song setlist capped the May 12 debut of the ship, which less than an hour earlier had been officially christened by godfather and NFL linebacker Shaquem Griffin. Envisioned as a logical progression of Margaritaville's brand of Flor-ibbean fun in the sun, Margaritaville at Sea offers 3-day, 2-night sailings from West Palm Beach to Freeport, Grand Bahama Island.

Travelers also have the option to expand to 4- and 6-night all-inclusive getaway packages at the Gran Lucayan Resort and the Viva Wyndham Fortuna Beach. Although Margaritaville has resorts in Hollywood (Florida) and Orlando, no packages featuring these properties are currently on offer -- although the line as said those will be coming.

While the Margaritaville at Sea product is new, the ship isn't. Formerly Grand Classica of Bahamas Paradise Cruise Line (and Costa Cruise Line's neoClassica prior to that), the vessel was built in 1991, and has undergone a couple of major dry docks/refurbishments in 2014 and 2021/22.

The transformation is significant, especially the eye-popping tropical livery -- with parrots, of course, in a nod to Buffett's Parrothead fan base, if not yet complete as hints of Grand Classica's Italian motif crop up here and there (more on that later).

We sailed on Margaritaville at Sea Paradise's one-night inaugural voyage out of West Palm Beach and here are our first impressions of the Jimmy Buffett-inspired vessel.

It's no surprise that Buffett's extensive musical catalogue is at the root of the Margaritaville brand, and the ship is no exception. Venues throughout the vessel pay tribute to song titles and lyrics, including Fins Dining Room, 5 O'Clock Somewhere Bar & Grill, License to Chill Bar & Pool, Port of Indecision Buffet and Euphoria Lounge, to name just a few. Quotes are prominently placed throughout the ship in strategic locations.

But, aside from the unscheduled appearance from the man himself (which, understandably, won't be an ongoing feature of the cruise), the best way to enjoy Jimmy's music onboard is on Deck 9, at Stars on the Water Theater. This is where the highlight of the Margaritaville at Sea experience takes place with the unique-to-the-cruise Tales from Margaritaville: Jimmy's Ship Show.

Penned and produced by Buffett and Hollywood heavyweight Frank Marshall (whose long list of productions includes Raiders of the Lost Ark, The Sixth Sense and Jurassic World), the 45-minute Broadway-style show is brought to life by a cast of six performers backed by a live five-man band. From 'Cheeseburger in Paradise' and 'Volcano' to 'Fins' and the iconic 'Margaritaville', a dozen of Buffett's hits is woven into a loosely-threaded narrative of tropical themes and beach-bum lifestyle.

The story itself felt somewhat disjointed as it works primarily in service of Buffett's songs (this is actually a critique that Buffett's last Broadway show, Escape to Margaritaville, also received). But the hits are so catchy and the cast's performance so energetic that it's easy to see past the plot's limitations. It performs better here on a ship than it did on Broadway, and cruisers will be pleased with it.

The Nightlife Onboard Delivers

The second showing of the musical hardly spelled the end of Margaritaville at Sea Paradise's night entertainment. On our cruise, the fun was just getting started on Deck 8's spacious Euphoria Lounge with trivia and adult-themed games gaining steam as midnight approached. Revelers reached a frenzied crescendo on the dance floor, moved by a soundtrack that steered decidedly to non-Buffett waters.

A two-night cruise itinerary is usually the perfect amount of time for people to let loose and blow off steam. You don't expect a ship named Margaritaville at Sea to be quiet and staid; if you're looking for a party, you'll find it here, going late into the night.

As one would expect on a ship named after a cocktail, bars are plentiful onboard Margaritaville at Sea Paradise. The aforementioned and aptly-named It's Five O'Clock Somewhere Bar & Grill on Deck 10 is the most rewarding place to enjoy the salt-rimmed tequila and lime concoction. Featuring lime-green décor and a giant blender as its centerpiece, the indoor/outdoor spot on the ship's stern serves burgers, drinks and coastal-inspired eats.

On Deck 11, the 12 Volt Bar and License to Chill Bar serve as the one-two punch of poolside watering holes. At the very top of the ship, on Deck 14, The Hangout is a circular sports-themed bar complete with numerous large screen TVs and various classic games including pool, darts, skee-ball and vintage arcade games.

Veering away from the tropical look, Stars on the Water Bar just outside of the show lounge features a more elegant style that's appropriate for the setting.

Eating Away in Margaritaville: Yes, You Can Have a Cheeseburger in Paradise

Full disclosure: I didn't get to eat a cheeseburger in paradise, nor did I nibble on sponge cake watching the sun bake. But I didn't have to amend my carnivorous habits, because our one dinner experience took place in JWB Prime Steakhouse.

A fixture in Margaritaville's resort properties, JWB is the upscale choice on board at $59 per person. Instead of a menu, we were presented with a parade of shareable plates including Angus Prime NY strip, 30-day dry aged ribeye, Wagyu short ribs and grilled branzino in a lemon-dill sauce.

The dining venue struck a departure in theme, with navy blue tones and darker wood accents that don't quite portray the breezy pastel hues of Magaritaville's tropical style. The steakhouse sits portside on Deck 8 opposite to the laid-back Fins Dining, which is included with your fare and offers the iconic cheeseburger along with other Margaritaville tropical-themed staples.

On Deck 10, Port of Indecision is your run-of-the-mill buffet. During breakfast, it can get crowded very quickly but luckily, it's connected to It's 5 O'Clock Somewhere Bar & Grill, where additional seating can be had in a much more inviting outdoor setting.

Frank & Lola's Pizzeria and the Margaritaville Coffee and Pastry Shop sit side-by-side in a food plaza-styled area on Deck 9, rounding up the ship's eateries. Of note, this area also features Everything but Sand, a collection of three boutique stores with plenty of Margaritaville and Jimmy Buffett merchandise, adding to the shopping area appeal of this deck.

The Ship Remains A Few Steps Away From Full Margaritaville Immersion

Owing to the ship's recent conversion, remnants of Grand Classica remained during our inaugural sailing. It was mostly little things: the elevators announcing each floor in English and Italian, some ship maps near elevators still showing the previous deck plans, and Italian decoration remained in certain areas of the ship, though certainly not in the Margaritaville-themed restaurants and venues.

But perhaps the most significant lingering legacy of the Grand Classico days is the ubiquitous presence of Europlug style outlets throughout the ship. While guestrooms come equipped with a volt converter/adapter, it's advisable to bring your own in case your devices run out of juice elsewhere on the ship.

Speaking of guestrooms, Margaritaville at Sea Paradise offers 658 cabins across four categories. There are 216 Interior staterooms that can accommodate up to 4 guests, and 430 ocean view staterooms that have a maximum occupancy of 2 guests. Additionally, the ship has two Junior Suites on Deck 5 and 10 Terrace Suites on Deck 10.

We sailed in one of the ocean view staterooms. At 152 sq ft, the cabin felt big enough, if a little bare in furnishings. The decoration was understated but consistent with the Margaritaville style: large, palm frond motifs and a treasure map-like map of the Antilles graced the walls, along with a handful of framed photographs of tropical destinations. The white-on-white bedding looked particularly minimalist, but upon closer look, you can make out prints of parrots in a low contrast, satin-like finish.

For Buffett/Margaritaville resort fans who are used to more spacious surroundings, these rooms could feel a step down from what you get on land. Cruise rooms are typically much smaller than hotel rooms, and the fact that the ship is older without a lot of balcony rooms could be a turnoff to resort fans.

That said, a cruise is a typically more immersive experience than a resort. We like the idea that the organizers have put forth -- that the line eventually offer full Margaritaville packages where people can have the best of both in one vacation.

Who is Margaritaville at Sea For?

As would be expected, Parrotheads and fans of the Margaritaville brand stand to gain the most enjoyment from Margaritaville at Sea, instantly picking up all the nods and inside references to Buffett's life and career.

But there is an undeniably universal appeal to the product; from the catchy and easy-on-the-ears songs to the laissez-faire attitude and cocktails-in-paradise emphasis, especially considering the length of the voyages.

Buffett himself perhaps summed it up best during his unscheduled concert on the inaugural voyage by stating: "Lately there's not enough fun in the world, so let's have some fun."