You may also like
Dismiss
What Are Tropical Cruises, and Which Is Best for You?
5 of the Best Christmas Cruises
The Best Month to Cruise Hawaii
AARP Cruises: Discounts on Travel for Seniors (and Everyone Else)
Do Kids Need Passports for Cruises?
What Is the Economic Impact of the Cruise Industry in the United States?
How To Cope With Cruising's Pause? Plan Far, Far Ahead
Your Favorite Cruise Ship is For Sale? Here's Why You Shouldn't Panic
Cruise Lovers Share "Why We Can't Wait to Sail Again!"
Step By Step: How to Submit Comments on Cruise to the CDC 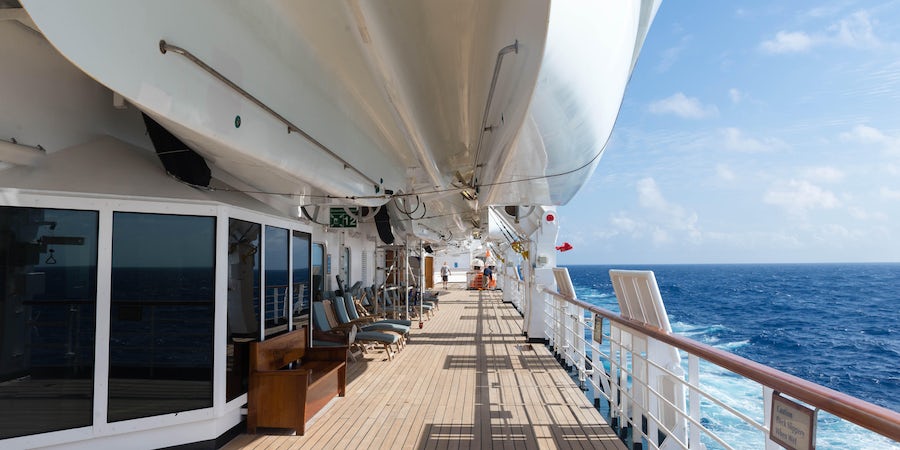 The Promenade Deck on Oosterdam

The survey -- conducted on Cruise Critic's message boards -- is one of several Cruise Critic has run in recent months in order to gauge the interests and temperature of cruisers as the cruise industry continues on its path to a full restart of operations following the global health pandemic that began in the spring of 2020 and has, accordingly, changed the travel outlook and landscape around the world.

The survey echoes what lines have been seeing from their consumers. "The recent changes in flights, the recent changes in capacity, the pricing (of air travel) just makes the consumer more willing to consider what cruises are available from the U.S.," Holland America Line president Gus Antorcha told Cruise Critic in an interview.

HAL has long focused on long international voyages that sail either one-way or roundtrip from U.S. homeports such as Boston, San Diego, Seattle and Fort Lauderdale, Antorcha said -- and that's being backed up in 2022 with demand.

"Clearly -- and we've seen this in bookings -- our guests still want to travel the world," Antorcha said. "People, more and more, are saying, 'It's time'. And we're seeing that demand."

Cruise Critic members have expressed desire for longer voyages in the wake of the global health pandemic, from back-to-back sailings to more involved sailings spanning multiple weeks and even months as travellers look to make up for lost time – and complete bucket-list trips to far-flung destinations.

But the desire to sail from U.S. homeports also reflects current worries over the global health pandemic and its related impacts.

In a survey conducted of 430 Cruise Critic readers between April 21 and May 4, 2022, 11% of respondents say they will now seek out drive-to ports as a result of rising costs, while a further 14% indicated they would change their travel plans entirely due to the cost of airfare.

Further, a full 22% of U.S. respondents said they would not travel overseas until the re-entry testing requirement for COVID-19 is dropped as a condition of entering the U.S by air. (This testing anxiety is real and affecting international bookings, cruise line presidents have also told Cruise Critic).

That same week, the top cruise destinations searched by U.S. consumers on Cruise Critic were the Caribbean (22%); Alaska (18%); and Hawaii (12%) -- 52% of all total searches for future cruises, the majority of which leave roundtrip from U.S. homeports.

Already, lines have increased deployment and presence in closer-to-home destinations like Alaska, the Great Lakes, America's waterways, Pacific Coastal sailings and the Caribbean.

Holland America Line isn’t the only game in town when it comes to longer sailings from U.S. homeports. Sister-brand Princess Cruises offers two-week sailings to Hawaii from the U.S. West Coast, 20-day explorations of the Mexican Riviera from San Diego, and even an adventurous multi-week cruise sailing roundtrip from New York (Brooklyn) all the way to Greenland and back.

Even Carnival Cruise Line -- a brand long known for its short, economy-priced sailings -- has embraced longer voyages, with a handful of 10-day journeys to Alaska from San Francisco and extended Eastern Caribbean Explorer sailings from Mobile, Alabama.

Of course, for those with money to burn, there's always the option to take a complete World Cruise. Most sail roundtrip from major U.S. ports like Miami, Fort Lauderdale and San Francisco, making these sailings perhaps the ultimate voyage to take -- all without ever setting foot on an airplane.

"I certainly think this is a trend that's here to stay," Holland America Line’s Antorcha said of longer voyages from drive-to ports. "And you'll see us work to develop more unique, interesting itineraries out of the U.S."