You may also like
Dismiss
5 Cruises That Deliver Luxury Adventures
What Is an Alaska Inside Passage Cruise?
Can an Expedition Cruise Transform Your Life? You Bet.
5 Reasons to Love Windstar in Alaska
Guide Us: Expedition Guides Divulge Polar Cruise Secrets
5 Reasons to Love Seabourn Cruises in Alaska
Why Scenic Eclipse Is the Luxury Cruise Ship for You
10 Reasons to Stay in Seattle Before Your Alaska Cruise
New Luxury and Expedition Ships Coming in 2020
New Cruise Ships 2020 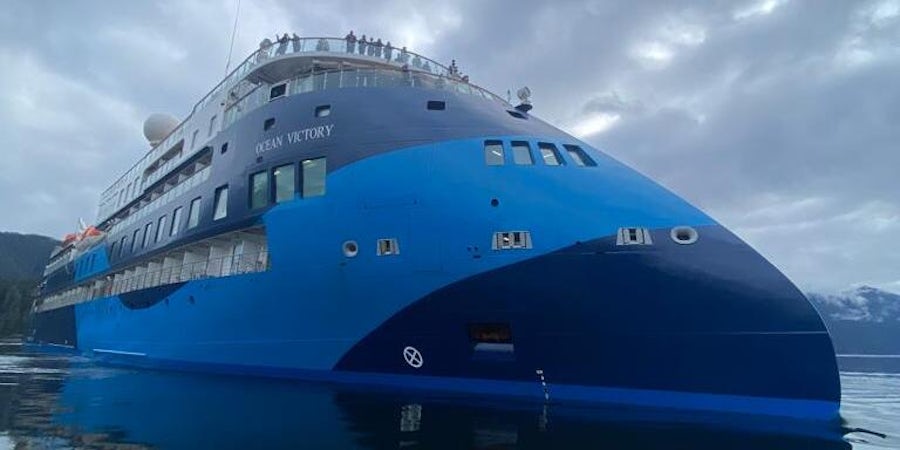 Live From Ocean Victory: What It's Like on American Queen Voyages' First Expedition Cruise Ship

The word hybrid probably best describes Ocean Victory, a 186-passenger ship, which travel advisors on a three-day shakedown cruise last week unanimously agreed is a successful and unique mix of luxury and adventure.

On the outside, the vessel is pure expedition. It features an innovative X-Bow stabilization design that gives it a smoother ride and submarine-like appearance, rear decks for launching its fleets of Zodiacs and kayaks and retractable over-water observation decks.

Inside is pure comfort, offering casual luxury that AQV is betting will appeal to a more diverse clientele than the current adventure operators whose ships have much more basic accommodations and amenities.

Travel advisor Patty Crichton, a small ship and river cruise specialist with Alaska and Beyond, called it the “best of both worlds. … It’s a combination of expedition and the ultra-high end.”

AQV founder John Waggoner says the ship and is offerings are “right in the sweet spot” between small and large ship cruising.

The inaugural season already is 80% percent sold, and he said expects sales to pick up was word spreads.

It’s not for all cruisers, of course, particularly those looking for extensive onboard amenities like multiple entertainment venues and casinos. Or as Crichton said, not for “people who want to get dressed up and bring out the jewels.”

Instead, the focus is on sailing through nooks and crannies of Alaska and Canada’s inside passages that are accessible only by small ships, and getting up close and personal to wildlife via the onboard fleet of Zodiacs and kayaks.

Still, there are plenty of perks that one would only expect to find on a more traditional luxury line. Think high tea-style afternoon snacks, cocktail-making demonstrations while whale-watching from the top deck’s glass-walled Observation Lounge, gourmet hot chocolate served up as guests step off their Zodiacs, laundry service and a variety of spacious, mostly balcony cabins and suites.

But what really sets the Ocean Victory apart are its science programs and experienced staff.

While Alaska is a new destination for AQV -- which is more widely known for its paddlewheel boats that ply the Mississippi and Columbia and Snake rivers -- the expedition team is made up of veterans who have sailed hundreds of polar and Alaska cruises.

The company has also teamed up with California Polytechnic State University, the Sound Science Research Collective and Sitka Sound Science to brings experts and students on board for daily educational lectures, hands-on demonstrations of science experiments and evening fireside chats.

The expedition team is also encouraged to dine with guests and interact with them throughout the cruise, not just on expeditions.

"The staff is amazing," said Julie Kean, a small-ship specialist with USA River Cruises. "It’s nice to see the expedition staff mingle with guests. I appreciate that. You can ask them questions throughout the day if there’s something you didn’t think of on your rafting or kayak tour. They’re friendly and knowledgeable and they’re interested in making sure you experience the expedition side of things."

Ocean Victory sails 12- and 13-night itineraries between Vancouver, B.C. and Sitka, Alaska, from May through September.

Highlights include sailing through the Fiordland Conservation area, the Waterfall Coast and past the ghost town of Butedale in British Columbia, which sits in a region where about 10 percent of the black bears are so-called spirit bears that have a gene that makes their fur white.

Stops include Wrangell, with an excursion option that takes guests via jet boat into the Alaskan wilderness to one of southeast Alaska’s largest salmon runs at the Anan Creek Bear and Wildlife Observatory, and the historic Five Finger Lighthouse at the confluence of Stephen’s Passage and Frederick Sound. That area is home to nesting seabirds, foraging songbirds, bald eagles, Steller sea lions, harbor seals, sea otters, harbor porpoise, transient killer whales and large numbers of humpback whales.

And about every other day is an expedition day, where guests have the option of exploring the Alaskan coast via Zodiac and kayaks or simply watching for whales and other wildlife from the comfort of the Observation Lounge.