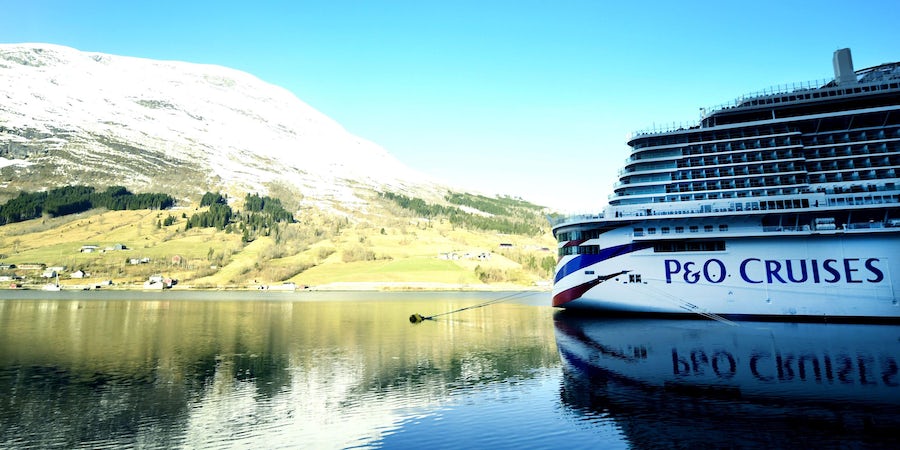 How I Learned to Cook With Marco Pierre White: Live From P&O Cruises' Iona

When celebrity chef Marco Pierre White asked me to assist with a demo on P&O Cruises' flagship Iona, it was impossible to refuse. But as I stepped onto the stage and he handed me an apron I had to tell him something very important: "I'm a terrible cook!"

Instead of scanning the lounge for a more suitable sous-chef, Marco tied my apron and whispered that all would be well.

I caught up with Marco on a 7-night sailing from Southampton to the Norwegian fjords to talk about cooking (of course), what it took to gain his three Michelin stars -- and how he once made Gordon Ramsay cry.

World-renowned chef and restauranteur Marco Pierre White is just one of a number of the line's "Food Heroes" and his partnership with the line is now in its fifteenth year.

Whenever onboard he runs cooking demonstrations, hosts dinners and holds Q&A's in the ship's theatre. For many years his home was Britannia, hosting masterclasses in its Cookery Club, but since Iona's launch last summer, he now flits between the two ships.

He's created several of Iona's menus, including those used for Gala nights, introducing entrees which deliver a sense of occasion, like Beef Wellington and Lobster Thermidor.

From now until November 2022 Iona is sailing 7-night voyages to the Norwegian Fjords from Southampton -- visiting Stavanger, Olden, Alesund and Haugesund. And it was somewhere mid North Sea, half-way to the first port, that I found myself helping Marco with a seafood risotto demonstration on the hob in front of a large crowd.

In go the onions, then the rice, followed by fish stock Marco prepared earlier. Sous-chef duties included tasting said stock which was so sensational it could have been served as a soup. Then he demonstrated how to stir. Top tip: not too vigorously. "How long will it take?" asked an audience member. Twenty minutes, apparently.

Stirring was my job; Marco fielded questions from passengers:

Who's your favourite celebrity chef?

"The Hairy Bikers -- I love that they don't take food too seriously."

Do you wash your rice before cooking it?

"Sometimes yes, sometimes no -- it doesn’t really make much difference."

None of us will ever wash rice again.

What if you haven't got time to make your own stock?

"Use Knorr…we all resort to Knorr in the end!"

Marco is an accomplished raconteur and as he popped shrimp and scallops in the saucepan, then thyme and mascarpone (which he insists works better with seafood than parmesan) we learned how, at sixteen, he started working in the kitchen of a Leeds hotel, was inspired by the Egon Ronay restaurant guide and, at the age of 25, became the youngest ever chef to be awarded three Michelin stars. It's an inspiring story of how, through grit and graft, a council-estate youngster from Leeds became a celebrated chef and restauranteur. He had passengers hanging onto his every word. Ditto at the Q&A a couple of hours later in a packed ship's theatre. Here he admitted that earning the Michelin stars was an exciting journey; trying to keep them was boring.

The risotto, incidentally, was sensational. Thank you, Marco.

Enjoying Local Cuisine on a Shore Excursion in Alesund

From this point on the risotto earned me celebrity status both on the ship and off. While climbing 418 stairs to a viewing point overlooking the fjord in art deco Alesund, several fellow passengers pointed, smiled and remarked: "You’re the risotto lady."

Other P&O Food Heroes include wine guru Olly Smith and, new for Iona's Norway voyages, is Norwegian chef Kjartan Skjelde. He's curated a once-a-voyage 6-course tasting menu at Iona's specialty Epicurean restaurant which I was lucky to experience later in the week. Despite the £28pp surcharge this sells out fast, so book before you sail. Every course was deliciously light, fragrant and fresh, from the crispy chicken skin starter to the smoked mountain trout with horseradish cream to the fillet of Jaeren coastal lamb. I was a particular fan of Skjelde's puffed rye which added a salty crunch to the salads.

Passengers have traditionally been able to book special Food Hero-led shore excursions. In Cadiz, Marco has taken guests to visit tapas bars and fish markets; in Vigo they might visit a sardine factory; in Norway the excursion is to an organic farm to taste local produce.

Whatever the excursion or destination the focus is food and, while Covid19 put a temporary pause to these excursions (there weren’t any running during my sailing) they're planned to return soon. Meanwhile guests seem equally content with Marco's cooking demos, Q&A's and book signings, all of which are free to attend and all of which proved hugely popular.

Indeed, fans were queuing up for the book signing (Marco has recently released a glossy hardback of recipes) even though it was scheduled at 9 a.m. and even though the clocks had just gone forward an hour, giving them an hour less sleep!

Eating is a major part of any cruise and my brush with both Marco and Kjartan Skjelde's cuisine made me keen to try some port-based foodie experiences. In Olden I joined a cray-fishing shore excursion.  We weren’t terribly successful at the fishing but back at base our catch -- as well as a few extra -- were tossed into a steel drum of boiling water for an off-ship early dinner. Served with baguette, a green salad and a bottle of Sauvignon Blanc, it was simple, rustic and delicious. The fish was so fresh you could taste the sea.

In Haugesund I enjoyed a two-hour RIB boat safari which took us hopping between tiny islands dotted off the mainland and spotting sea eagles. The fresh air whipping my face and the mooching around one of the islands called Rovaer (population 70) helped work up an appetite. Enter a harbour-side restaurant called Dattera til Lothe which served the best salmon salad I’ve ever ordered, with radishes, pickled onions and that now familiar local specialty: puffed rye.

Dinners on Iona Were A Highlight

Occasionally Marco and the other Food Heroes host guest dinners and for me this was a cruise highlight. Not only did I get to eat his risotto, but I got to sit next to him and chat.  This was in Iona's specialty Indian restaurant Sindhu and, when I couldn’t decide what to order, Marco stepped in with a novel suggestion. "Have the lobster main for starters and the duck for your entrée."

In between waiting for and eating the Lobster Thermidor "Sindhu Style" (baked in its shell with ginger and green chilli) I dared to quiz Marco on something I’d read on Wikipedia about him once making Gordon Ramsey cry. Rumour has it that Gordon Ramsey -- who at the start of his career trained in Marco’s restaurant -- was once found cowering in a corner in tears. Who'd have thought that possible?

What did you do or say to Gordon to make him cry?

"Nothing, he was just very emotional that day."

And that, I'm afraid, was all I got out of him on the subject, despite much persistence.

The Sindhu Lobster was sensational (just the right size for starters, Marco was right) as was the Duck Tikka Malabari Tandoori Style for mains. A lot of love had clearly gone into the cooking of it, as well as a lot of time. Time, however, is something many of us don’t have enough of. And so, before bidding farewell, I was keen to know if there was a less labour intensive way (the arm does start aching after twenty minutes of stirring) of making a risotto as delicious as his.

"Put it in the oven like the Italians do," he said.  "Use the same ingredients, four times the amount of stock to rice and, once the liquid’s absorbed, it’s ready. It tastes different but it’s still Mwah."

And that pretty much sums up my entire Marco Pierre White sailing on Iona. The cuisine, the destinations, the ship and the getting up close and personal to one of the Food Heroes was "Mwah", from start to finish.