You may also like
Dismiss
Ovation of the Seas: Designed for China
Royal Caribbean Cruise Line History
Royal Promenade on Royal Caribbean Cruises
All About Adventures by Disney Family River Cruises
8 Reasons to Cruise on a Refurbished Ship
What Are Panamax and Post-Panamax Cruise Ships?
Cruise Vision 2020: The Future of Cruising in Australia and New Zealand
5 Free Things to Do on Pacific Adventure
New Cruise Ships 2020
Virtual Cabin Crawl: Symphony of the Seas Cruise Ship 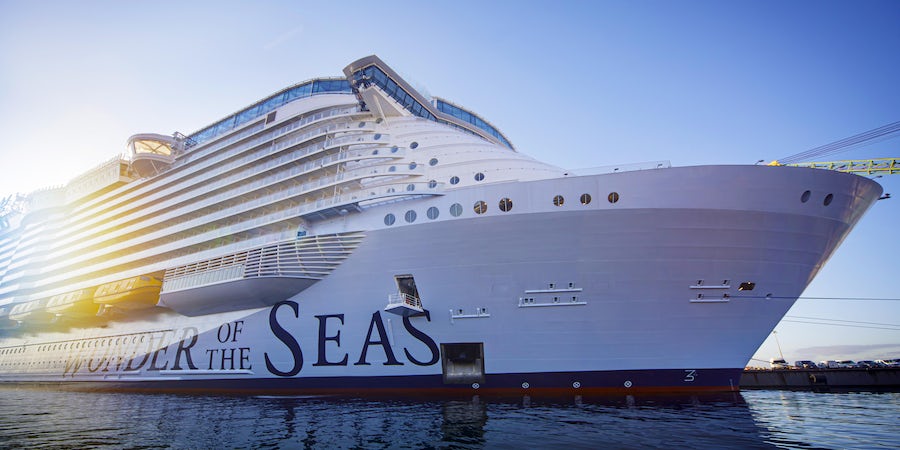 After launching in Florida last month, the 5,734-passenger ship sailed into Barcelona fresh from its two-week Atlantic crossing Thursday.

We got onboard to experience Wonder of the Seas as well as catch up with some of the Royal's most senior executives who filled us in on some of the line's plans, including expansion of the suite class neighborhood, private islands and the possibility of a 7th Oasis Class ship.

And while onboard,  the cruise line also announced a TikTok contest to find Wonder of the Seas' godmother. Read on for details.

The New Suite Class Neighborhood Will be Expanded on Future Ships

After tentatively dipping its toe into the water with the debut of Spectrum of the Seas in China, Royal Caribbean has gone all-in when it comes to providing an exclusive enclave for well-heeled passengers.

Wonder of the Seas offers 175 suites, located high up on decks 17 and 18. (Royal Caribbean added an extra deck to accommodate the new space.)

In addition, suite guests have a private lounge and exclusive dining area known as The Coastal Kitchen (in what would have been the public space of the Viking Crown Lounge area on other Royal ships); and a private sun deck, which is new to Wonder.

The line has stopped short of making the area key-card-access only, as you'll find on NCL's Haven and MSC's Yacht Club, but it can't be long before Royal Caribbean goes that way, judging by the demand the company says it has seen for the suites.

(Side note: One couple booked the Ultimate Family Suite, which sleeps eight, for the entire two-week crossing and for a few cruises thereafter -- at a cool $60,000 per week).

When asked if the line will keep expanding the suites area, Ben Bouldin, Royal Caribbean's Vice President of Europe, the Middle East and Africa,  said, "This suite class area ... sells first. We just don't have enough.

"It's something you'll see continue to grow and develop for us."

Calling the idea of a ship-within-a-ship concept, "appealing", Senior Vice President of Hotel Operations Mark Tamis, added, "We absolutely will continue to develop the suite space and the luxury space."

... But Not at The Expense of Other Guests

When asked if the expansion of this area would be at the expense of other passengers (note above the Viking Crown Lounge, a public space, was sacrificed for the exclusive use of suite guests), executives pointed out redesigns to the structure will help make sure that doesn't happen.

"If you look at the silhouette of Wonder vs. other Oasis Class ships, you can see that it's got an 18th deck, which sits on top," Bouldin said. "The goal of introducing more suites is not to be at the expense of anyone else on the ship. This ship has got so many incredible features available to everyone."

He cited the redesign of the pool area, which includes the addition of mini-golf, as an example of how the cruise line is always looking to "enhance the guest experience" for everyone, not just suite guests.

"The ship really has taken even our already successful Oasis Class formula forward another step, and that's irrespective of what we've put on for the suite class guests," Senior Vice President of International Sales Sean Treacy said.

(Speaking of Oasis-class, when pressed about whether there could be another Oasis class vessel after Utopia of the Seas, Treacy responded: "It's not a no, it's not a yes.")

In October 2019, Royal Caribbean President and CEO Michael Bayley announced the purchase of a private island in the South Pacific, as part of the line's continued move into developing private islands, such as Perfect Day at CocoCay.

However, the pause in cruising has delayed the development of the island, near Vanuatu, with no launch date in sight.

"We did announce we have a development in the South Pacific called Lelepa, which would be our private island in the South Pacific," Bouldin said. "It's a stunning destination and we do plan to continue that, but obviously with the pause that's been delayed quite a bit, and we don't have an exact time frame on when that will open up just yet, but stay tuned."

Occupancy Levels Will Continue to Increase Over the Summer

In keeping with plans, execs also confirmed occupancy levels would continue to ramp up over the summer, to top more than 100% by the end of the season.

The ship sailed with 3,600 passengers on its transatlantic voyage, but it was not clear how many people would be onboard its first revenue sailing around the Mediterranean.

"We will not be sailing at full capacity on Wonder's first cruise," Bouldin said. "The reality is the season will start more gradually than that, but there is a good number of passengers on that sailing.

"On the crossing we had 3,600 passengers and the number of passengers builds as the season goes through.

"The expectation is that we will get beyond 100% load factor as we get through the season, and that’s pretty much the story across the fleet."

The War in Ukraine is not Affecting Demand

In an effort to keep passengers safe and give them peace of mind while war continues in the Ukraine, Royal Caribbean has had to make some modifications to itineraries, including removing St. Petersburg stops. (Many cruise lines have had to make the same changes, and itineraries, especially to the Baltic Sea, remain flexible.)

"We are very capable of flexing where our guests come from because we're not dependent on just one market," Treacy said. "So while we may see softness from one market, we can grow in others like the U.K. and Spain and others in Europe."

Bouldin confirmed for those markets close to Ukraine, the war is having a big impact on consumer confidence, but added, "It is surprising for us how resilient people are and people still need vacations in their lives."

He added that the line was making every effort to support teams in Ukraine and was also involved in a number of relief-based projects with the Red Cross."

Cost of Living Increases 'Frightening,' But Not Affecting Bookings -- Yet

As cost-of-living increases are seen worldwide, especially with a rise in the cost of fuel, shelter and food, it's fair to say the world is bracing to see how this will effect the hospitality industry.

"At the moment it's frightening in terms of the cost-of-living increases," said Bouldin, referring specifically to the U.K., though all markets, including the all-important North American market, are feeling the pinch. "Fortunately, we are still seeing very strong booking momentum.

"But obviously we keep a close eye on it, and I'm sure everyone is hoping inflation doesn't get any higher."

The line is seeing higher booking in this period than it did in the same period three years ago, which he attributed to the fact people have not been traveling for two years.

However, Bouldin did say that certain markets had struggled, but as with moving ships, the line could concentrate on other regions within Europe, the Middle East and Africa.

At time of writing, Royal Caribbean is about two weeks away from having its entire fleet back in service (Rhapsody of the Seas will be the final one).

Treacy said the line would not be doing this unless the demand was there: "We wouldn't do that if we didn't have the confidence that demand is there and that we were seeing the demand.

"We are very thankful that we're seeing the demand from our guests really globally to operate all of our ships."

He added that the line was "very optimistic" -- "we launched two new ships in the midst of the pandemic -- this ship and Odyssey of the Seas."

"And we have got another ship coming in Icon, the first new class of ship will be launching in over a decade, so we've got a lot of plans for growth and we are not stopping any of those plans."

Royal revealed while we were onboard that U.S. users of the popular video-sharing platform can now take part in the #SearchForWonderMom contest by nominating a mom who inspires those around them to discover, wonder and make memories.

The call for submissions is open through 11:59 p.m. EDT May 16,and the winner will be announced on Royal Caribbean's TikTok this summer.