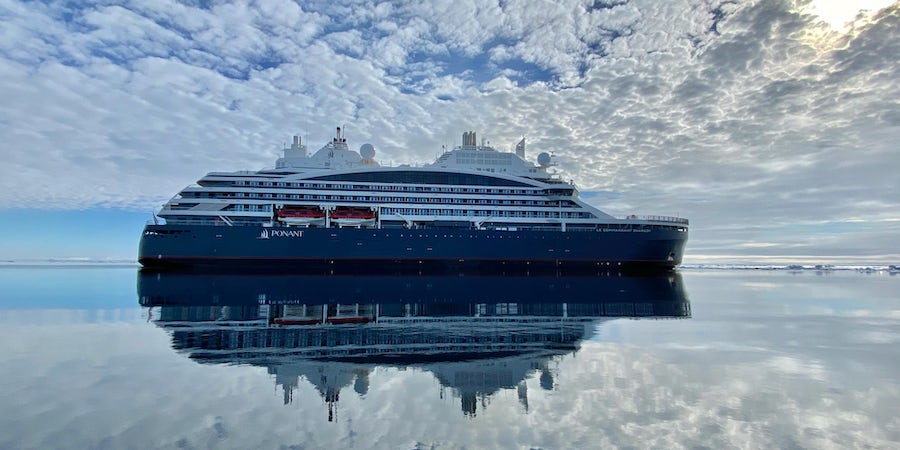 Le Commandant Charcot's captain broke the news early Sunday evening. Ponant's newest ship would not be departing Cherbourg, France, that night as scheduled. Instead, we'd be docked until Tuesday, due to supply issues.

Instead, the culprit was lubrication oil, or a lack thereof. Blame it on warring Russians disrupting the supply chain. Or possibly on French labor practices. Not a lot of business gets done Sundays in France.

Fortunately, we were in no hurry. This voyage of Ponant's year-old Le Commandant Charcot was a repositioning cruise from Cherbourg to Reykjavik, Iceland, where the ship is embarking on a summer season of northern voyages. Upcoming itineraries include Iceland, Greenland, the Northwest Passage and the Geographic North Pole.

The upside of the delay: "At least for the people who (get) seasick, we are not at sea," joked Capt. Etienne Garcia, a silver-haired sea captain who looks as if he stepped right out of central casting.

Our planned six-night passage, now reduced to four nights at sea, had no port calls. So the delay merely gave the 111 passengers (many of them invited travel agents and a few media types) a chance to remain on terra firma for a couple of days, while enjoying a bounty of ship's amenities.

The sprawling La Cite de la Mer Museum lay next to our dock in Cherbourg. Ponant would pay the admission fee, the cruise director announced. A woman seated behind me muttered, "Typical Ponant." I perked up my ears expecting criticism to follow.  It didn't.

"They're taking care of everything -- even the museum admission," she said.

Many of the paying passengers were veterans of this French cruise line and presumably were taking advantage of a reduced tariff, given the lack of shore stops. This is, after all, first and foremost an expedition ship that attracts a clientele eager to visit the planet's polar regions guided by skilled interpreters.

Charcot is also a quintessentially French ship. French is the onboard language, though presentations and instructions are repeated in English. Most of the crew are fluent in both languages.

At 394 feet long and 92 feet wide, the 123-cabin vessel is larger than Ponant's other expedition ships. And it sports features not often -- if ever -- found on such vessels. A promenade wraps around Deck 5. There are not only two small outdoor pools (one heated), but a sizeable heated indoor resistance pool. (Without the resistance function engaged, it took me six strokes to traverse it.)

Charcot's design-driven interiors exude low-key sophistication. Calming taupes and grays rule the color scheme, and a mix of materials on walls and ceilings add texture and depth. Even the expedition rooms -- dubbed "mud rooms" on many expedition ships -- are nice. Two spacious carpeted areas with sleek benches provide a comfortable place for passengers to get in and out of their expedition outerwear.

These rooms have Nordaq water stations, where guests can refill metal flasks issued at the start of the cruise. The Nordaq system transforms seawater to tasty drinking water (still and sparkling). Water is delivered to cabins in reusable glass flasks and is just one of many sustainability measures in place. You won't see plastic bottles on this ship. Even the drinking straws are glass.

"Sustainability is not a trend. It's a focus," declared Frederic Jansen, the Ponant "ambassador" who was showing us around.

Works by 30 artists adorn the public spaces. Front and center is a 30-foot-tall LED screen in the atrium whose dreamy, colorful abstract images are constantly morphing to the accompaniment of ambient music. Oversized photos of frozen landscapes -- a fur-skinned tepee, soaring ice walls, dogsled teams -- line corridors on stateroom decks. Lounges sport black-and-white photos of early polar explorers. Among those depicted is the ship's namesake, John Baptiste-Charcot, the so-called "gentleman of the Poles." He died in a shipwreck off Iceland in 1936.

Another Charcot standout: a scientific lab that hosts visiting researchers, who in turn, deliver presentations to passengers. On this sailing, a Duke University biochemistry professor and a National Oceanic and Atmospheric Administration scientist enlightened us about the oceans’ role in climate change.

Cuisine is a Standout

But the ship is at its French-iest in the dining rooms and lounges. Its fine-dining restaurant, Nuna (Inuit for Earth) is the first restaurant at sea to boast the Michelin-starred chef Alain Ducasse imprimatur. I never had a disappointing meal there -- or anywhere, for that matter.  With its crisp blue-and-white tablecloths, the ship’s elegant buffet restaurant, Sila (Inuit for Sky) could be mistaken for a fine-dining venue. Even the poolside, Inneq (Inuit for Fire), with its signature croque Charcot (a grilled sandwich with black truffle), feels special. Breads and pastries are made from scratch (not pre-made doughs). And the desserts are worth every calorie.

The house Champagne, Veuve Cliquot, flows freely. Grand Cru wines are available by the glass (for an extra charge).  Bordier butter, dubbed the best in the world by credible sources, is on the table. Bath products are from Diptyque, a Parisian luxury parfumerie.

At the captain’s farewell in the ship’s soaring atrium, attentive, white-gloved waiters refilled Champagne glasses. A line formed at the self-serve caviar station. Images on the soaring LED screen, dubbed Oscillations 2021, provided a colorful backdrop to the scene as we sailed north into a slender ribbon of pink light.