You may also like
Dismiss
King Crab Fishing in Norway on a Cruise
All About Adventures by Disney Family River Cruises
5 Reasons to Love Seabourn Cruises in Alaska
Pictures of Carnival Panorama
8 Creative Ways to Work Out on a Cruise Beyond the Gym
How to Survive a Cruise With Kids on an Adult-Focused Ship
5 Free Things to do on Carnival Splendor
9 Reasons to Get Excited About P&O Cruises' Iona
Pictures From the Ultimate Disco Cruise
Live From Ambassador Cruise Line's First Ship, Ambience: Hits & Misses 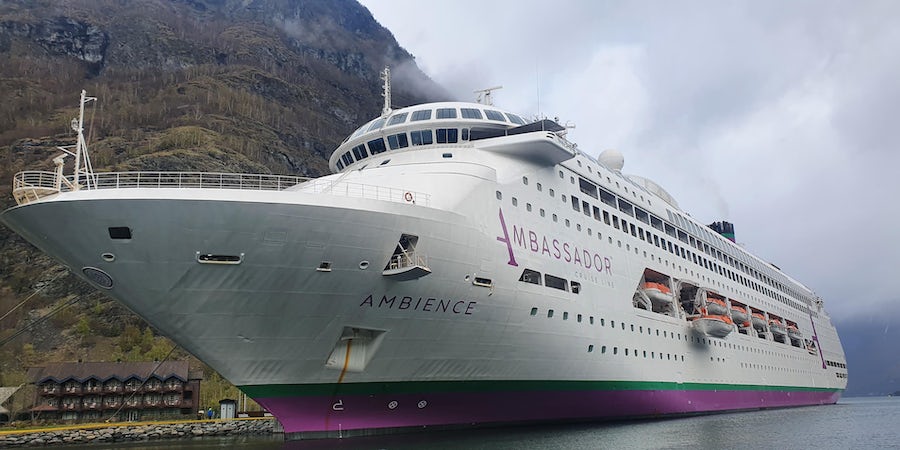 The first sailing on Ambience cruise ship was a maiden voyage to Hamburg, followed by a seven-night "Springtime Fjordland" sailing -- which we joined.

We were also onboard for an overnight in Tilbury, where we got a taste of the ship, but were keen to try out a sailing.

Here are our first impressions from our Norwegian fjords cruise on Ambience:

Teething Problems and Work on Ambience is Completed

On our overnight, we mentioned that much of the top deck spaces on Ambience were not ready for service ahead of the maiden voyage.  Work has now been completed around the main pool area, the hot tubs are filled (although they weren’t in use while we were onboard) and the Active Studio has been fitted out with new flooring and yoga mats ready for sessions. During the two sea days in particular, the decks were full of passengers enjoying the blue skies and fresh spring air.

Overall passengers seemed pleased with the service and facilities on Ambience, but like many early sailings for an older, refurbished ship, we did hear a few complaints about air-conditioning in the cabins and issues with toilets/plumbing. But from speaking to those onboard, crew worked hard to resolve things quickly.

Our superior twin outside cabin on Deck 9 hadn’t been included in the latest refurb, and while the first few days it was rather warm in the cabin, the air-conditioning soon kicked in and was extremely comfortable.

Speciality Dining on Ambience is Exceptional

We've been hugely impressed with not just the variety of food onboard, but also the quality of it.

For a relatively small ship, there are three speciality dining options which we were able to sample. First up was Saffron, the Indian-inspired restaurant on Deck 12 (which sits at the aft of the ship behind the Borough Market buffet restaurant), which carries a charge of £14.95pp. The meal begins with a herbal-infused non-alcoholic "mind cleansing" drink -- and while we like the idea, it wasn’t really the tastiest and something most diners left. The food however was superb; starters include the usual fare of naan bread, samosas, chicken tikka and paneer, and the mains feature a stand out Thali, made up of a selection of smaller Indian dishes (meat and vegetarian options available).

Next up was Sea & Grass, on Deck 12 (and a great spot for a sunset) -- we warn you, go hungry. For an additional £24.95 (0r £29.99 with wine pairing), this seven-course (plus sorbet) meal serves up a good selection of seafood, meat, salads, and not forgetting the cheese course.

Finally, there's Chef’s Table, which at £89pp isn't cheap, but it’s a whole evening's experience, spread across eight courses. Beginning with an amuse-bouche, guests are then given a tour of the galley with the executive chef before sitting down for the main event (including wine pairings) in a private area of the ship's main restaurant, Buckingham. During our meal we had one of the tastiest desserts we've had in a while -- a chocolate melting dome with caramel sauce.

Treat Yourself to the Spa

The Green Sea Spa on Deck 2 hasn't changed since its most recent incarnation sailing as P&O Australia's Pacific Dawn, but it’s a large, relaxed space for a spot of pampering.

Within the spa there's a thermal suite made up of a steam room, sauna, relaxation area and eight treatment rooms. We were treated to a reviving facial (45 mins, £59) and left feeling fresh-faced and revived -- mission accomplished. The gym has also been kitted out with new equipment including cardio machines and a large selection of weights.

Entertainment & Excursions Are Tailored to Passengers

For Brits, Ambience's entertainment line up hits the sweet spot -- from energetic shows in the Palladium and pub quizzes in the Purple Turtle, to more sedate classical tunes in the Botanical Lounge. Ambience will host themed cruises throughout the year and our sailing was no exception featuring the "Voices of Radio" legends Mike Read, Chris Baird, Mark Wesley, Louis Rodgers and Tony Prince who took part in Q&As, quizzes and DJ sets.

While passengers onboard were largely mature cruisers, they were always keen to get involved in events on and off the ship -- "destination experiences" as Ambassador calls them, were well attended and varied with coach tours to popular spots, to more adventurous RIB boat safaris and hiking in the fjords.

A Few Final Thoughts on Ambience

As the first new British line in a decade, Ambassador is aiming to offer traditional, value no-fly cruises for the over-50s. And judging by the passengers on our sailing, they are doing just that -- many we spoke to were ex-CMV passengers excited for a new ship in Ambience, and there were plenty of new-to-cruise who were intrigued to try the ship and itinerary.

Ambience has now largely ironed out its kinks and with outstanding work complete, we're sure there will be a loyal following going forward.