You may also like
Dismiss
Arctic Cruise Tips
Can You See The Northern Lights From A Cruise Ship? The Best Cruises for Viewing the Northern Lights
5 Cruises That Deliver Luxury Adventures
North Pole Cruises: Your Guide to Arctic Trips to the North Pole
Polar Bear Cruises: Best Arctic Sailings for Polar Bear Spotting
New Luxury and Expedition Ships Coming in 2020
New Cruise Ships 2020
The 10 Most Popular Episodes of “Cruising with Jane McDonald”
New Expedition Cruise Ships Coming in 2021 That We're Excited About 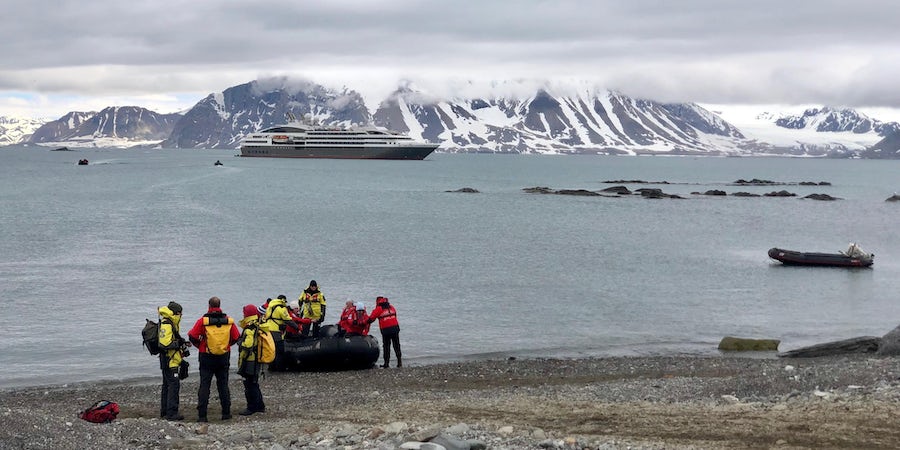 After Antarctica, an expedition cruise to the remote and rugged Arctic is on the bucket list of many would-be explorers. Better still, the number of cruise lines offering Arctic cruises in 2022 continues to expand, with some cruise lines even increasing their deployment in the Arctic.

One line --Viking -- was forced to cancel its Artic cruises aboard the new Viking Polaris due to pandemic-supply chain issues that have delayed the launch of a number of new ships this year.

But there are still a number of opportunities on other expedition lines to catch the Northern Lights, spot polars and take in the majestic landscapes of the far north -- including several cruises through the famed Northwest Passage and the lesser sailed Northeast Passage.

Here are some of the cruise lines offering Arctic cruises in 2022:

French luxury expedition line Ponant has four ships dedicated to the Arctic region this year, including Le Boreal, which is scheduled to sail a 24-night Northeast Passage itinerary beginning August 28, 2022 from Tromso, Norway, to Nome, Alaska.

Like most Baltic cruises this year, Ponant’s web site notes that Russian stops on that sailing have been substituted, although it hasn’t yet detailed the changes. The line’s website says only that "alternative itineraries are being assessed."

Also scheduled to sail the region with a variety of itineraries that include the North Pole, the Canadian Arctic as well as cruises that makes stops in Greenland, Iceland, Norway and the Canadian Arctic and Norway are Ponant’s L'Austral, Le Bellot, and the line’s newest ship, the high-tech icebreaker, Le Commandant Charcot.

Le Commandant Charcot, which is the very first hybrid-electric polar exploration ship powered by Liquefied Natural Gas, or LNG, is also scheduled to sail one cruise through the Northwest Passage this summer, a 24-night journey from Reykjavik to Nome, departing September 7.

And L’Austral is set to sail a special Northwest Passage charter for Abercrombie & Kent. That 23-night sailing from, Montreal to Nome, will be hosted by A&K Founder Geoffrey Kent.

This 14-ship Norwegian expedition line has two Northwest Passage cruises scheduled this summer, the first a 19-day cruise aboard the polar expedition ship Fram departing August 17 from Reykjavik, Iceland, then sailing along Greenland's south coast and through the Northwest Passage to Cambridge Bay.

The second is a 26-day sailing aboard Hurtigruten's trendsetting Roald Amundsen from Vancouver to Halifax, Nova Scotia, via Baffin Bay and the Candian Arctic, navigating ice floes and some of the country's most remote islands along the way.

Hurtigruten also offers several other itineraries this year in and around the Arctic Circle, including a 13-day late autumn expedition cruise departing October 22 from Tromso, Norway to Amsterdam onboard MS Spitsbergen.

The line also has several 16-day cruises planned in the North Sea around Greenland aboard its newest ship, the 528-passenger Fridtjof Nansen.

Highlights include glaciers, fjords and the Norwegian coast, with stops on Heligoland Island, Bergen and Hamburg.

This long-standing adventure line has two ships, Ultramarine and Ocean Adventurer, scheduled to sail 25 seven- to 20-day itineraries around the Arctic Circle from May through September, including four ranging from nine to 17 days through the Northwest Passage.

Other options include the 14-day "Under the Northern Lights: Exploring Iceland & East Greenland" itinerary; a 20-day sailing of the western Arctic through Canada and Greenland; a 15-day cruise to three arctic islands, Iceland, Greenland, Spitsbergen; and, of course, polar bear- and Northern Lights-focused itineraries.

One 14-day polar bear-focused sailing roundtrip from Oslo June 10 through 23 is a unique voyage aboard the line’s newest, most luxurious expedition ship, Ultramarine. Rather than follow a set itinerary, the focus is on finding polar bears and other wildlife from the ship, which has 20 quick-launching Zodiacs for those unexpected sightings.

The 76-cabin ship also features expansive observation decks. Even better, 85% of the cabins onboard Greg Mortimer have their own balcony.

The line also offers a variety of other Arctic Circle itineraries on Greg Mortimer, including options to Iceland, Greenland and Svalbard.

Silversea has a total of 16 cruises scheduled across Greenland and the Arctic Circle, with departure dates running between June and August of 2022. The line's iconic expedition sails either between Tromso, on mainland Norway, and the remote outpost of Longyearbyen, on Svalbard; or roundtrip from Longyearbyen.

Most sail between Norwegian ports, but there are few with departures or arrivals in Nome, Vancouver and Greenland -- including a Northwest Passage transit departing August 20, 2022, from Kangerlussuaq, Greenland, with options to disembark in either Nome on September 17, or in Vancouver on October 5, 2022.

Another leader in luxury cruises, Seabourn has eight sailings scheduled in the Arctic Circle this season onboard its new expedition ship, Seabourn Venture, which debuts this July.

The ship will carry two submarines, along with a complement of double sea kayaks and 24 Zodiacs, enough to accommodate all onboard guests at once.

Itineraries include a 28-day sailing through the fjords of Greenland and the Canadian Arctic, and a 14-Day "Legend of the Icelandic Sagas," which sails roundtrip from Reykjavik to Greenland before making a near full circumnavigation of Iceland on its return journey.

Seabourn also offers a 13-night sailing around the northern isles of Iceland, departing July 27 from Tromso and returning to Oslo on August 8.

While most of the lines offering Arctic voyages this year are luxury or small-ship expediton lines, big-ship lovers aren't left out of the fun, either.

Royal Caribbean will offer two unique Arctic Circle cruises scheduled in June and July onboard a more traditional ship, the 2,702-passenger Jewel of the Seas.

The 12-night itineraries are set to sail roundtrip from Amsterdam through the fjords and along the scenic coast of Norway. Stops include Molde, Tromso, Honningsvag, Alesund, Flam and Kristiansand.