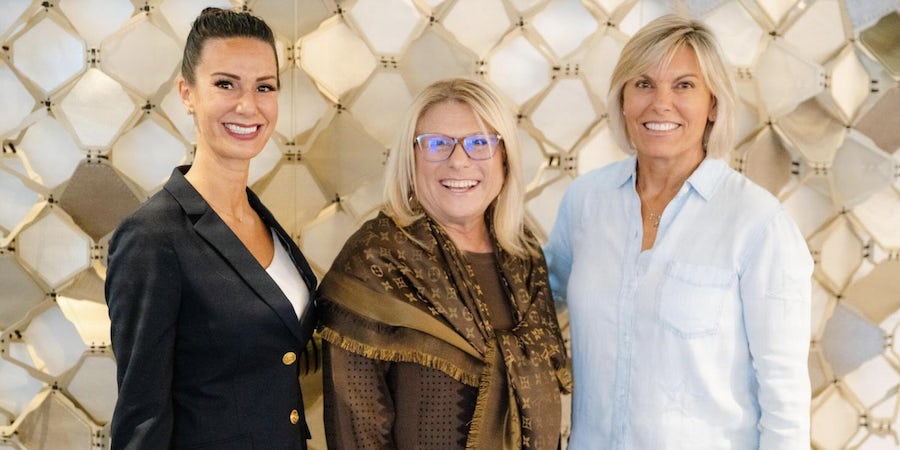 Captain Sandy Yawn from Bravo's 'Below Deck Mediterranean' Takes Her First Cruise! Live From Celebrity Beyond

Find out why Captain Sandy from Below Deck is excited for her first cruise, and why she's such a fan of Celebrity's Captain Kate.

Strong women leaders, female captains -- when you think about it, it makes sense that captain Sandy Yawn, the firm yet caring leader of the popular "Below Deck Mediterranean" reality show, would choose Celebrity Cruises for her first ocean cruise sailing.

After all, Celebrity Cruises has Lisa Lutoff-Perlo at its helm as president and CEO. There's captain Kate McCue, the first female captain of a mainstream cruise ship, who just happens to be a social media sensation. And there's the line's commitment to building female-centric leadership not only throughout the company, but particularly through male-dominated Bridge positions.

That's exactly how it went down -- through women-empowered networking. Yawn met Lutoff-Perlo through an introduction; the two shared the stage for an American Cancer Society fundraiser. (Yawn is a survivor of kidney cancer.)

Cruise Critic sat down with yacht captain and author Yawn for a brief conversation during a mini-sailing on Celebrity Beyond. Here is an edited Q and A:

Cruise Critic: Tell me a little bit about how you met (Lutoff-Perlo?)

Sandy Yawn: When I met Lisa, it was an instant connection because she's so humble and kind. I'm coming out with a leadership book (in October 2022), and I wanted a female CEO who could read my book and give me an endorsement. And she did.

I'm so grateful I met her because of my experience on this ship. Everything I've learned about Lisa, she's truly a humble servant. Being a leader is dealing in hope. And that's Lisa.

CC: One reason people, particularly women, love you on the show is that you're an amazing manager and leader. You're in these great locations (on the yacht) and you're dealing with people who have never worked on boats before. When you've talked to Lisa and Capt. Kate, what sort of things have you taken away from each other?

Sandy Yawn: Dedication. Professionalism. True leadership. It's so nice to be able to see women in my industry who are in these roles. I'm in the maritime industry, and the cruise industry is the maritime industry. I had no idea how many people are employed by one ship. ... I can't imagine what the cruise ship brings in for people (in revenue) when they dock for provisioning. That creates jobs. And I think that's incredible.

I have to say this, I had a mentality of "Man, I'll never do a cruise ship." Because I'm in a superyacht bubble -- why would I do that?

But from the moment I walked on this ship, I knew -- it's beyond the super yacht experience. I mean it. These people (the crew) are so happy to be here. They don't have an expectation of, "Oh my God, how much tip am I gonna make?" They have a gracious attitude, and it all starts from the top. And that's because of Lisa.

It's actually like a super yacht on steroids. It's such an incredible feeling when you walk onboard. When clients come onboard, you should feel this way. I wonder if they do (on the super yachts). I hope that I'm able to do what this cruise ship does for their clients.

CC: What I love is how your face lit up when you talked about this being your first cruise. Besides the service level, what else have you learned about cruising?

Sandy Yawn: It's the cabins, it's the layout. You have a pillow menu! That's pretty incredible. We don't have a pillow menu onboard our boats! The linens they use, it's so crisp and white. It's the cleanliness of the ship. It's beautiful! The food, you have a restaurant from a Michelin star chef (Daniel Boulud's Le Voyage). I mean, come on, we don't have that. We have great chefs, but this is far beyond the superyacht experience.

I think Celebrity as my first ship, I think I've been spoiled. I think they really have their finger on the pulse of what people want. For the people who aren't going to spend $500,000 or $1 million for the week can come on this vessel and have the Presidential Suite for a week and have that superyacht experience. That's what I feel. This feels like a superyacht experience with all my friends.

CC: What was it like to watch Capt. Kate pull out of Southampton on this ship? Because you were there on the Bridge!

Sandy Yawn: That's right! There were 27 knots of wind gusts pushing her off the dock. But I was watching her thrust toward the dock because this is a massive vessel. Once the wind gest momentum, it's hard to bring it back. When I saw her pull off the dock, there was a ship right in front of us. I thought, she's coming off and going forward -- of course, there's a pilot onboard -- but still, she's at the helm. And I thought, I would be losing my mind right now!

The wind was a big factor in her turn. She turned that boat around and I looked at her stern and it was moving really fast. Like she had, I don't know, three knots on the stern pushing toward the wind. I said, "That's going to be a hard turn." I'm a captain, you knew it, you saw it.

And she did it with such grace. I asked her after and she said, "That was stressful." The reality is that people don't understand how stressful her job is.

I was laying in the cabin last night and we hit a couple of waves. Leah (Shafer, Sandy's girlfriend) goes, "What was that?" I get up and I looked. It was a wave. I'm sure Kate came out of her cabin. I know Kate felt that and I can guarantee that woman got out of bed and came out and looked at what was done.

It's so interesting because the lives she has onboard are tenfold or hundredfold -- can you be imagine being responsible for 3,000 passengers (Celebrity Beyond has 3,260 passengers plus crew). I can guarantee that she sleeps like this -- (Sandy winks). That's why she winks. She always has one eye open.

I love how she commands her bridge. She does it with grace, and she's of service to her crew. That's what makes a true leader is being of service to your crew staff. That's what she does every day and all of these other people surrounding this ship, because they know hope floats.

Now that I've experienced (going on a cruise), I've got to tell all my captain friends. My peers thought the show was terrible for our industry. But it helped it. People had no idea they could charter a yacht. And that's the same here. This ship is changing the story of future cruises.

I'm not saying that because I like Lisa. Listen, to get here was not an easy task, but I'm so grateful I made this happen. I have a busy life and now I really want to go on a cruise!

CC: That's so great to hear! Thank you so much for your time.