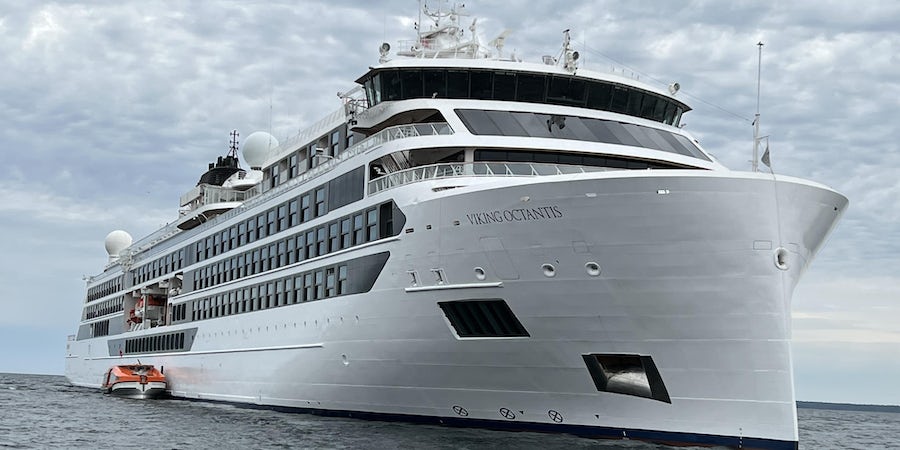 The hottest cruise destination might just be one in your own backyard. And one of the newest expedition cruise companies in the industry thinks it has the best option for sailing there. Viking Great Lakes cruises are grabbing the attention of travelers eager to try something new. And with two new expedition ships, Viking Cruises will deliver learning and adventure in style.

Viking's cruises on the Great Lakes have proved so popular, much of the inaugural season on Viking Octantis sold out by April. Demand is so high that Viking has decided to deploy its second expedition ship, Viking Polaris, to the region in 2023.

Here's what you can expect on a Viking cruise on the Great Lakes.

Viking is cruising to the Great Lakes in 2022 on Viking Octantis. In 2023, Octantis will be joined there by sister ship Viking Polaris.

The two expedition ships carry 378 passengers apiece and blend nature exploration with comfort and luxury. Both ships have a wide variety of restaurants, comfortable and spacious cabins, and a highly credentialed expedition team whose aim is to help guests learn about the destinations they visit and the creatures that call the Great Lakes home.

Viking Octantis and Polaris are sized to perfectly fit through the narrow Welland Canal, which connects Lake Ontario and Lake Erie in the Canadian province of Ontario. In fact, Viking's newest expedition ships were supposed to be wider, but a change to the blueprints was made when it was determined they would be slightly too big to make it through the canal and transit from the St. Lawrence Seaway to the Great Lakes.

Viking Great Lakes cruises offer a well-rounded variety of port visits, with big cities like Toronto and Milwaukee and lesser-known spots like the Apostle Islands in Wisconsin and Silver Islet in Ontario, Canada. The commonality of all Viking Great Lakes itineraries is that they visit a combination of U.S. and Canadian ports.

The Viking Great Lakes cruise season runs roughly from April through September, and itineraries have been popular with cruisers, many who are North American guests looking to explore a little closer to home.

Viking's 15-day itineraries visit all five of the Great Lakes, giving passengers a chance to traverse the Soo Locks as well as visit Niagara Falls. Homeports for this one are either Duluth, Minnesota, or Toronto. The shorter, eight-day cruises use either Thunder Bay, Ontario, or Milwaukee as a homeport and visit lakes Huron, Superior and Michigan. These, too, go through the Soo Locks, dubbed the “Linchpin of the Great Lakes” by the United States Army Corps of Engineers.

Viking Octantis and Polaris offer a wide range of activities and amenities. For starters, there's a 36-person expedition team, which includes scientists, marine specialists, naturalists and guides. This team shapes your cruise with lectures and on board research opportunities in and outside of the onboard Laboratory. The team also guides passengers in port and ashore and is available to answers questions in the casual setting of Expedition Central.

Each ship is equipped with a wide range of expedition gear, including two yellow submarines (named Paul and George on Octantis and dubbed George and Ringo on Polaris) and two high-end Special Operations Boats, which are comically called SOBs. These military-grade vessels offer comfortable, high-speed journeys and are loaded and unloaded from inside the cruise ship. Rides on all these are free, though they require reservations and are subject to weather.

Lectures routinely take place, mostly on subjects related to the Great Lakes and the geology, history, and wildlife there, in the ship's high-tech Aula theater, which offers expansive 270 views thanks to the floor-to-ceiling windows, and a giant 4K screen.

At least one excursion per port is included in the price of your fare. In most ports on the Viking Great Lakes Cruises the list of included activities is much longer.

Are the Submarines Being Used on Viking Great Lakes Cruises?

Yes! On current Viking Octantis Great Lakes cruises, the submarines, along with the ship's 16 kayaks, two SOBs, 17 Zodiacs and dive boat, are permitted to operate in Canadian waters, but not (yet) in U.S. waters. (Neither Octantis nor Polaris is registered in the United States, and therefore, the Passenger Vessel Services Act of 1886 prohibits the ships' expedition equipment from being used in U.S. waters.)

If you're booking this trip, be aware that the "toys" will not be used in U.S. waters and are sometimes unavailable due to weather or technical conditions. The submarines, in particular, require that passengers sign a waiver, acknowledge they can transfer to and from the sub from a zodiac, and agree to be weighed. If not being able to ride in the sub or use some of the other special equipment would ruin your vacation, this probably isn't the right trip for you.

Visiting the Great Lakes by expedition ship offers the opportunity to see the region in an intimate way.

According to Reagan Errera, a research ecologist with the National Oceanic and Atmospheric Administration's Great Lakes Environmental Research Laboratory, guests will have plenty to take in on their cruises to the region.

Underwater, looking out of the submarine windows, that could be salmon, whitefish, lake trout, sturgeon or pike. And as anyone who remembers Gordon Lightfoot’s hit song, The Wreck of the Edmund Fitzgerald, there might be some shipwrecks. (Visit The National Marine Sanctuary in Thunder Bay to see almost 100 historic shipwrecks.)

Ashore, the Great Lakes are a birders paradise, a great spot to spot bald eagles, loons, sandhill cranes and cormorants. To aid in spotting, Viking has an ornithologist on its expedition team, as well as an onboard display of full-size, realistic felt birds of the region. The birds, works of art in themselves, are part of a larger collection of birds Viking commissioned from Vermont felt artist Susan Beal. Wolves and bears are also found in the region and along the shores and may occasionally be spotted from the safety of zodiac and SOB rides.

"It's in our backyard, and it's one of the largest ecosystem services we have in the world," Errera said of the region. "I don't think people have had a chance to explore them and see how big they really are."

Onboard, passengers are able to have in depth discussions about the science of the area, Errera said. This includes lectures and even lab work, as Viking's expedition ships are working science vessels, and they engage their passengers in "citizen science."

For example, both Octantis and Polaris are the first civilian ships to join the list of 102 official weather balloon launch stations sanctioned by the U.S. National Weather Service. On each voyage, passengers will witness (weather permitting) at least one weather balloon launch and, in Exploration Central, watch as the balloon's transmitter sends back wind, temperature and pressure data from altitudes that can reach 18 miles.

For Errera, who exudes excitement talking about the Great Lakes, the aim is to have people leave feeling like they have a better understanding and a new connection to the region.

"I really hope people walk away (thinking), 'I had no clue'," she said.