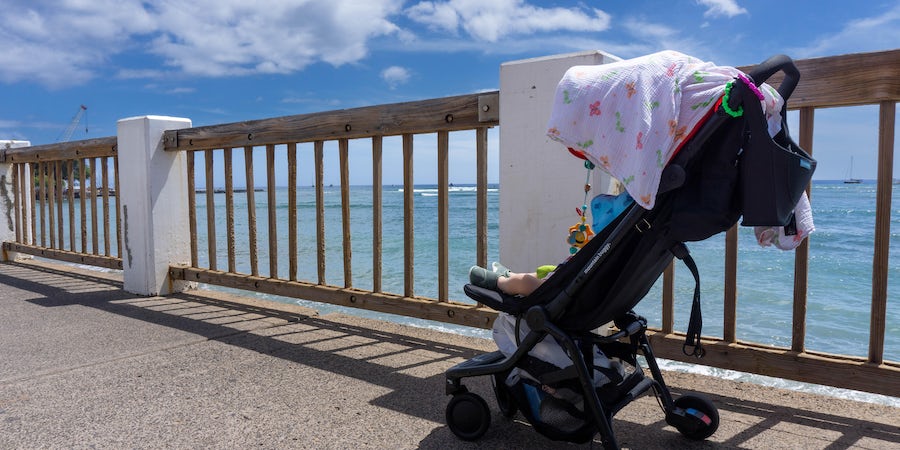 Cruising with an infant presents its own challenges (Photo: Aaron Saunders)

A Dad's First Time Cruising With an Infant: 8 Top Tips

When the opportunity arose for a family cruise to Hawaii aboard Norwegian Cruise Line's Pride of America, the choice to bring along our infant daughter was an easy one: why not escape the dreary winter weather and go to one of the most beautiful destinations in the world, from the comfort and convenience of a cruise ship?

Cruising with an infant presents challenges. You'll need to pack more -- lots more -- until you look like a tropical Ernest Shackleton in a Hawaiian shirt trudging through the airport, looking for base camp. Everything will take longer, from check-in to simply getting organized. And, as we discovered, the onus is on you -- the parents -- to ensure things go smoothly, from picking the right ship and cabin to figuring out nap times and sleep schedules.

Our first-ever family trip and first-ever cruise with our daughter (who is now a Latitudes Member with Norwegian Cruise Line at 11 months of age) was a success. But we learned a lot along the way about what it's like to travel with an infant, and just how different it is from solo or couples travel -- and how rewarding it still can be.

Diapers, baby wipes, clothing -- not to mention strollers, toys, Pack-N-Play's, diaper bags and the like -- all take up plenty of stateroom real estate. We thought we could do a week in a standard balcony cabin onboard Pride of America.

We were wrong. Though we handily unpacked the contents of our four (yes, four!) suitcases and managed to store it in the stateroom's ample drawers and closets, once we assembled the Pack-N-Play for our daughter to sleep in, it was clear we'd bitten off more than we could chew. Not only did the portable crib eat up all the available stateroom space, its bulk made it impossible for us to open our mini-fridge -- or balcony door.

We were lucky. Our ship was 50 percent full, and a couple trips down to an understanding and appreciative Hotel Manager netted us an empty connecting balcony stateroom next door, which gave us the space we needed for both us and our infant daughter.

My wife slept in one room with our daughter, and I slept in the other. A portable baby monitor allowed us to keep tabs on our daughter's naps from our balcony (the one we could actually access), or from the other stateroom. The extra space turned our cruise from a disaster into a success. But, as we realized, traveling with an infant forces you to rethink your stateroom choices.

So, think big if you plan on traveling with your infant or toddler. A suite -- with its increased space and lavish amenities -- is the clear choice here, but pricing can often be out of reach for many. Instead, look for connecting balcony or oceanview staterooms that are often a better deal and provide additional space, or larger rooms designated for families.

On some ships, even an inside cabin is a better choice if space is the deciding factor -- Holland America Line's Vista-class ships (Zuiderdam, Oosterdam, Westerdam, Noordam), for example, offer spacious inside staterooms that even boast their own large sitting area.

Don't forget, too, that suites and larger cabins typically offer bathtubs -- perfect for bathing your little one. We managed to squeeze an inflatable tub into our shower onboard Pride of America but will definitely search out cabins with fitted tubs for future sailings.

2. Independent Shore Excursions Are a Must

Even the process of going ashore changes when you bring the little ones along. Nap schedules, strollers and related baggage all mean a rethinking of how you spend your time ashore -- not to mention age restriction limits on many tours.

Bike-and-brew tours are off-limits, as are wine tastings, rigorous hikes, and even some city tours that have restrictions on mobility (the stroller) or minimum age requirements.

Out of the hundreds of shore excursions available to us, we found only a handful were suited to those with little children under the age of five -- and most of those were long, panoramic bus tours that we doubted our 11-month-old could get through without becoming fussy and distracting for other passengers.

Instead, we researched our own independent tour options in every port of call. While we didn't make it to adventurous locations like Volcanoes National Park, we did patronize local restaurants in every port of call, along with shops, public beaches, hotels and resorts, and city parks -- always a great choice for little ones.

To go further afar, we did something we'd never done ashore before. We rented a car.

Getting around with an infant is no picnic. You'll need to either bring your own car seat, or rent one. We went with a hybrid model, renting cars from National in both Honolulu and Kahului equipped with car seats, and finally just renting a car seat from baby service provider BabyQuip, which provided rental car seats we could use in Ubers and Taxis in both Nawiliwili and Honolulu post-cruise.

The car rental gave us freedom but proved to be problematic. The provided car seats (at $13 per day) were often of questionably quality and from different brands, meaning time was spent (or wasted) looking up how to secure the straps properly and fit the model into the car.

Renting the cars in Hawaii was far from straightforward, too. Even on arrival at Honolulu Airport, I had to ditch my wife and daughter and our eight individual bags and carryon's in order to make my way to the off-site Car Rental Center. This is not a trek you want to make with luggage!

In port in Kahului, I had to take a 10-minute taxi ride to Kahului International Airport, go to the Rental Car Center, and go through the formalities to pick up the car, which I'd reserved in advance. The lack of spaces to park the car overnight near the pier means I had to repeat this process two days in a row -- taxi to the airport, rent the car, fill out the paperwork, drive back to the pier, wait for my wife and daughter to come back, then explore.

Each evening, I dropped them off at the pier, drove back to the airport, returned the car, walked what felt like two miles to the taxi stand at the airport, took a cab back, and got back on the ship.

However, the car gave us the freedom to explore Lahaina and the glittery resort paradise of Wailea -- places we would have been unable to explore otherwise.

Eventually, a rental car shortage in Nawiliwili had us turning to BabyQuip to provide a car seat we could put in a rideshare service to go to the Kauai Plantation Railway for the day. Even reserving this the day before had us a car seat in-hand, pierside, by nine o'clock in the morning that someone dropped off -- and picked up later.

The service was so superb, we used it again in Honolulu, where a gentleman dropped an infant car seat off for us right at the Pier 2 Cruise Terminal and collected it the following day from Honolulu International Airport's Terminal 2 as we checked in for our return flight home.

4. Bring a Carrier for Tendering

Strollers and tenders don't mix. For tender ports, make sure you have a collapsible travel stroller that can be easily carried onboard a tender, along with a wearable baby carrier that can be strapped to an adult. Not only will it keep baby safer, but it will also allow mom or dad to keep both hands free in order to board the tender -- something that's absolutely critical, particularly in heavier seas where tendering conditions may not be ideal.

We tried lunch in Cagney's Steakhouse on embarkation day, a little perk Norwegian Cruise Line granted to us. The food and service were above-par, but the environment was so refined we felt our daughter's cries would be inappropriate, despite her good behaviour.

Instead, we found ourselves more comfortable dining at the casual Aloha Café on Deck 12, Pride of America's buffet offering. In the evenings, we dined at the equally-informal Cadillac Diner on Deck 6, where the smaller space and quieter atmosphere helped our daughter wind down in the evenings.

Staff were universally kind to our daughter, and didn't mind when she made a mess -- which was often. High chairs were plentiful, and we felt better knowing the floors in both rooms were simple tile, allowing them to be cleaned easily of any food that might have hit the deck.

Likewise, passengers treated our daughter like gold -- something that would likely not have happened if we'd waltzed into the ship's more formal dining spaces.

That doesn't mean you can't enjoy a meal -- it just means you might have to do it separately, unless your ship has babysitting services or you are travelling with family or friends that don't mind looking after your little one in the evening hours.

6. Wind Down With a Quiet Stroll on the Open Deck

We found walking back from dinner through the ship's public spaces got our daughter all riled up (she loves people and new places), so we started taking her on walks from the aft end of the ship to the forward end via the ship's outdoor promenade deck, where the sea air and ocean sounds calmed her down instead.

When weather was inclement, I pushed my daughter around the ship's miles of cabin corridors -- something she seemed to enjoy, and a trick that helped my wife and I get our daughter prepared for her nightly bath and bedtime stories each evening.

Unless you are traveling with extended family and friends, or your ship has evening babysitting services (many do not, though some do), you'll feel a little trapped having to stay in the cabin when your little one tucks in for the night.

My wife and I worked together to come up with a plan: she'd see the shows that interested her while I stayed in the cabin, then we'd switch, allowing myself to go out and her to stay in. It's a system that worked well for us, though it does require being comfortable doing things on your own.

I was. One night, I dined in the Skyline Main Dining Room by myself, while another night I took in the adult comedy show and enjoyed drinks in the bars around the ship. And while I missed my wife and daughter, it was nice to have some "adult" time during the day.

8. The Memories Are Worth It

Some travel sites simply say it's not worth traveling with your infant child because they won't remember it. You, however, will definitely remember the memories you made on your first trip abroad as a family.

While traveling (and cruising) with an infant is far from easy, it is still immensely rewarding. I was surprised how much I enjoyed watching my daughter interact with the crew and the passengers, and how she seemed to take the entire ship in, not to mention her first trip to a tropical destination.

Will she remember? No. Was it an easy trip? Absolutely not. But would I do it again? In a heartbeat.

The more you plan in advance, and the more you research, the easier it will be on all of you.