You may also like
Dismiss
Alaska on a Budget: Cheap and Free Things to Do in Port
5 Reasons to Love Windstar in Alaska
11 Best Whale Watching Cruise Shore Excursions
Whale Quest Juneau Whale-Watching Excursion Review
8 Exhilarating Shore Excursions
Best Cruise Ports for Wheelchair Users
What Is the Economic Impact of the Cruise Industry in the United States?
Inside Passage Towns Implore CDC To Reopen Cruises: Just Back From Alaska
Whale Watching and Other Natural Shore Excursions in the Mexican Riviera: Just Back From Majestic Princess
Tracy's King Crab Shack and Juneau's Red Dog Saloon Ready to Welcome Back First Full Alaska Cruise Season 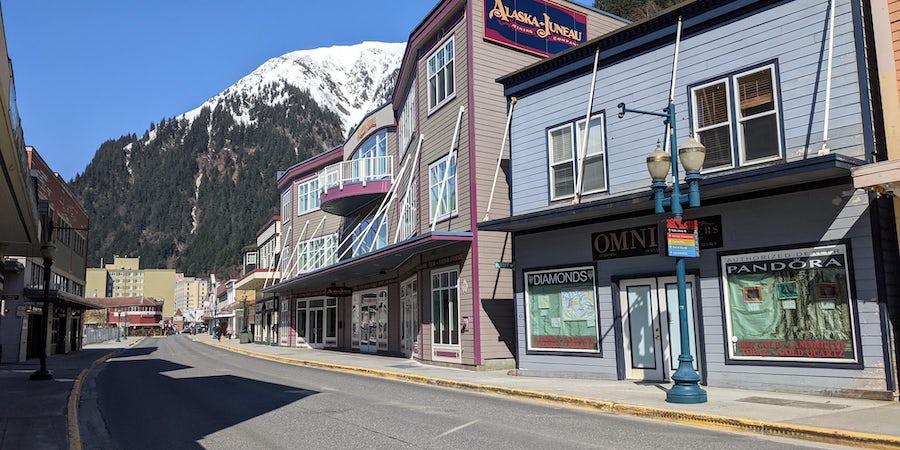 Just Back From Southeast Alaska: Excitement and Expectations for the First Full Cruise Season in 3 Years

Juneau, Alaska, is buzzing, but you wouldn't know it -- yet. Give it another few days. On April 25, Juneau will welcome Norwegian Bliss, officially kicking off the 2022 Southeast Alaska cruise season, the first full cruise season in three years.

Compared to previous, pre-pandemic seasons, preparation for the upcoming cruise season will look a lot different to both businesses and cruisers. Cruises to Alaska were completely halted in 2020, and a fractional season in 2021 brought in just 10% of the usual cruise passenger volume.

Cruise Critic recently spent a week on the ground in Juneau and Ketchikan, getting an in-person peek at how these two popular Inside Passage communities have been preparing -- mentally and operationally--for the highly anticipated, and much needed, full return to cruising in the region.

Here are our key takeaways on the vibe, challenges, hope and excitement surrounding Alaska's 2022 cruise season -- and how it will impact the cruiser experience.

Alaska may be in the thick of preparing for its full return to cruising, but the excitement and appreciation are laced with trepidation. The state has been burned before, in 2020, and again last year, when the possible 2021 cruise season was cut short by Transportation Canada's decision to extend its ban on cruise ships in Canadian waters.

Inside the presentation room at the Tongass Historical Museum, Ketchikan City mayor Dave Kiffer describes the overall vibe as "cautiously optimistic" -- a sentiment that was echoed by everyone we spoke to during our visit.

"I don't think the vibe for anyone is, 'Oh boy, we're out of this now'," Kiffer says, adding that the general consensus is that it will take about three to five years before the industry gets back to normal.

Serene Hutchinson, manager of Juneau Tours and Whale Watch shares her version of the long, back and forth dance of having one foot on the gas pedal and the other on the brake that many of the surviving businesses that rely on cruise tourism have been forced to endure for the last two years. "It was nerve-wracking," she says.

After being forced to issue refunds for the rash of cancellations from the 2020 cruise shutdown, Juneau Tours and Whale Watch was eager to open for the 2021 cruise season, even if it was short and small. Hutchinson says. In hindsight, the restart and operation costs ended up being more effort than it was worth for such a small season.

Then, right as bookings started picking back up again in 2021 (for the 2022 season), the CDC told everyone to avoid cruises with a travel warning that has since been dropped. Hutchinson says this time the company didn't receive a flood of cancellations, but it also wasn't receiving any new bookings. "It took me a really long time to start getting excited and hopeful."

From inside the Clan House within the Saxman Native Village just outside of Ketchikan, YushGwan, Tlingit artist of the Cape Fox people (you may also know him as Kelly White, the Tlingit artist who had a live totem carving residency aboard Princess ships), tells us, "There's some anxiety, but everyone's more on the positive side. Everyone's just really happy this season is coming back."

Profits, Losses and Behind-the-Scenes Costs of Preparing for the 2022 Cruise Season

When the CDC announced the No Sail Order on March 14, 2020, Alaska had fewer than 20 confirmed cases of COVID-19. Overnight, Juneau and Ketchikan's main source of income had been stolen by a virus that had barely even crossed their borders.

On April 9, 2021, Alaska reported that the absence of cruise ships in 2020 had caused a tax revenue loss of $33.7 million for Juneau and 27.2 million for Ketchikan city and borough. Skagway, another major Inside Passage port city, was hit with losses that exceeded 100% of its operating budget.

A cruiser favorite, the Red Dog Saloon in Juneau, estimates that its revenue was down about 92% in 2020 from the previous year, and that in 2021 they were still down about 80% from 2019 sales numbers.

General Manager Eric Forst says everyone at Red Dog is pretty optimistic when it comes to the 2022 season. "I think it'll start off a bit slow, but I think by June it's gonna ramp up pretty fast, and we'll have enough of a season that we'll be okay."

In preparing for the return to cruising, cities are ramping up their infrastructure, hiring extra hands, more security, extra medical aid. Businesses are dusting off or replacing old equipment that hasn't been used in three years, applying for licenses, hiring seasonal staff (more on that later), trying to secure housing for said staff, doing test runs and trainings. All things that cost money, upfront.

We heard repeatedly from people that trying to restart after three years of relative inactivity has been more labor and cost intensive than usual.

Many Businesses Are Operating Understaffed Or With Newbies -- For Now

One of the big takeaways from the pandemic for Forst was having higher appreciation for the value of his employees. Finding employees is one of the biggest, immediate challenges facing Alaskan tourism businesses and tour operators in 2022.

Serene Hutchinson told Cruise Critic that "the most dramatic thing" they've dealt with so far during their restart preparations has been the reduction in returning employees, dropping from around 75% to just 15%, so far.

A big part of the problem is that tourism jobs in Alaska are mostly seasonal, and many of the seasonal staff companies have relied on every year are now working other, more traditional jobs -- jobs they were forced to turn to when the pandemic shut down travel and cruise tourism.

Ben Rubenstein from the Travel Juneau PR team knows firsthand the desperation that these companies are facing. He used to be a career guide, a repeat guide who works different tourism seasons in different locations, every year. In fact, Rubenstein moved to Juneau in 2019, his fifth year as a guide, to lead ice climbing tours at Mendenhall Glacier, one of the top tourist sites in Juneau.

When COVID-19 hit, he applied for his current position, a salaried, stable position with benefits, and he's not looking back -- even though he has been contacted by a few companies.

"Companies that wouldn't even give me the time of day before are now offering me jobs without even an interview," Rubenstein says. The crunch, he says, has also forced employers to be more competitive with their pay and benefits, and will likely give a lot of greener guides the chance to cut their teeth in what was once a highly competitive job market -- a few small silver linings for workers.

Many businesses we talked to have faith that once the season proves itself in numbers and returns -- and staying power -- some of these career seasonal employees will be enticed to come back to work. Until then, cruisers should expect to encounter a fair number of workers who may be new to the industry, or Alaska itself.

In addition to a handful of new Alaska experiences on offer in 2022, cruisers should expect a slightly different experience than they may have had in pre-pandemic years, whether that means booking your shore excursions (very) early or doling out an extra dose of patience.

As the first full cruise season since 2019, Alaska's 2022 cruise season is primed to be its biggest yet -- with more cruise ships, more sailings, more passengers and a longer season (Norwegian is offering sailings through mid-October). Numbers are expected to top 1.4 million, making it a record year.

If there's a shore excursion you're dying to do, be sure to book it well in advance to make sure you get a spot. Keep in mind that the current staffing shortages and business restarts may mean there are fewer tour options available on a given day from a given company, and there will likely be more people vying for a spot.

Handling tens of thousands of incoming cruise passengers a day is a learned skill, one that Southeast Alaskan tour operators and businesses are eager to flex once again. However, unused skills can get rusty, even for the most seasoned of veterans.

Remember, just as the rest of us relearning how to work in offices or returning to the daily activities that were once second nature, the tour operators, guides and local businesses you encounter on your Alaskan cruise in 2022 will also be exercising muscles -- and using equipment -- that have been out of practice for a couple of years.

We've already mentioned a few positives in the cruise industry that have come out of the pandemic, but there are more stories of light to come out of this dark period.

For some their pandemic pivots and side hustles have become permanent offerings. Pre-pandemic, Alaska Luxury Tours specialized in high-end, exclusive whale watching and land tours for cruise ship passengers. During the cruise ship ban, they switched their focus and began serving clients coming in on private super yachts. Going forward, they'll continue to offer services to both. "So now we cater to billionaires and Carnival Cruise Line, a little bit of everything," a rep tells us.

Juneau mayor Beth Weldon says although Juneau was able to survive off their reserves during much of the pandemic, the closures and lockdowns were a "huge, painful expense". However, one of the silver linings is that the community has become very aware of how important the tourism industry and cruise industry is to Juneau, and some of the anti-cruise sentiment has lessened. "Having businesses sheltered has made Juneau-ites very aware that it affects them in their day-to-day life."

On the flip side, over in Ketchikan, Mayor Kiffer says that cruiser sentiment was less affected by the pandemic. Like Juneau, Ketchikan city was also able to operate on financial stores, but also welcomed "a fair amount" of independent tourists which helped to keep its lodges mostly full and some tour operators, like fishing charters, busy in the interim. For Kiffer, the biggest positive to come out of the pandemic is that cruise lines are now more proactive about working with the communities they visit.

"Prior to COVID, and the whole crash of this industry, I don't think the relationships between the towns and the cruise lines were necessarily in a good place," he says. "And I think in the past years, the experience was starting to suffer." Kiffer says "the break, the pause" really started a conversation between cruise lines and community officials in Juneau, Ketchikan and Skagway about how they can work together to create a sustainable, enjoyable, beneficial experience for cruisers and the communities they visit.

One overriding message that everyone we spoke with wants to send to cruisers who are heading up to Alaska this year:

"Thanks for coming. We can't wait to welcome you back!"