You may also like
Dismiss
7 Reasons to Cruise Celebrity Flora in the Galapagos
All About Adventures by Disney Family River Cruises
The Most Expensive Hotels Near Southampton for a Pre-Cruise Stay
The Choir of Man on NCL
9 Reasons to Get Excited About P&O Cruises' Iona
Best Cruise Ports for Wheelchair Users
Pictures From the Ultimate Disco Cruise
Will I Have to 'Social Distance' on My Next Cruise?
Just Back from the Arctic with Hurtigruten: Following in the Footsteps of Susan Calman
Ambassador Cruise Line's New Ship Sets Sail: Live From Ambience in the Norwegian Fjords 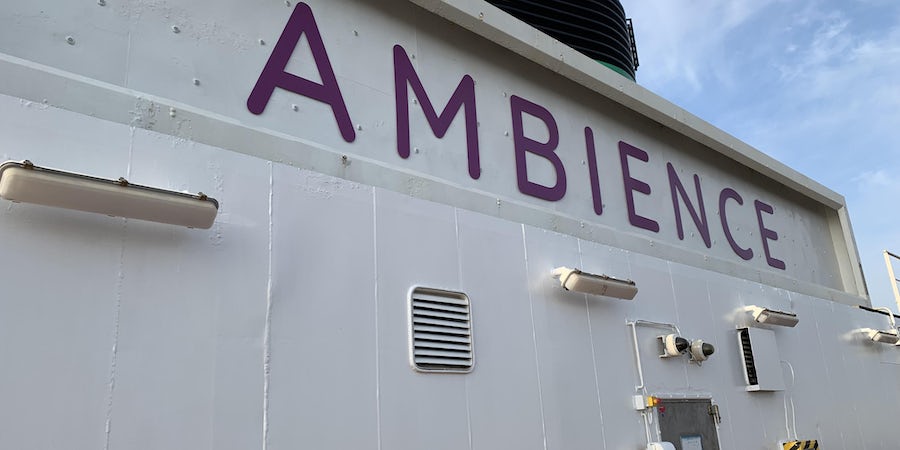 Ambience's launch was delayed for two weeks due to "supply issues" (predominantly fuel), which CEO Christian Verhoung apologised for at the ceremony.

We were onboard Ambience with assorted trade partners and 170 specially invited passengers to attend the naming ceremony and a gala dinner, and to get a sneak preview of the ship, ahead of its maiden voyage that embarked on April 20, 2022.

Here are our first impressions of Ambience:

First up, a bit of history -- Ambience is not a new ship. The 31-year old vessel started life as Regal Princess in 1991. It went through various incarnations before getting to this point before joining Cruise & Maritime Voyages as Amy Johnson,

However, the former Regal Princess never sailed as Amy Johnson, following CMV's collapse in the midst of the pandemic, with the company saddled by debt and the resulting shutdown of the industry.

Ambassador Cruise Line (which is privately owned buy Njord Partners LLP, London) was formed soon after, buying the ship from the administrators and subsequently refurbishing it.

The big difference between CMV and Ambassador, as CEO Christian Verhoung pointed out, is that unlike CMV, Ambassador carries no debt:

"We are a cruise line that has all our customer funds in an independently-managed trust account," he said at the ceremony. "And we are not using any of your money to fund our operations."

Verhoung added that Ambassador aims to fill the large gap in the British cruise market left in the wake of CMV's collapse -- budget, no-fly cruises, geared at Brits over-50 years of age.

And as far as we can gauge in the space of a few hours onboard, they have succeeded -- with a few caveats.

The Quality and Variety of Food on Ambience Is High

For a small ship (just 1,400 passengers), Ambience has a wide selection of places to eat or just grab a bite.

There are a number of speciality restaurants, including a Chef's Table, an Indian restaurant, Saffron; and an Italian, Sea & Grass (though these were not open during our short stay).

We ate in the main dining room, Buckingham Restaurant; and the buffet, Borough Market, and were impressed by both.

Admittedly, it was a multi-course Gala Dinner, but we have attended many of those events on other lines and the food was often not great.

Borough Market is well-designed, with indoor and outdoor spaces, plenty of different sized tables and counter seating, and with a chunk taken out the back given over to Saffron.

The décor is fun and funky, without trying too hard, giving it a really fresh and modern feel.

Every section offered a different cuisine -- fish and chips, Asian, Indian, salads, breads, desserts -- and the quality was high all-round (surveying other guests).

Same story with Buckingham, where we ate mushroom soup, a delicious cheese souffle, smoked salmon and an outstanding herb-crusted lamb chops (my companions had surf and turf and said the same).

For a ship of this category -- i.e. budget -- the quality of the public spaces rival that of many luxury ships we have been on.

Clearly the line has spent a considerable sum on decor in the restaurants and bars -- however, that cash may have run out when it came to the cabins (see below).

In particular, The Botanical Bar, Raffles and The Observatory, stood out; with The Botanical Bar, done out in soft greens and flower-pattern seating, with a beautiful wall painting at one end, really shined, and made a great spot for a pre- or post-dinner cocktail.

The multi-use Observatory, a perfect spot to while away the hours on a sea day, or dance the night away in the evening, was equally impressive, though in a different way: modern, stylish and futuristic.

We also love the classic feel of certain public spaces, such as the wide corridors complete with balustrades, the expansive teak-deck promenade, the acres of top deck space and the absurdly deep (1.8 metres) pool (they don't make 'em like that anymore!).

Service Aboard Ambience Was Outstanding

All lines make much of their crew's high service standards (it's almost a given on cruise ships), but those levels can often slip with the pressure on the first day.

Not so on Ambience, where we were met with smiles (under the masks), patience (when trying to find out where the sauces were), and knowledge (when discussing the wine on offer).

We were particularly impressed by the wine and food waiters serving under pressure (and heat) during the ceremony -- all did so with great grace and patience.

Ambiance caters to its British clientele with ease. Kettles and Tetley tea bags and actual milk (not powdered) in cabins -- tick.

Fish 'n' chips, roasts and curries on offer in the buffet -- tick.

No kids onboard -- tick.

No-fly cruises for Brits to a wide range of destinations (31 cruises to 36 countries this season) -- tick.

What we noticed, too, is that although CMV offered all this, the line did so in a very budget way -- the ships were much older and many had not been refurbished at all.

It's clear that Ambassador has made an effort to give this ship a premium feel, and that's to be lauded.

Ambience Is Not Yet Ready For Service

Despite what you'd expect to be a decent amount of time to get the ship ready for service -- it's not.

Much of the top deck spaces, including the main pool area, was still being redone as we wandered around, with timber, fittings, wires, and more littering many of the open spaces.

In addition, a room at the aft, which was clearly once a kids club and has been rebranded as an "Active Studio", was still being fitted out.

We've seen this on many new builds, and it's not unusual for a ship to be not quite ready for service on a shake down or pre-inaugural cruise, but we were shocked by how much needs to be done still aboard Ambience as it prepares to embark on its maiden voyage.

A spokesperson for the line said: "We can confirm that we did suffer some Custom delays with goods reaching the ship after we'd arrived in London Tilbury.

"I'm pleased to say that the outstanding works have been completed overnight and the pools will be filled once we leave the Thames, ready to welcome paying guests who will join later today."

Cabins Look and Feel Old -- But Are a Good Size

In contrast to the public spaces, the money either ran out or cabins were not deemed a priority for a refurbishment.

Admittedly, it's hard to change fixed furniture such as wall-mounted desks, wardrobes, and bathrooms without a major overhaul, but there is no excuse for loose fittings and fixtures (pictured above).

Air conditioning systems in cabins did not work or were very loud and rattly; and we did hope that clingy shower curtains had been consigned to the past.

However, the cabins are spacious and beds are comfy (we slept very well), and it was a joy to have a walk-in wardrobe.

Ambience looks, feels and is a significant step up from CMV's ships, and judging by our few hours on board, will feel that gap left in the budget market.

It's clear Ambassador has spent a lot of time, money and effort thinking about how best to enter -- and, perhaps even more importantly, reassure -- guests and trade partners that they are a safe and reliable company.

There are a few kinks to iron out, and many of those will no doubt be addressed in the coming days and weeks, but overall, we feel Ambassador is a great addition to the British cruise market.