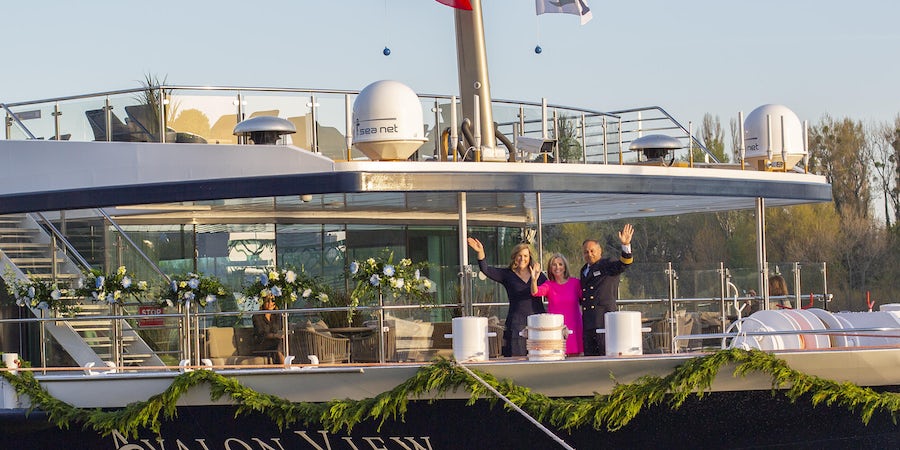 What it’s Like to Take a River Cruise on the Lower Danube Right Now: Just Back From Avalon View

Every ship christening is a cause for celebration but the debut of Avalon View on the Danube in Slovakia on April 12 took the ceremonial send-off to new heights.

The mood? Buoyant, bubbly, blissful. And no wonder – what a backstory. Most of us, including godmother Meredith Viera, had been invited to View’s ship-naming ceremony in April 2020. Then COVID-19 happened – and the christening didn’t. Like many of the guests onboard, the 166-passenger ship has been in a travel lockdown for two years.

That moment is not without its challenges. Avalon Waterways had expected 2022 to be a year of significant recovery as travelers returned to its 14 ships on Europe’s waterways for the April-December sailing season. But the Omicron variant triggered a slowdown in bookings in January and February. On top of that, the war in Ukraine has caused some people to rethink their Danube itineraries. Avalon’s Danube bookings are down by 10 percent.

Yet travel agents I talked to onboard reported a decided uptick in European cruise bookings over the past two weeks. As Megan Wollak, a Travel Leaders Network executive in Minneapolis, framed it: “There’s this renewed appreciation for travel. We see it in the numbers. We see it in people’s faces. We’re finally at a point where we’ve turned a corner.”

Should You Cruise the Danube Right Now?

First continuing COVID-19 concerns, and now war in a nearby country. Both Slovakia and Hungary, destinations on our 4-night christening cruise from Vienna to Budapest, share borders with western Ukraine. Is this really the time to travel on a Danube itinerary, which is Avalon View’s terrain? In my mind, yes. Here’s why.

To be sure, the war has had an undeniable impact on tourism in Europe. The Global Rescue Traveler Sentiment and Safety Survey in early April asked respondents: Has the war caused you to cancel or postpone a trip to Europe? Forty percent said they had canceled or postponed and an equal percentage said they had not, with the balance reporting no plans to travel to the region at all.

I think it’s a perception versus reality thing. The perception is you look at a map and realize how close Ukraine is to the Danube, making some people understandably nervous. I get that. My own father asked me to reconsider my travel plans. But the reality is there’s been no impact at all on Avalon’s day-to-day operations. As Pam Hoffee, the company’s president, put it: "There are no travel warnings about coming to the Danube. There is no reason not to come. In fact, there’s a big reason to come."

As for COVID-19, Avalon has had plenty of practice at creating a safe space for guests. For starters, the company recommends getting tested in advance of a cruise, and passengers must show their all-important vaccination cards when they first board. Crew, tour guides and motor coach drivers are fully vaccinated. The only time we had to mask up on Avalon View was while collecting food at a buffet or when riding in the coach to and from shore excursions.

Regulations around COVID-19 remain fluid. At the moment, a negative test result is still required of all air passengers entering the U.S. That’s why, on the eve of my departure, the ship’s Adventure Host showed up at my suite for a swab. The test itself is an Avalon perk right up there with free Wi-Fi and complimentary wine at lunch and dinner. And its value cannot be overstated: Two men were denied boarding passes on my flight home because their COVID documentation did not pass muster. That’s not going to happen under Avalon’s watch.

Discoveries Along the Danube

Our 178-mile cruise was brief – but loaded with experiences that will fill me up for weeks to come. How else to explain the  45-minute carriage ride through Vienna drawn by two white speckled horses named Peter and Paul? Or, in the Slovakian capital of Bratislava, a hike through a terraced vineyard punctuated by well-timed pauses for tasting local wines?

I won’t soon forget exploring in Esztergom the largest Roman Catholic church in Hungary – and the fabulous wine tasting afterward in an old cellar underneath it that hundreds of years ago housed the archbishop’s stash. And sailing into Budapest at night, with Parliament illuminated, well, there’s nothing quite like it.

Avalon’s itineraries include classic, discovery and active excursions, as many as four a day. "Classic" involves must-see sights, "discovery" explores activities such as cooking and painting classes, and "active" steps it up with options like e-biking, hiking, and kayaking.

Avalon View’s itinerary this year will focus on the Lower Danube: Germany, Austria, Slovakia and Hungary with cruises ranging from three to 21 nights. Some include one- or two-night hotel stays in cities like Vienna, Budapest and Munich.

The ship in 2023 will add the Upper Danube with itineraries in Croatia, Serbia, Bulgaria and Romania. A few cruises on the Rhine and Main rivers are also in the works.

Onboard Experience Remains the Same

I last cruised with Avalon on the Rhone in France last fall and, sailing on Avalon View, I was reminded of what this river cruise line does especially well.

First, the cabins. Back in 2009, outdoor balconies on river ships were becoming a thing. A big thing. Avalon’s take on it: Why? Instead of surrendering three feet of precious real estate to a balcony, Avalon created an interior open-air balcony – essentially a floor-to-ceiling window that opens 11 feet wide. Best yet, the bed faces the window and the ever-changing scenery.  As Avalon describes it: "a view with a room."

It's an innovation that allows for Avalon’s signature 200-square-foot Panorama suite to be larger than the industry average by 50 square feet. In addition to its 65 Panorama suites, Avalon View has two Royal suites, measuring 300 square feet, and, on the bottom deck, there are 16 staterooms, 172 square feet, with windows that don’t open.

Other touches in the cabins that I admire: Different colored towels so that suite mates don’t get theirs mixed up, under cabinet lighting in the marble bathroom that serves as a nightlight, and four choices of mattress firmness. New to the Avalon fleet this year: a limited room service menu at dinner.

The ship also has terrific public spaces: a top deck with a hot tub and chaise lounges, a cozy Club Lounge, and the Panorama Lounge, which is where you can get cocktails, attend port talks and enjoy local musicians at night.

With its inclusion of shorter itineraries and physically active shore excursions, Avalon is clearly targeting a younger audience. Next month, the firm hopes to amplify its messaging with a "Cruise Elevated" branding campaign, featuring Outlander star Graham McTavish, on streaming platforms like Hulu, YouTube TV and Peacock.

The best feeling is just being back on the rivers with a full season.

"Getting back in business, yeah, that’s a very good feeling,"  Capt. Ambrose Manolache said at the christening. "We’ve been waiting for this moment."