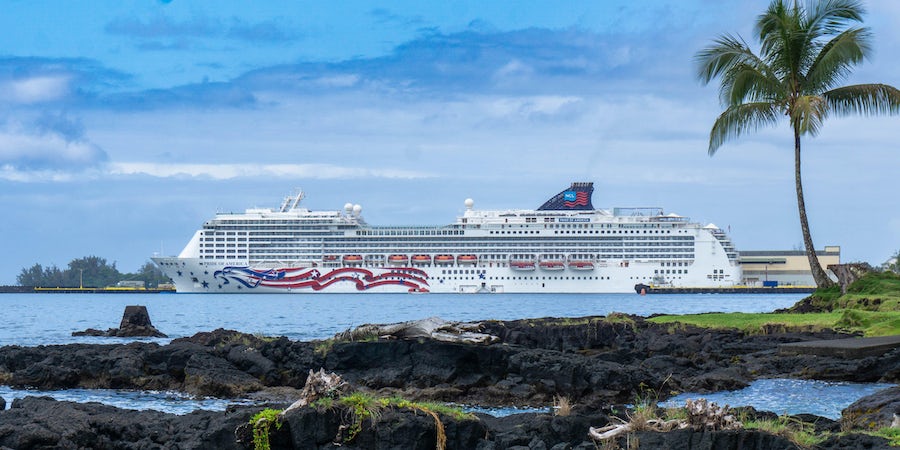 Pride of America alongside in Hilo, Hawaii on April 12, 2022 (Photo: Aaron Saunders)

Just Back from A Hawaii Cruise On Norwegian Cruise Line's Pride of America: Hits and Misses

Built in 2005, Pride of America is the only large-scale cruise ship in the world that can legally sail Hawaii cruises roundtrip from Honolulu, thanks to some creative wrangling. When the pandemic hit, it was widely assumed this special status would help Pride of America restart operations first. After all, a U.S.-flagged passenger ship employing a predominantly American compliment of officers and crew sailing to entirely American ports of call would be uniquely suited to comply with COVID-19 restrictions implemented by the U.S. Centers for Disease Control and Prevention.

But it was not to be. Two long years passed before Pride of America set out on its first return voyage on April 9, 2022 -- some eight months after the first NCL vessel restarted service last summer.

Setting sail on Pride of America's first voyage back, Cruise Critic found a ship that has matured considerably since it first entered service -- one that can hold its own against the inherent charms of Hawaii itself. Here are our hits and misses.

Hits from Onboard Pride of America

Make no mistake about it, this is not the Pride of America of 2005. An extensive drydock at the Vigor shipyards in Portland, Oregon in 2020 during the pandemic (coupled with an extensive refit in 2016 that added new suites and got rid of the bizarre amphitheatre that used to exist on the ship's upper deck) has left Pride of America looking as elegant and classy as NCL's newest vessels. It's a win-win for Norwegian, and we can't wait to set sail again on this one-of-a-kind ship.

Kid-Friendly Amenities Make the Ship Perfect for a Family Vacation

Pride of America is perfectly suited for families wanting to see Hawaii together, and on our cruise we saw infants, toddlers, kids, tweens and teens setting out for the Hawaiian Islands. A huge Shuffles Card Room proved popular with families, and board games are available there and in the adjacent S.S. America Library. Couple that with a dedicated Kid's Cinema, the Splash Academy youth clubs, and activities geared just for kids, and you've got the recipe for a great family vacation -- even if Pride of America lacks some of the newer bells-and-whistles like waterslides and splash parks.

The Crew Are Enthusiastic

While many are still learning the ropes (and some are on their first-ever voyage), we found the predominantly American crew aboard Pride of America to be friendly and hardworking. American crewmembers are supplemented by a smattering of international crew, who set the tone for professionalism and dedication to service. And what they may lack in polish (right now), they make up for in enthusiasm. It's hard to fault a crew who are trying their level best to ensure guests have a great vacation.

The Roundtrip Honolulu Itinerary is a Winner

This has been a winner since Day One for Norwegian, and Pride of America's weeklong itinerary -- one that includes over 100 hours on-shore across four separate ports of call -- is the only immersive big-ship cruise itinerary in Hawaii, and the only big-ship cruise to depart roundtrip Honolulu.

Misses from Pride of America

While this should improve over the coming weeks, Pride of America is, as of right now, understaffed in certain areas. Ordering a drink at Pink's Champagne Bar took 22 minutes on one busy evening after departure from Hilo, compared with just 45 seconds in the Napa Wine Bar on the same evening. To be fair to Pink's: you'll have better results going up to the bar and ordering, and the staff are working their hardest to fulfill all drink orders as rapidly as possible. We expect staffing issues should begin to sort themselves out over the next few sailings.

Make no mistake -- though some staff may be learning, and some may be juggling multiple roles onboard, this is not a repeat of the service issues that plagued Norwegian's Hawaiian operations back in 2004-2005. Staff onboard have been universally friendly, gracious, and willing to please.

With only two specialty dining venues currently open, reservations fill up fast at Cagney's Steakhouse and the immensely-popular Le Bistro, which may just be the most gorgeous dining venue of any Norwegian Cruise Line vessel in its incarnation as Jefferson's Bistro here aboard Pride of America. And that leads to unhappy customers. If specialty dining is your thing, confirm your reservations the second you board -- and don't be afraid to ask if there are any last-minute cancellations.

There's Often a Lack of Information on Port Facilities

We found it difficult to determine what was available at each port of call, particularly in industrial ports, for those not embarking on ship-sponsored shore excursions. A fair amount of Google searching netted us the appropriate answers, but we'd like to see the Shore Excursion team have a bit more knowledge of port facilities and availability of things like taxi's, Uber's and rental cars.

Let's be fair and lay part of this blame squarely on the individual ports, too, which generally offer no outside information, maps, or shuttles that would be of use to the average passenger -- and which have, for whatever reason, the unhappiest security guards we've encountered in a long while. Expect to be scolded for nearly everything you might do pierside -- including calling an Uber or Lyft. Only taxis are allowed within the dock gates; a long hike down a service road awaits -- in every port -- to board your rideshare service.

Bottom Line: Pride of America Is a Meaningful Part of Hawaii Tourism

The significance of Norwegian Cruise Line's return to Hawaii cannot be understated. Since 2005, Pride of America has been a staple of these Hawaiian Islands, arriving with punctuality into its weekly ports of call, much like the Matson Line ships that used to sail weekly from the U.S. Mainland to Hawaii and points afar and which are still a huge part of local folklore here.

Seeing Pride of America return for the first time in two years represents a return to normalcy for people in port. For those who rely on the tourist trade brought by the cruise ships, it's a return to financial stability.

Our Lyft driver in Lihue spoke of regretting sleeping in on Thursday morning; he wasn't aware Pride of America was coming back this week. Shopkeepers at a local artisan store in Kilauea-Kona told us the ship played an important role in tourism in Hawaii, which is finally starting to expand beyond domestic visitors once again.

Onboard, the crew of Pride of America have worked diligently to bring this ship back into service. The ship sparkles thanks to its extensive refit, and what its crew lacks in polish it makes up for in raw determination. I've watched bartenders run off their feet all week, mixing drinks as fast as their hands will allow. I've seen gift shop workers unpacking box after box of merchandise and doing it with a smile. I've seen crewmembers teaching others how to make cappuccinos, and what the difference is between a latte and a cappuccino and a flat white.

All are grateful to be here, to have passengers onboard once again - and so are most passengers I spoke with onboard. Sure, some are miffed about shore excursions and specialty restaurants being booked up, and that, too, is understandable. But as good as it is, dinner at Le Bistro should not be your reason for booking a cruise to Hawaii; you can do that onboard Norwegian Sky on a cruise to the Bahamas for a fraction of the price.

It may be early days as far as the Hawaiian cruise restart goes, but Norwegian and the crew aboard Pride of America have turned the ship into a destination in its own right. I found myself wishing for more days at sea to enjoy the comforts of the ship and that Pride of America itself was so quiet, well-maintained, and well-run.

Pride of America is back.