You may also like
Dismiss
AmaWaterways vs. Viking River Cruises
Aquavit Terrace on Viking River Cruises
Holland America's Oprah Cruise 2019: 5 Things That Wowed Us
Cruise Vision 2020: The Future of Cruising in Australia and New Zealand
All Aboard! Cruising the Baltic Where Small and Friendly is the Way To Go.
Why Scenic Eclipse Is the Luxury Cruise Ship for You
New Luxury and Expedition Ships Coming in 2020
5 Things That Have Us Excited About Viking Octantis, Viking's New Cruise Ship
Viking Great Lakes Cruises Offer Fascinating Glimpse of Regional Nature, Wildlife 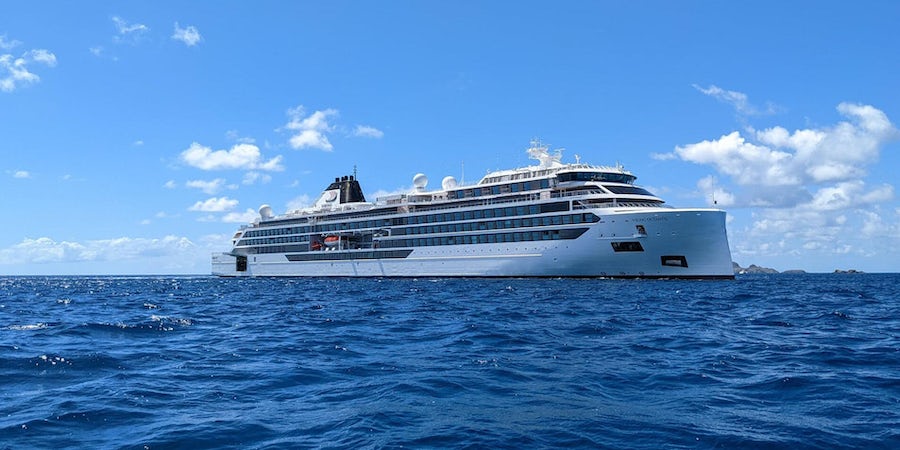 Live from Viking Octantis: Trying Out Viking Expeditions on its Newest Ship -- Including a Submarine Ride

When Viking Octantis debuted in early 2022, it represented a journey into a new area for a cruise line that already was wildly successful with its river and small ocean ships. The adventure cruise arena is riding a surge — with high interest from guests and more companies than ever introducing expedition ships, from basic to ultraluxury.

The timing just feels right for Viking to stretch into expeditions.

Viking Octantis finished its inaugural Antarctica season in April, and it relocated for a one-off sailing in the Caribbean before it heads north for a highly anticipated Great Lakes cruise season. Cruise Critic is onboard for this unique sailing to see this brand-new ship and check out the leap into Viking expeditions.

Viking Expeditions are Full of Fun, Highlighted by the Ship's Submarine

This Caribbean voyage, which starts in Barbados and finishes in New York City, is an unusual sailing that essentially is a repositioning cruise, as Viking Octantis continues its move from Antarctica to the Great Lakes. That means it's not necessarily a true expedition cruise; many of the activities we're enjoying feel more "traditional cruise ship" than adventure. But one of the activities we were able to try out was the submersible.

Viking Octantis carries two yellow submarines onboard, named John and Paul. (Look for George and Ringo to debut on sister ship Viking Polaris when it starts sailing in August.) While subs are de rigueur on expedition ships these days, Viking sets itself apart by including rides in the cost of the cruise fare; you'll pay hundreds extra on every other cruise line for this unique offering.

Our journey came off the shores of St. Barts, and while we didn't see much in the way of colorful fish or coral reefs (save three curious barracudas), this thrilling journey was far more important to me than the destination. I've never experienced seeing the underwater world this way, and being in a bubble 25 meters below the surface was something special. Our group of five were positively giddy the entire dive, which lasted roughly 30 minutes.

The night before our scheduled ride, we attended a mandatory briefing, in which we were told what to expect. (It also came with a weigh-in for determining the ideal loads and balance in the sub -- surprise!) The emcee and pilots warned people to expect it to be a physical challenge, as passengers transfer from a bouncing Zodiac onto a bouncing sub floating on the choppy waves, then climb down a ladder and crouch really low to duck-walk to seats in the compact submersible.

And they were right: It was a physical challenge for some, though we were impressed with the attention paid to making sure guests could safely make the transfer. This also isn't a great option for anyone who is the least bit claustrophobic.

If your heart is set on trying out the sub, take note that a number of factors come into play in making it happen, most notably the weather. At our briefing, we were told guest safety is always the highest priority, so if waves and swells were too rough, the line wouldn't hesitate to cancel. This played out just after we finished our dive; we arrived back to the ship to learn they had pulled the subs for the rest of the day because of weather. Guests were rescheduled for the next day, but all those dives ended up being canceled as well.

Also, Viking is at the whim of local governments. If a jurisdiction says no to a sub, then that's that. Subs like this aren't permitted in the U.S. or its territories, so for Great Lakes sailings, expect your dives to come in Canadian waters.

Your best bet is to book an early sub journey -- early in the day and early in your cruise. That way, if it is canceled, you have more opportunity to reschedule.

What you see is fully dependent on where you're sailing. In Antarctica, it was about the ice and seeing glaciers underwater, though reports of a "giant jellyfish" were still running rampant on our Caribbean cruise. In the Great Lakes, we're told to expect to see fish, including invasive species, something that has become a real issue in the region.

For Viking Fans, Viking Octantis is Both Familiar and New

If you've sailed one of the Viking Oceans cruise ships, and many passengers on our sailing had, the ship feels familiar. Venue names are the same, the decor is modern Scandinavian, cabins have the same relative design, menus have many of the same options and the ship flow is mostly the same. Even the spa and fitness center feel familiar, not a bad thing, as Viking wins our Cruise Critic Editors' Pick for Best Cruise Ship Spa year after year.

But the new spaces and quirky-cool changes make the ship feel new and exciting, too. Most notably, The Hangar is the hub of the ship's expedition activities. Here, you'll find John and Paul, along with 16 kayaks, 17 Zodiac inflatable boats, a dive boat and two special operations boats (they call them SOBs).

The Hangar sets Viking apart, and ultimately, could be the differentiator that makes adventure cruising more accessible to older passengers or those with mobility concerns. The heart of this are the SOBs, which allow guests to board inside the ship; the SOBs are then rolled gently down a track off the back of the ship and into the ocean. This eliminates the need to embark and disembark Zodiacs, which can be a difficult process no matter your age or physical abilities. The SOBs allow all guests to enjoy a destination via scenic cruises offered on these slick boats.

Additionally, the ship's kayaks are designed to allow guests to use pedal -- rather than paddle -- power, thanks to their unique foot drives. (We were told in Antarctica, though, where rash ice is literally everywhere, the foot-powered option didn't work as well, in part because they have a deep draft, so a switch was made to allow people to use paddles.) Expect the kayaks to be a big part of the Great Lakes experience, though.

Get Your Science Geek On in The Lab

Another space of note is The Lab, which is as much about the experience as it is about the space. Viking has partnered with the Norwegian Institute for Water Research, and it's continuously doing research on Viking Octantis. That means, water samples are being collected all the time from Octantis, and data is continuously being reported to the organization.

Viking Octantis is focusing on microplastics and their impact on our oceans. And it's involving passengers in the process. On our sailing, we participated in some of the research, and, frankly, had fun doing it. It started with a quick introduction to our onboard scientist, Dr. Brandi, who has plenty of impressive degrees and more enthusiasm than most of us could muster on our best days. She'll have you fully believing science is the coolest thing ever five minutes after you meet her.

From there, she took us to The Hangar, where she showed us the monitoring equipment and talked through what they're reporting, then took us to The Lab, a bright white room filled with microscopes and other scientific equipment. Donning white lab coats, we paired up and stood behind microscopes, awaiting instructions. Dr. Brandi explained the dangers of microplastics and telling us about how samples were collected. She told us we'd each been given samples, and our jobs would be to look for those plastics under the microscopes.

A quick tutorial, and we were off, identifying plastic fibers and fragments, checking off quadrants and debating whether items were plastic or simply organic. At the end, it was clear: Plastics are everywhere, including the pristine waters of Antarctica. We learned, we talked, we debated. That is the intent, and it's unique to Viking Octantis. We've done a number of expedition cruises, and this is the first time we've been hands-on when it comes to scientific discovery. We think this will be a hit with Viking cruisers.

The Hide Bar/Lounge is Just Excellent

A fully new space, The Hide just might be the best spot no one is talking about. Located on Deck 1 forward, and purposely hard to find (you can only reach it by the forward stairs or elevator bank), The Hide feels like an exclusive club. During the day, it's simply a great hangout with brilliant views, thanks to the overwater windows angled for incredible sights. (Imagine a polar bear in the Arctic just feet away -- yes, this could happen.)

At night, the space takes on a speakeasy vibe that plays well with the exposed ceilings and steel. A bar cart is rolled in at 8:30 p.m., and guests can order spirits -- aquavit, Armagnac, whiskey and scotch -- to drink neat or on the rocks.

You can't find wine, cocktails or beer here, it's worth your time to check out the whiskey, only available from companies that survived the Prohibition era. And of course, aquavit is a Viking standard worth sipping with friends after dinner.

New to Viking are The Aula and adjacent Finse Terrace, which fill the space on Deck 2 aft. The Aula is a huge lecture space that will host expedition talks and science chats. The stadium seating in comfortable white leather chairs (the same ones you'll find in the theater on Viking's ocean vessels) overlooks a stage, and an enormous, curved high-def screen, that slides down into the space or brought up so passengers can look out through the banks of floor-to-ceiling windows.

Behind this space is the Finse Terrace, which includes couch seating and warming "fire pits" designed to keep passengers warm even when the weather is cool.

On our sailing, which isn't so heavy on expedition, The Aula has been used mostly as a gathering spot or for showing documentaries and movies. During more expedition-heavy voyages, guests should expect lectures on whales, penguins, glaciers, invasive species and more. Likewise, the Finse Terrace will be great for whale-watching and glacier spotting.

What You Won't Find Viking Octantis

As with all Viking ships, including river and ocean vessels, you won't find casinos or kids onboard. The biggest "missing" factor, for those who have sailed Viking before, is entertainment: There is no formal production show onboard. Instead, expect lectures and roving entertainers. On our sailing, we've got a guitar and keyboard duo who are excellent, playing older hits along with fun versions of more current music.

Will you miss the production shows? Probably not, especially on more intense itineraries where you fall into bed each night after a full day of exploring.

On our sailing, there's probably a small hole, where more formal entertainment would have been welcome. But in truth, it's not necessary.

Like most of the Viking sailings we've done in the past, we have found fellow guests to be collegial, and we've enjoyed spending time talking to new friends and meeting people.

With Octantis, Viking has found just the right formula for bringing together the familiar and comfortable, adding in excellent food and excursions that combine education and fun. It's a welcome entry into the expedition world.