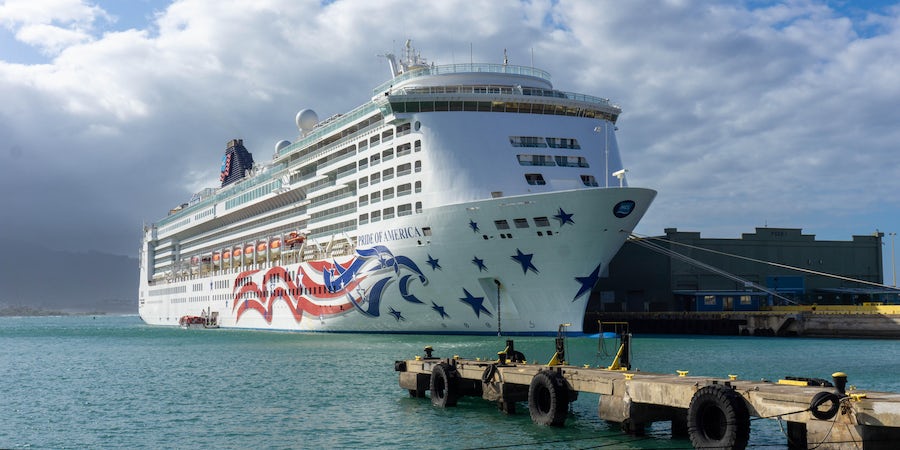 Pride of America alongside at Kahului on Sunday, April 10, 2022 (Photo: Aaron Saunders)

Pride of America Is Sailing Again: Live From Norwegian Cruise Line in Hawaii

On a calendar, April 9, 2022, seemed like any other Saturday. For Hawaii cruise enthusiasts, it marked the day that Norwegian Cruise Line's Pride of America started sailing again, after a two-year absence from the region due to the COVID-19 pandemic.

The 2005-built Pride of America is the only large-scale, U.S.-flagged ship in the entire cruise industry. Because of that, it is able to offer Hawaii cruises that sail roundtrip from Honolulu -- a sharp contrast from other cruise lines that must sail Hawaiian cruises from the U.S. mainland in order to satisfy American cabotage laws.

Norwegian has been trying to restart Pride of America on an almost quarterly basis. It looked like January was going to be the month that cruise came roaring back to the Hawaiian Islands, but terms still needed to be hammered out.

When Pride of America cast off its lines on April 9, the ship carried just 50 percent of its total passenger capacity on its triumphant return to this slice of Paradise.

"Being the only cruise line to sail year-round from Hawai’i, we’re thrilled to be back at last," said Norwegian Cruise Line president and chief executive officer Harry Sommer in a statement released Monday. "Pride of America will once again offer thoroughly immersive itineraries and deeply authentic experiences that support business and tourism in Hawai’i, while providing travelers with everything they seek from a vacation in paradise."

Pride of America: A Unique Legacy, Burnished By 2021 Drydock

Norwegian Cruise Line's Pride of America is a ship with a rich history that began long before it even set sail. It was originally ordered by American Classic Voyages under the codename, "Project America". American Classic Voyages had operated two classic ex-ocean liners pressed into Hawaiian service thanks to their U.S.-registry and drew up replacement plans for the aging vessels in 2000.

American Classic Voyages went bankrupt in October 2001, and the unfinished hull of Project America sat at the Litton Ingalls shipyard in Pascagoula, Mississippi, along with parts for a second sister-ship that never saw the light of day.

Enter Norwegian Cruise Line, which swooped in and bought up all materials related to the project in 2002 for its new Hawaiian venture. In order to finish Pride of America, the line lobbied the government for permission to complete the hull and outfitting at Lloyd Werft shipyards in Bremerhaven, Germany -- the same yard that had successfully stretched three previous Norwegian Cruise Line ships in the late 1990's.

Pride of America was flagged in the United States and registered in Honolulu and debuted in the summer of 2005.

The ship's first design could best be described as garish. Interior décor relied heavily on vibrant, almost fluorescent color schemes and was awash in over-the-top Americana, complete with bunting over windows and plenty of star-spangled red, white and blue.

Fast forward 17 years. When I embarked Pride of America in Honolulu on Saturday, I found a ship that has matured. The décor has been toned down substantially, with wall treatments, carpeting and soft furnishings showcasing more sophisticated colors and patterns that reveal a quiet Hawaiian-American influence.

Throughout, Pride of America sparkles. With a substantial 2021 drydock in Portland, Oregon behind it, passengers will find some major improvements aboard this unique ship.

The biggest one: all balcony staterooms have had their old doors and windows ripped out completely, replaced with newer, more modern ones. Ditto for the old metal-style balcony railings: these have been entirely replaced with plexiglass railings and composite rails. New synthetic decking is present throughout the vessel.

Make no mistake about it: While most cruisers may not notice these changes, they do enhance passenger comfort. Newer doors and windows are easier to open, keep sound out better, and are typically more efficient. The new plexiglass railings make the ship feel newer than it is -- something that is enhanced by the new headboard lighting and sophisticated décor in passenger stateroom corridors.

During my evening walkabouts around the ship, I've also noticed new LED-lighting fixtures in elevator banks and lobbies and new wall treatments. Say goodbye to those oversized prints of Hawaii and past Hawaiian ships (remember Pride of Aloha, anyone?), and hello to a décor that is decidedly upscale throughout.

Sure, there are still whiffs of 2005 nostalgia onboard. The eye-popping colors of the shopping arcade on Deck 5 are still in full swing, and Norwegian's mid-2000 habit of painting clouds and blue sky on ceiling tiles in the buffet lives on. But it works. This is a ship that, much like Hawaii itself, is fun, colorful, and steeped in tradition.

The restart of Pride of America, some eight months later, is no less important. The very fact that this is being written onboard this ship as we sail the (admittedly stormy) seas between Kahului and Hilo is nothing short of miraculous.

A few passengers have been overheard to remark that they're on a shakedown cruise -- and they're not wrong. This is the ship's first cruise in revenue service in over two years, and Norwegian is taking a cautious approach.

To that end, Pride of America is sailing well below standard double-occupancy capacity of 2,186. That means a lot more personal space for everyone onboard, though that will gradually change, too, as the weeks go on.

The reduced passenger count also means that a number of amenities are closed. Only two of the ship's specialty restaurants -- Cagney's Steakhouse and Le Bistro (sometimes referred to as Jefferson's Bistro on this ship) -- are open for diners. The rest -- Moderno Churrascaria, East Meets West and La Cucina -- are closed.

In addition, the Skyline Main Dining Room is only open for dinner. Otherwise, the dining options for breakfast and lunch are the Aloha Café, the ship's buffet located on Deck 11 aft; and the Cadillac Diner, a surprisingly-great little spot of Americana tucked away on Deck 6 amidships. Even better, it's open 24 hours a day.

Several bars, like the Gold Rush Saloon, Key West Sports Bar and the Waikiki Bar on Deck 13 are shuttered as well due to the lack of passengers, though all of the ship's interior bars are open for business. Most of the completely closed venues are outer-deck locations, though opening hours have been adjusted for several bars, including John Adams Coffee Bar and the Napa Wine Bar, both of which close at 10 p.m.

Those looking for a late-night libation will have to head on over to Pink's Champagne Bar on Deck 6 (open until Midnight), or the bar within the Mardi Gras Lounge, which is open "until late".

The shuttered bars and restaurants won't remain that way for long: as passenger counts ramp up, so will onboard staffing, and that will allow the ship's extra venues to host paying passengers once again.

In our experience, the closures haven't affected the onboard product at all. Bars and lounges are rarely crowded, and while securing a reservation at Cagney's or Le Bistro requires a bit of finagling, the food onboard has so far been good to quite good at the ship's complimentary dining venues. I love East Meets West, but I haven't missed it on this cruise.

Passengers should also be aware that just as this sailing is the first trip out for them to Hawaii in two years, it is also the crew's first run in two years -- though the ship is headed up by longtime Norwegian Cruise Line General Manager Kaj Turunen, who has sailed aboard Pride of America for numerous seasons and offers a steady hand when it comes to guidance on service onboard.

To that end, I've found service from the ship's predominantly-American crew (with a healthy dose of international team members thrown in the mix) to be friendly and amiable. Some crewmembers are old hands at this and perform duties with ease; others are still learning but are disarmingly polite and unfailingly gracious. At one point, about three staff members were all hunting down cutlery for us when our breakfast in the Cadillac Diner came but the silverware did not. The missing utensils were finally tracked down and delivered with many apologies.

There are other small complications, to be expected on the first journey back: some shore excursions are unavailable because they've been cancelled by operators, while others are canceled due to lack of numbers -- there just aren't enough passengers onboard to meet minimum requirements for some tours.

Overall, however, it's hard to hold this against the overall experience, which has been unexpectedly charming. Entertainment, including live music, has been fantastic. Old cruise standards like the Love and Marriage Show are still held onboard, as are production shows and immersive Hawaiian cultural events like lei making and Hula dancing.

This is a bucket-list trip for many, and the star of the show -- onboard and ashore -- is Hawaii itself.

Because Pride of America sails roundtrip from Honolulu, it offers passengers something that Hawaiian cruises departing from the mainland and Canada do not: Time. NCL says passengers enjoy over 100 hours ashore on its weeklong itineraries aboard Pride of America and indeed, I've never spent less time aboard a ship during the daytime hours. In fact, I've started feeling guilty about it.

That, however, is precisely the magic of Pride of America. The ship serves as a comfortable home base from which to explore Hawaii; a floating resort that just happens to move to a different location every other day.

We've been surprised at just how relaxing this experience has been. We rented cars for the last two days from Kahului Airport (a short 10-minute cab ride from the pier) and have set out to points afar on Maui, exploring Lahaina and the beach-resort paradise that is Wailea, on the Island's western side. HBO fans might recognize the landscape from the miniseries "White Lotus", which was filmed at the Four Seasons Wailea.

With so many overnight calls, there is no pressure to be back at a set time. Feel like taking in some nightlife? It's yours to enjoy. Want to have a ship day and literally not go ashore? That's fine, too. The choice is yours.

On our weeklong itinerary, Pride of America departs Honolulu and spends two days in Kahului, Maui before continuing on to Hilo for a one-day call. The following day, Pride of America tenders off Kailua-Kona (the ship's only tender port), and concludes the week with a one-night, one-and-a-half-day stint in Nawiliwili, Kauai before setting out for an afternoon of cruising the Na Pali Coast.

Pride of America's itinerary is as immersive as a river or expedition cruise, wrapped up in a big-ship package. It's wholly unique and, after only three days onboard, I can say it's something I wish other cruise lines would do more of.

I still have four more days of adventure aboard Pride of America in Hawaii to go, and I'm already looking at how I can come back and do it all over again.