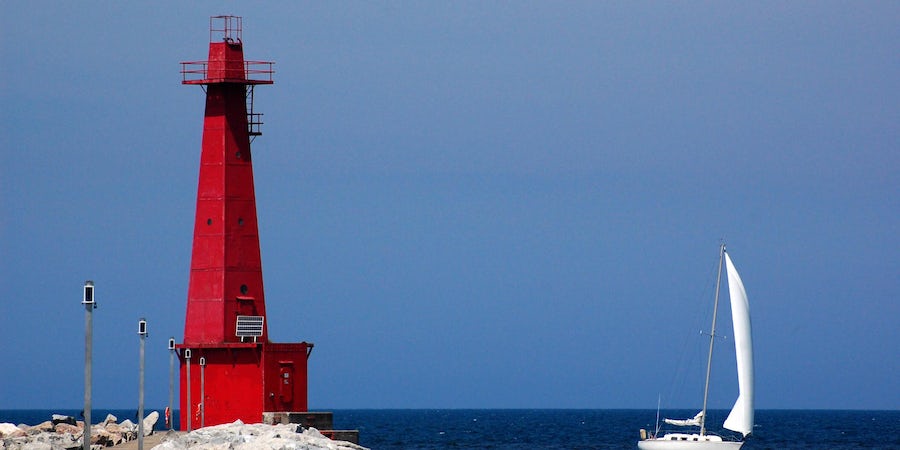 Great Lakes cruises are making a comeback in 2022, as American Queen Voyages (AQV) is sending its cruise ship, Ocean Navigator, back to the region for the first time in two years. But if you're looking for more U.S. cruises, other lines are also heading to the region, including Viking's new expedition vessel, Octantis.

The Great Lakes cruise boom has been a while coming. While a few small cruise ships sailed the Great Lakes before the COVID-19 pandemic, it wasn't necessarily a route that attracted much attention, particularly from American cruisers.

According to Bierdz, Great Lakes cruises tick many of the boxes that people are looking for right now. That includes small, boutique cruises that are close to home and don't require lengthy overseas flights.

Ocean Navigator holds 202 passengers and is AQV's second best-selling ship this season. Ocean Victory, which is the company's new expedition ship coming to Alaska, is the first.

With COVID-19 variants and continued fears over testing and quarantine, travelers are searching for cruises that are easy, Bierdz said. And Great Lakes itineraries include homeports such as Chicago, Toronto and Montreal that are high on tourists' must-visit lists in their own right. Even better, AQV will be docking its overnight ships at Navy Pier in Chicago -- an advantage no one else has.

The new focus on Great Lakes cruises opens up a variety of ports that have rarely seen ships, with a season that runs early May through late September.

On AQV, the stops beyond homeports include Michigan's quaint Mackinac Island, the locks of Sault St. Marie and Niagara Falls, as well as Detroit and Cleveland. Some longer itineraries offer passengers the opportunity to visit all five Great Lakes.

The line will have its two remodeled 202-passenger vessels in the area. Ocean Navigator is boarding passengers in Savannah today for a cruise up the U.S. East Coast en route; the first Great Lakes sailing is May 9, from Toronto. Ocean Voyager will join its sister ship in Toronto on May 12.

Pearl Seas Cruises is also returning to the Great Lakes with its single vessel, the 210-pasenger Pearl Mist, in late May. The ship will only stay in the Great Lakes for a few months, however, before concentrating on coastal New England sailings.

Viking Octantis will be in the Great Lakes from late April through the end of October. The ship is currently sailing from Barbados to New York; Cruise Critic is onboard and will be filing a live report.

Before the COVID-19 pandemic, international passengers were the most likely to cruise the Great Lakes; the French line Ponant and the German line Hapag-Lloyd offered different sailings that often sold out.

In 2022, Ponant will offer a handful of fall Great Lakes cruises between Toronto and Miwaukee on its expedition ship Le Bellot. Hapag Lloyd is not returning to the region until 2023.

When AQV restarted their American river cruise in 2021, they predicted a bump in Great Lakes bookings. Passengers would come to them after a river cruise and ask what else they had in North America, Bierdz said.

Bierdz says that AQV's Great Lakes cruises are drawing passengers from California, New York, Pennsylvania, Texas and Florida. That signals a continued interest among U.S. travelers in domestic travel, which is now expanding deeper into cruises across the United States. He also sees an emergence in drive-to cruises in the Great Lakes region, noting plenty of interest from travelers in Michigan as well.

AQV's sister company, Hornblower, has exclusive rights in many locations that will also work in AQV's favor at Niagara Falls, where the day cruise company provides tours of the national park.

For travelers weary of the last-minute changes and COVID-era stresses, a Great Lakes cruise promises an easier and more reliable cruise, Bierdz said.  (What are your thoughts on flying internationally to cruise vs. leaving from the U.S.? Take the Cruise Critic survey).

"We've had opportunity in the last two years to get them (the ships) prepped and ready for this itinerary," he said. "The hardware is good, the itinerary is good, the staffing is good. If you book with us, you're going to cruise. We're not going to cancel on you."