You may also like
Dismiss
Holland America's Koningsdam vs. Nieuw Amsterdam
8 Best Seafood Cruise Restaurants
The Best Month to Cruise Hawaii
Cruise with Us to Alaska
5 Things You'll Love About Holland America's Nieuw Statendam Cruise Ship
Club Orange, Holland America's Priority Program
10 Reasons to Stay in Seattle Before Your Alaska Cruise
Your Favorite Cruise Ship is For Sale? Here's Why You Shouldn't Panic
Why There's Still Nothing Like a Day on the Water
First Cruise Ship Set to Return to Canada On Saturday After Two-Year Pause on Cruising 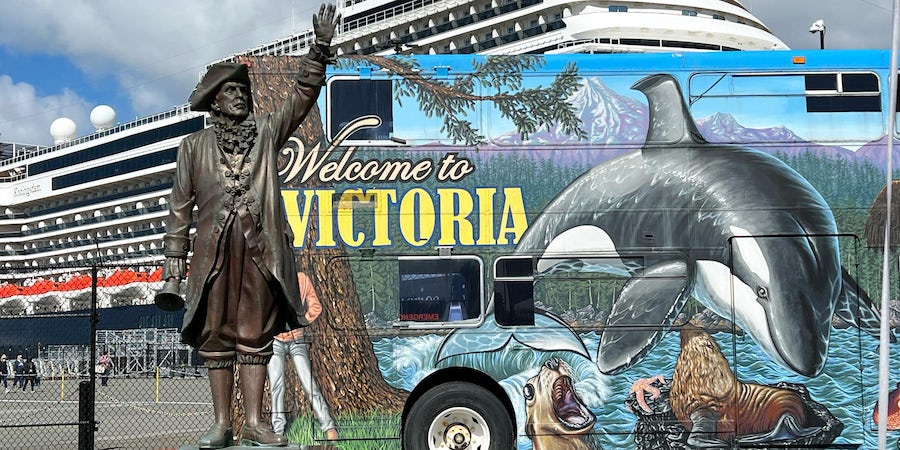 HAL's Koningsdam being welcomed in Victoria, B. C. (Photo/Harriet Baskas)

Cruising is Back In Canada After Two Year Ban and Block From Ports: Just Back From Holland America Line's Koningsdam

After a ban of more than two years due to the COVID-19 pandemic, cruise ships are back making port calls in Canada.

On Saturday, April 9, Holland America Lines’ Koningsdam was the first ship to dock in Victoria, British Columbia, after the port had undergone a block of 905 days. A contingent of local well-wishers, TV crews, and excursion buses welcomed passengers as they streamed off the ship. Water taxis tooted their horns in Victoria Harbour. And more than a half dozen local trade and tourism officials gathered on a nearby pier to mark the milestone with emotional and celebratory speeches.

Holland America President Gus Antorcha was on hand for the ceremony and noted that not only was this the first visit by a cruise ship in Victoria – and Canada – in more than 2 years, but it was also Koningsdam’s maiden visit. More will arriving soon, as Victoria is a popular stop for cruises heading to Alaska.

"During the coming summer season, we anticipate brining more than 750,000 guests to Victoria with more than 45 calls on six ships," said Antorcha, noting that Holland America and rest of the cruise industry has worked closely with Transport Canada and global health experts to make sure the cruises are following the latest guidance and rigorous safety standards. "We are thus able to deliver the cruise experience our guests are looking forward to and one that is safe."

Ian Roberston, CEO of the Greater Victoria Harbour Authority, said "the last two years have been difficult and uncertainly was the word of the day," but that Victoria shop owners, businesses, and attraction are excited to be see visitors back and were standing by with warm welcomes.

Robertson says Victoria expects 358 ship calls this season, about one hundred more calls than 2019. "It’s a really great rebound," he said, and reflects the demand of cruising in Alaska.

"We know people come here on their way to Alaska and get a taste of Victoria. But they are surprised by what they see, they love it, they feel welcome, and many come back."

On Sunday, April 10, Koningsdam made it maiden visit to Canada Place in Vancouver and marked the return of the cruise season to that city after two years as well. From here, Koningsdam sails to Hawaii and will be based in Vancouver for a season of Alaska departures.

Vancouver has been the main homeport for cruise to Alaska for more than 35 years and this year more than three hundred cruise ships are expected to call at the Port of Vancouver, representing an 8% increase in cruise visits from 2019. The season is set to stretch into November, with the last cruise ship of the season, Crown Princess, scheduled to depart Canada Place on Wednesday, November 2, 2022.

In addition to Holland America, several new cruise lines will be calling on Vancouver this season, including Aura Expeditions, Lindblad Expeditions, Scenic Tours, and American Queen Voyages, according to the Port of Vancouver. In addition to Koningsdam, new ships calling on Vancouver will include Discovery Princess, Majestic Princess, National Geographic Orion, Norwegian Spirit, Ocean Victory, Quantum of the Seas and several others.

"The cruise industry has a significant impact on local businesses and supports so many jobs," said Royce Chwin, president and CEO of Destination Vancouver, at a dock side event marking the Koningsdam’s arrival. "What a long two years it’s been for everyone who’s livelihood has been affected by the absence of the ships in the harbor."

Bruce Horn was one of those workers affect by the absence of cruise ships in Vancouver. He is the cruise assistant for Ceres Terminals Canada, which operates the Vancouver cruise terminal, and during the past two years one of his assignments was running the vaccine registry at Canada Place.

"It’s been very, very quiet here," Horn told Cruise Critic in the suddenly busy terminal. "But I was so happy this morning when I turned the corner and saw the ship here this morning that I almost dropped my coffee."