You may also like
Dismiss
The Best Month to Cruise Hawaii
Cruise with Us to Alaska
Where You Can Cruise to Onboard Princess' Newest Cruise Ship, Sky Princess
10 Reasons to Stay in Seattle Before Your Alaska Cruise
Your Favorite Cruise Ship is For Sale? Here's Why You Shouldn't Panic
Why There's Still Nothing Like a Day on the Water
Tallying Up the Economic Fallout from the Lost 2020 Alaska Cruise Season
What's Happening With the 2022 Alaska Cruise Season?
Will Cruises to Canada Go Ahead In 2022? Canadian Cruise Ports Are Betting on It
Cruising is Back In Canada After Two Year Ban and Block From Ports: Just Back From Holland America Line's Koningsdam 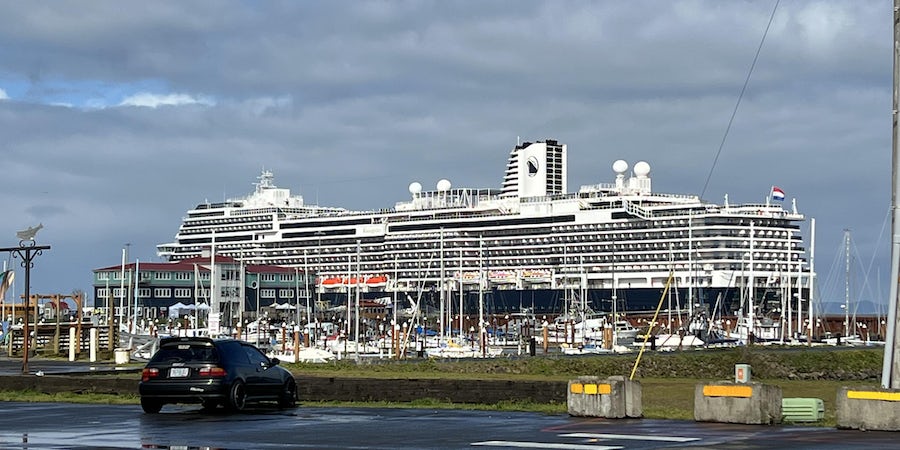 Canada reopens to cruising this weekend after more than a two-year hiatus due to the COVID-19 pandemic. At the forefront of the return is Holland America Line's Koningsdam, which set sail from San Diego on April 4, and will be the first cruise ship to call on a Canadian port in 905 days.

After its visit in Astoria, Oregon today, the Koningsdam will head to Victoria, British Columbia for arrival on Saturday morning, April 9. There, residents have been invited to the breakwater and between the two piers "to wave the Koningsdam in as she throws her lines," Brian Cant,spokesman for the Greater Victoria Harbour Authority, told Cruise Critic.

"We are thrilled to be the first cruise line back into Canada after such a long absence, and we look forward to celebrating a great moment for everyone who loves to travel and for those in Canada and Alaska whose livelihoods depend on tourism," said Gus Antorcha, president of Holland America Line.

In addition to being the first ship to visit Victoria in 905 days, Koningsdam's visit to Victoria marks the maiden call for the ship in this port. And to mark both milestones, officials from Holland America and various local governments and agencies will be on hand in Victoria to celebrate the return to Canadian cruising.

"Greater Victoria is delighted to welcome back cruise lines to our home," said Paul Nursey CEO, Destination Greater Victoria. "When cruise passengers disembark, they will see that Greater Victoria is just a little different from other ports of call, but in a positive way. A strong sense of local community, a sustainability ethos and a variety of high quality locally curated shore excursions await."

In 2019, Victoria welcomed 256 cruise ships from April to October. This year they expect 364 ship calls, bringing millions of dollars back to the local and regional community and supporting hundreds of jobs.

However, Koningsdam wasn't supposed to be the first ship to dock in British Columbia since the beginning of the pandemic. Princess Cruises' Caribbean Princess was initially scheduled to dock in Victoria on April 6, and then in Vancouver on April 7. But, unfortunately, the ship's sailing from San Francsico to Victoria and Vancouver end up being canceled.

Princess Cruises said the decision was made to allow added time for a planned extensive dry dock. "This additional time will help assure the vessel is up to our highest standards in advance of the upcoming busy summer season," the company said in a statement. But the Vancouver Sun and other news outlets reported that the cancellation may actually have been connected to the fact that the U.S. Centers for Disease Control (CDC) had put the Caribbean Princess on "orange" status, which means at least 0.3% of the passengers and crew had tested positive for COVID-19.

That meant Koningsdam, already scheduled to dock in Victoria on April 9 and Vancouver on April 10, moved into ‘first place' for marking the return of cruise ships to Canada. (CDC currently lists Koningsdam's status as green – indicating no cases of COVID-19).

"Of course, I didn't know that this was going to be the first ship to visit Canada after the closure," said Linda Mercer, a four-star Mariner Society member from Lockhart, Texas, "but I am pleased. It is my first time on this ship, and I had a trip booked and canceled last year, so being on this ship and now also being on the first ship to return to Canada is icing on the cake."

After spending the day in Victoria, the Koningsdam will end its current seven-day coastal cruise at the Port of Vancouver, which will be the ship's homeport for the summer Alaska season. Festivities celebrating the return to Canadian cruising will continue there.