You may also like
Dismiss
5 Tips for California Cruises
Embarkation in Los Angeles (San Pedro): Cruise Terminal Parking, Address and Amenities
Things to Do in Los Angeles Before a Cruise
What is OceanMedallion on a Cruise?
OceanMedallion Supports Crew, Delights Guests
Where You Can Cruise to Onboard Carnival's Newest Cruise Ship, Carnival Panorama
Grown & Sexy Cruise
10 Best Beaches in Mexico for Cruisers
Most Amazing Cruise Sunset Photos
Princess Cruises Discovery Princess Cruise Ship Debuts in the Mexican Riviera 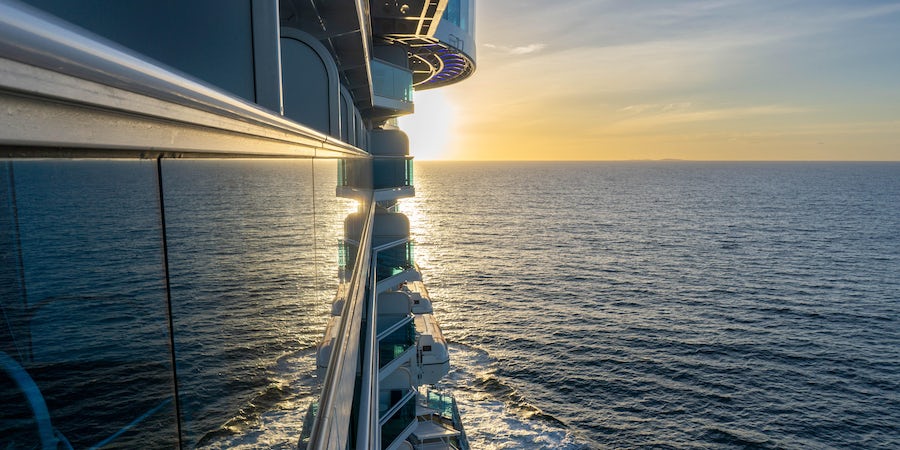 Just Back from Discovery Princess: Hits and Misses

After a week aboard Princess Cruises' brand-new Discovery Princess cruising the Mexican Riviera, we're finding it hard to leave both the ship and the destination.

Discovery Princess is making its debut on the Pacific Coast, with sailings to the Mexican Riviera ports of Mazatlan, Puerto Vallarta and Cabo San Lucas. It's a fantastic itinerary that is readily-accessible for those living near the Port of Los Angeles, but also for those willing to make the flight out to LAX.

With so many new ships debuting in the Caribbean and Europe this year, it's nice to see Princess Cruises' renewed commitment to its West Coast deployment. Discovery Princess is the newest ship on the West Coast, and as we've discovered over the past week, also one of the most comfortable, offering a product that will appeal to long-time Princess passengers, but also to those who are new to the line (and even new to cruising).

Although Discovery Princess will be headed north to Alaska in no time at all, it will return to the Mexican Riviera in the fall and winter of 2022-2023 and will even host the special Love Boat-themed cruise that departs from Los Angeles on October 22, 2022.

Fifty years later, Princess Cruises still operates a heck of a cruise to this often-overlooked but incredibly rewarding destination.

For cruisers looking for a good quality cruise vacation that won't break the bank, Discovery Princess offers a number of great reasons for setting sail.

The Specialty Dining Is Superb

From the classic Crown Grill steakhouse to the French-themed Bistro Sur La Mer, specialty dining aboard Discovery Princess shines. Not only are the prices shockingly reasonable (just $29 per person for the upscale Crown Grill experience, compared with almost $60 for a steakhouse experience on Royal Caribbean), the culinary creations, service and atmosphere are worth giving at least one a try on your voyage. A seafood meal in Crown Grill was one of the best dishes we've ever eaten, and casual diners might want to test out the Salty Dog Gastropub for a unique three-course meal that's just $18 and served up in an informal atmosphere.

It is also worth mentioning that the complimentary food in the ship's main dining rooms (named after Alaskan towns) is leaps and bounds better than our September 2021 voyage aboard Majestic Princess.

The real sleeper hit of our voyage was something that Princess has been working on since the pre-pandemic times. MedallionPay is designed to simplify payment ashore, with vendor's signing up to accept Princess Cruises new touchless contact payment method that uses your credit card on file on your MedallionClass profile, and your Medallion itself, to facilitate payment.

Sure, MedallionPay is found at Diamonds International, Del Sol, Effy, and a host of other usual suspects in the world of cruise retail. But we were pleasantly surprised to find it at a number of smaller shops, bars and restaurants in both Cabo San Lucas and Puerto Vallarta, and we used MedallionPay in Cabo to purchase a beer.

Plus, cruisers get 7% of their MedallionPay purchase back on their shipboard account -- not much for my humble cerveza but something that will add up for those making significant purchases ashore.

This is a total win for Princess, particularly in the Mexican Riviera. No more fumbling for cash or worrying about credit card safety. Just tap and go.

Princess already offers MedallionPay in many Caribbean ports, and will expand it to Juneau, Ketchikan, and Skagway this summer. Shops participating are well-identified with "MedallionPay Accepted Here" signage that is large and can't be missed.

If you love live music, you'll love afternoons and evenings aboard Discovery Princess. Musical performances routinely took place in the ship's Piazza atrium throughout the daytime, with things really kicking off at night. Crooner's on Deck 6 -- always a popular watering hole -- was packed to capacity each evening, particularly when Piano Entertainer AJ Clarke would come on at 9 p.m.

We found ourselves making our evening choices around entertainment (and even dinner) based on who was performing at a given hour. Pre-dinner cocktails always found us in the clubby Crown Grill Bar, listening to Ukrainian pianist Iryna Draganova. Then, we'd graduate to the atrium to listen to Irish vocal duo Aileen and Sticks.

Evenings always closed out in the Take Five lounge on Deck 6, where the Larry King Trio would play well into the wee hours.

It's superb quality entertainment that we found to be on-par with Holland America's Music Walk or Cunard's onboard entertainers. While we missed having some authentic Mexican music (a local Mexican band was present on a 2008 sailing of Golden Princess, the musical entertainment has definitely moved up several notches in the past few years, coming from a low point in 2015 when we heard the house band on Star Princess absolutely murder a rendition of Toto's "Africa".

Located all the way up on Deck 18 forward, The Sanctuary has long been Princess Cruises' relaxing hideaway. Available as a half-day or full-day pass, this private sun deck has truly come into its own aboard Discovery Princess, with more amenities and more sophisticated décor than the same space found aboard Grand-class vessels like Grand Princess and Caribbean Princess.

Waiters will bring you all sorts of refreshing libations while you gaze out onto the expanse of the Pacific. A Bento Box of treats included with admission offers delicacies such as Citrus Fruit & Kiwi with almonds, Sesame Tuna and a Fattoush Salad with Grilled Chicken. (You can also order a hamburger if that's more your speed).

We tried the Sanctuary out on an admittedly blustery sea day, but the space was still pleasant and enjoyable. Be sure to book this the second you board; spots fill up quickly, particularly for the much-sought-afternoon timeslots.

Decor That Ushers In "The New Princess"

Princess has used some of the same interior decor motifs since the debut of Sun Princess (which left the fleet in 2020 during the height of the pandemic) in 1995. It was a tried-and-true formula of unassuming colors, safe woodgrains, and inoffensive artwork that Princess didn't really monkey with for the next two decades.

That's all changed aboard Discovery Princess. Stateroom corridors now offer soft grey woods and accents, while doors have a woodgrain texture instead of the white-paneled variety Princess used since forever. The carpeting in corridors and elevator banks has also changed for the first time in a dozen years.

Gone, too, are some of the features of the earlier Royal-class ships that never really landed: the open cavern below the Skywalk that looked down onto passengers' balconies, and the decorative fountain show in the center of the pool deck that took up unnecessary space.

While Discovery Princess isn't appreciably different from its Royal-class sisters in terms of layout (even the much-older Grand-class still has the same basic general arrangement feel), it does feel like a more unique and distinctive ship. Crooner's rolls out bold shades of gold, black and crimson, while the aft-facing Vista Lounge removes the dark, heavy décor present on other Royal-class ships in favor of more muted colors and soft, recessed lighting.

As with any new ship debut, our sailing aboard Discovery Princess has had its share of teething problems.

Embarkation in Los Angeles Was Challenging

This doesn't involve Princess so much as it does the Port of Los Angeles, which fumbled the ball when it decided to have Discovery Princess berth at a location with no physical cruise terminal.

Embarkation in Los Angeles (San Pedro) was one of the more complicated we've gone through since cruising's restart, with check-in formalities completed at Pier 93, and security and embarkation conducted at Pier 50 -- some 2.3 miles to the south. Long lines and a lack of organization marred the experience, with port officials and check-in staff seeming confused and overwhelmed. Luggage was trucked over on rented U-Haul vans, and passengers were shuttled on motorcoaches and sprinter vans.

Total time from curb-to-cabin was just shy of two full hours. The good news? Someone at Princess did some major arm-twisting; Discovery Princess berthed on Sunday, April 3 at Pier 93, and is not scheduled to call on Pier 50 again.

A long-running challenge for Princess involves the MedallionClass app, which failed to work properly for much of our sailing, with both dining and daily activities features non-operational for several days.

Here's the thing: we're huge MedallionClass converts. The ability for your Medallion to open your stateroom door, and to speed up embarking and disembarking the ship in port and enable crew to recognize you by name, is superb. It is technology that does, as Princess has always claimed, enhance your cruise experience.

The app, however, is another story. We found it unintuitive and confusing, with 30 individual menu items on the app's homepage, 10 options under a submenu on the app's upper-right corner, and five different options under your profile picture on the left.

Drink orders made through the app arrived quickly -- a splendid Margarita took less than five minutes to find us poolside -- but food orders never arrived. Our account was billed twice for one bottle of wine we purchased at dinner, and again for a mystery charge of $20.66 for something we never purchased -- things that are just not supposed to happen with this technology.

When the app doesn't work, passengers grow frustrated quickly, as most things onboard hinge around the app's functionality. It also places undue stress on the ship's warm and friendly crew, who find themselves pressed into a tech support role or, worse, the recipients of passenger anger.

We wanted to overlook it. We tried to overlook it. But throughout Discovery Princess, the railings on balcony cabins, upper decks and practically any outdoor space are made of plain white plastic and not teak -- or even faux teak. Far from a deal breaker, it just makes the ship's railings look kind of cheap and utilitarian -- odd considering the ship's quite lavish interior décor.

A Great Way to Visit the Mexican Riviera -- And Beyond

In its first year of operations, Discovery Princess will sail a wide variety of Pacific-based itineraries. It will operate its Mexican Riviera cruises along with the increasingly popular California Coastal that traverse the coast of California and add a call in the Mexican port of Ensenada. Later this spring, Discovery Princess will sail for Seattle, where it will homeport for a series of weeklong cruises to Alaska, with port calls on Ketchikan, Juneau, Skagway and Victoria, British Columbia, along with a day of scenic cruising Endicott Arm and Dawes Glacier.

If you’ve cruised with Princess before, you'll find it easy to get acquainted with the newest ship in the Love Boat fleet. There's nothing revolutionary about Discovery Princess -- and that's perfectly okay. In a word where cruise lines are constantly vying to one-up each other with increasingly elaborate onboard amenities, Princess is on a path of quiet evolution, adding new features here and there -- both onboard and ashore -- that enhance its cruise experience.

That strategy is working. Our sailing had a diverse mix of passengers spanning several backgrounds and walks of life. Discovery Princess is welcoming and inclusive; a slice of elegance wrapped in a comfortable, modern, and fun cruise experience. Thrill-seekers need not apply; this isn't that voyage.

Instead, passengers can wrap themselves in Discovery Princess like a warm blanket. Despite its technological hiccups, it is a ship that manages to deliver exactly what passengers expect -- and will do so for years to come.