You may also like
Dismiss
Mexican Riviera Cruise Tips
5 Tips for California Cruises
The Piazza on Princess Cruises
7 Reasons Families Will Love Caribbean Princess
Where You Can Cruise to Onboard Carnival's Newest Cruise Ship, Carnival Panorama
New Cruise Ships 2020
10 Best Beaches in Mexico for Cruisers
16 Pictures of Our Favorite Cruise Balcony Views
Just Back from Discovery Princess: Hits and Misses 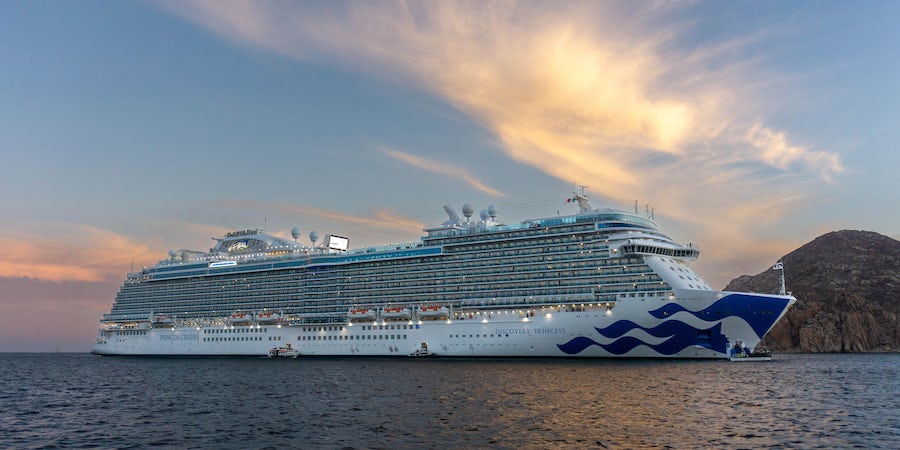 In the fall of 1977, a new sitcom debuted in North America, set aboard a Princess Cruises ship departing Los Angeles for Puerto Vallarta, Mazatlan and Acapulco. The Love Boat became a ratings hit, and can still be seen to this day aboard Princess Cruises ships, including the brand-new Discovery Princess, which set sail on its maiden voyage on Sunday.

While the ports may have changed a bit -- Discovery Princess will call on Cabo San Lucas, Mazatlan and Puerto Vallarta by the week's end -- the magic and adventure of being out on the ocean has remained the same as it was back in 1977. Captain Stubing, Doc and the gang could have only dreamt of the kind of luxuries that would be present aboard Discovery Princess -- the sixth and final member of Princess Cruises' Royal-class ships that first debuted in 2013.

Cruise Critic boarded Discovery Princess in Los Angeles for a look at what the newest ship in the Princess fleet has to offer.

This year is a banner one for new cruise ship launches, but Discovery Princess differentiates itself right off the bat by debuting on the U.S. West Coast, with the ship operating Mexican Riviera, Pacific Coastal and Alaska cruises from Seattle for its first year of operation.

Although it is the sixth and final vessel in Princess Cruises' Royal-class,  Discovery Princess is most similar to the two latest Royal-class vessels, Sky Princess and Enchanted Princess. Princess has subtly tweaked the layout, design and venues onboard each of its Royal-class cruise ships, and seems to have hit upon the magic formula with Discovery Princess (though we will always miss the fully-enclosed Hollywood Conservatory that is only found aboard middle-child Majestic Princess).

Embarking Discovery Princess, it's hard to not be taken aback by the ship's glittering three-level atrium, surrounded by sweeping staircases, trickling fountains, glass elevators and its central Piazza area. The Piazza was a concept introduced on Crown Princess in 2006, and it has been expanded and improved upon ever since. It is an area to gather in, celebrate in, listen to music and events, and mingle over a custom cocktail or one of the caffeinated libations at the International Cafe (which serves up the most delicious breakfast and tasty light snacks on the ship).

Decor across the ship has also subtly evolved as the line slowly moves away from the staid woods and neutral colors that characterized past ships in the fleet for decades, and Discovery Princess is the latest in that evolution.

While past passengers will find all the spaces they've come to know and love, they might be surprised to see some more modern decor, complete with darker woods, vibrant marbles, and backlit accent panels. Even whimsical artwork and clever puns -- based on the destinations Princess Cruises sails to -- are painted on the steel bulkhead walls all the way aft by the ship's basketball court.

It's a nice touch that shows the playful side of a ship that strives to deliver a cruise experience that is at once traditional and modern.

Discovery Princess: An Oceangoing Home Away from Home

It's easy to get settled in aboard Discovery Princess. The line's new digital muster drill is effortless: just visit your designated muster station, get checked in, and watch the mandatory safety video on your in-cabin television or your smartphone.

Our balcony stateroom is standard-issue Princess, and there's lots of space for storage with the line's open-concept closet adjacent to the bathroom. However, we feel compelled to point out a curious miss -- the bathroom seems dated and even has the old-school (and much hated) clingy shower curtain.

The Princess Luxury Bed, as the line calls it, is superb -- one of the most comfortable at sea, in our humble opinion.

The balcony is on the small side compared to other new ships we've sailed aboard recently, but it still gets the job done. And on Discovery Princess's Mexican Riviera runs, you may well want to spend time on your balcony: whale sightings are common on this route, and pods of dolphins were spotted from the ship as we sailed south towards Cabo San Lucas.

This level of welcoming comfort lends itself to the rest of the ship, too. The staff aboard Discovery Princess are gracious and unfailingly polite and are just as eager to be back at work as passengers are to be back onboard.

It is also easy to find a venue that speaks to you. We were immediately drawn to the nightly live jazz in Take Five, which could be Princess Cruises' most underrated venue. Featuring the Larry King Trio, this small, clubby room adjacent to (but separated from) the ship's casino is so tucked away as to almost be missed by many passengers.

Discovery Princess adds back Crooner's, the popular music-and-martini bar that was missing from several Royal-class vessels. Outlined with dark decor and plush, oversized couches and chairs, Crooner's has become the de-facto gathering spot for pre-dinner cocktails and post-dinner nightcaps, thanks to its convenient location on Deck 6 near the Piazza atrium.

A brand-new entertainment addition here on Discovery Princess is "Deal or No Deal", a new partnership with production company TimePlay to bring the classic hit gameshow to the high seas. Much like its televised counterpart, the live, hosted experience gives passengers the chance to bid on suitcases with prizes ranging from a free cruise to up to $1,000. The first show, which debuted on our sea day as we sailed from San Pedro, was a hit -- and still manages to capture the energy and suspense of the televised show.

(Deal or No Deal will also roll out onboard Majestic, Regal and Sky Princess immediately, with plans to expand it to the rest of the fleet over time).

Back to the Mexican Riviera

Cruising has also returned to the Mexican Riviera, and Discovery Princess sailing into Cabo San Lucas on Tuesday afternoon was just one more sign that cruising is back.

Sail-in to Cabo San Lucas is one of the most striking approaches in the world, with miles of resorts and sandy beaches giving away to Los Arcos and Lover's Beach. Ships anchor in the small bay lining the town, and passengers are shuttled ashore using a combination of ship's tenders and local tender boats.

I've been to Cabo San Lucas many times; I like the port and some of the shore excursions that whisk guests further afar, to places like the historic mission town of Todos Santos.

This time, I wanted to try something that passengers on other ships don't have access to: MedallionPay.

An extension of Princess Cruises' convenient Medallion technology, MedallionPay allows passengers to simply tap their medallions for payment at participating shops, restaurants and bars. The program -- which has debuted in the Mexican Riviera and select Caribbean locations, and which will be offered in Alaska this year -- simply charges your credit card on file on your MedallionApp profile.

I tried it at Solomon's Landing, a staple restaurant right in the inner harbor of Cabo San Lucas. I ordered a Pacifico beer and paid with it using my Medallion bracelet. No cash, no credit cards needed. It was easy -- perhaps a little too easy!

Nest stop, a shore excursion operated by Cabo Adventures -- an all-included sunset sailing cruise, where the views were striking and the refreshments cold.

Now if only I could use my OceanMedallion to tip my shore excursion guides, I'd be set forever.

Discovery Princess is the newest ship sailing the West Coast runs, and a welcome addition at that. Past Princess cruisers will settle right in to the ship's ebb and flow, and those who are new to the line will surely be impressed with the line's solid commitment to onboard and the gorgeous design of Discovery Princess, not to mention the gracious crew and the onboard cuisine, which has so far been leaps and bounds above our Alaska cruise on Majestic Princess last summer.

Still ahead as this article is being written are calls on Mazatlan and Puerto Vallarta, along with two sea days. Stay tuned for more!