You may also like
Dismiss
Columbia and Snake River Cruise Tips
Why American Empress Is the Cruise Ship for You
American Cruise Lines vs. American Queen Steamboat Company
Rolling on the River: Discover the Mississippi River's Best Marine Museums
River Cruise Tips for Wine-Lovers
New River Cruise Ships for 2017
What's New in River Cruising for 2018
Columbia River Cruise Map
How To Cope With Cruising's Pause? Plan Far, Far Ahead 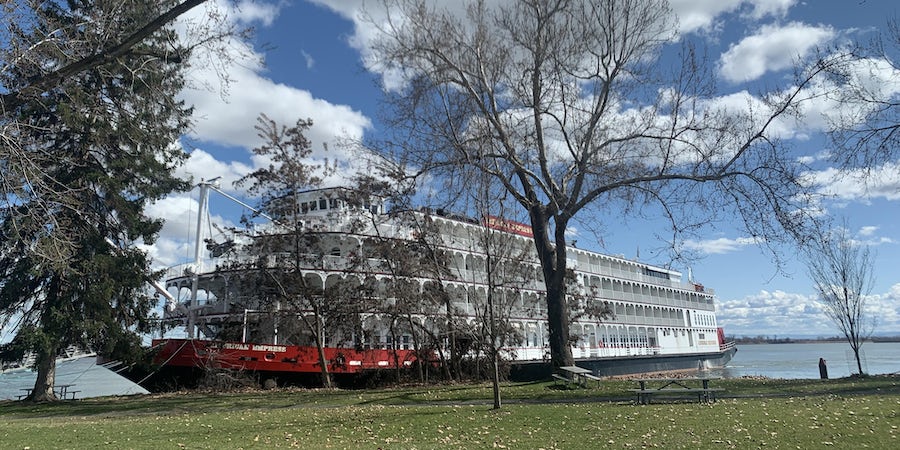 The weather was stereotypically gray and drizzly as I boarded American Queen Voyages’ inaugural 2022 Pacific Northwest river cruise last week. But the forecast was nothing but sunny for the 2022 season as domestic river and small ship lines gear up to take advantage of pent-up, post-pandemic travel demand.

While AQV’s American Empress, a 223-passenger paddle wheeler that sails between Portland and Spokane on the Columbia and Snake rivers, was only about half full for the season’s first cruise, the low turnout is normal for the early sailings when the weather is still chilly. After this week, the next six American Empress sailings are already sold out. And company founder John Waggoner said the company’s fleet of river boats, small coastal ships and its new Alaskan expedition vessel Ocean Victory are about 62% sold for the season.

That’s still behind the 75% mark they would have expected pre-pandemic, Waggoner said, but if current, post-omicron booking trends continue, he said he is optimistic the company will see a mostly sold-out season.

"We call it the waterfall effect," Waggoner said, explaining that as callers find out their first choices are booked and other sailings are filling up, they pull out their credit card to avoid being shut out.

Demand for domestic river and small ship cruises was already growing before the pandemic. And anecdotal evidence indicates post-pandemic demand is being further boosted both by the war in Ukraine and the U.S. requirement that all travelers returning to the states from international destinations present a negative covid test.

AQV said it saw record bookings in the days after the war started. And American Cruise Lines CEO Charles Robertson said they too are seeing strong post-pandemic demand.

While his optimistic view about a new competitor might seem counterintuitive, Waggoner noted that Viking has an unrivaled marketing budget that will help raise awareness of domestic cruising, which he calls one of the industry’s "best kept secrets."

"Everyone says, 'John, aren’t you terrified of (Viking coming in?)' And I go, 'No, I support it.' … In the analogy I use, (my wife) Claudette and I are sitting on the couch and see a commercial for a car. We might look at each other and say, 'You know what, our car is getting a little old. Let’s go buy a car.' But we don’t necessarily just buy the car from the commercial. You shop around. And I personally believe, in my heart, when you shop around you’re going to go with us because I think people that go on the Ohio, Mississippi, Tennessee, even the Columbia River, want that real, authentic experience."

Viking has promoted its ship – complete with a swimming pool on the sundeck – as the most modern and luxurious on U.S. rivers, while AQV sails only paddlewheelers and ACL has a mix of both traditional and more modern, European-style river boats.

I haven’t yet seen the Viking ship, but I have to agree there’s nothing quite like the experience of sipping cocktails in American Empress’s Paddlewheel Lounge while retracing the path of Lewis and Clark as the huge red wheel spins outside the window.

And each of AQV’s ships are unique on the inside. To be honest, I prefer AQV’s newest ship, American Countess, which has the traditional exterior but a contemporary interior with more and larger public spaces, lots of floor-to-ceiling windows and larger cabins. But I know my husband would rather sail American Empress, with its traditional and more period-specific antique flair.

In addition to promoting its authenticity, AQV this year is upping its game in the culinary arena. The line has hired as its new culinary ambassador the Natchez, Mississippi-born chef and famed biscuit maker Regina Charboneau, who helped develop the company’s original menus when it launched American Queen on the Mississippi a decade ago. Besides hosting six special sailings across the company’s U.S. fleet to give cooking and cocktail-making demonstrations this year, she is traveling and researching the line’s various itineraries to develop more regionally focused farm- and river-to-table food, wine and cocktail menus.

If American Empress’s season kickoff sailing was any indication, she’s setting a high bar that just about any luxury hospitality company would be hard-pressed to beat. From fresh fish and salmon to crispy duck, smash burgers and vegan-based options, each day's menu featured something for everyone. And over the course of eight days, I can honestly there wasn’t a single dish that disappointed.

During our eight-day sailing, we explored the historic fur trading center of Astoria, Oregon, Multnomah Falls in the scenic Columbia River Gorge, regional wineries, even the National Neon Sign Museum in The Dalles, Oregon. We also got to tag along with Charboneau in Astoria as she hunted down locally made absinthe, whisky and bitters for an on-board Sazerac making-and-tasting. And we were invited to help her explore local dive bars, spice shops, pizza spots and other hidden gems along the way.

One afternoon, Charboneau, taught us about the different types of salmon, then demonstrated how to make one of that night’s dinner options: fresh salmon with pepper marinade over penne pasta in smoked tomato sauce. Another afternoon, we sampled different types of smoked salmon from Wild Columbia Salmon in Stevenson, Wash.

Charboneau said her mission as culinary ambassador is to find not only the best in local food and drink, but also unique experiences.

"Rivers are a highway we don’t travel anymore," she said. "There’s so much culture and history in all the little towns along the way."

And that’s the broader theme AQV is focusing on as it emerges from the pandemic with a new marketing tagline: "To really see America, you need to leave the roads."