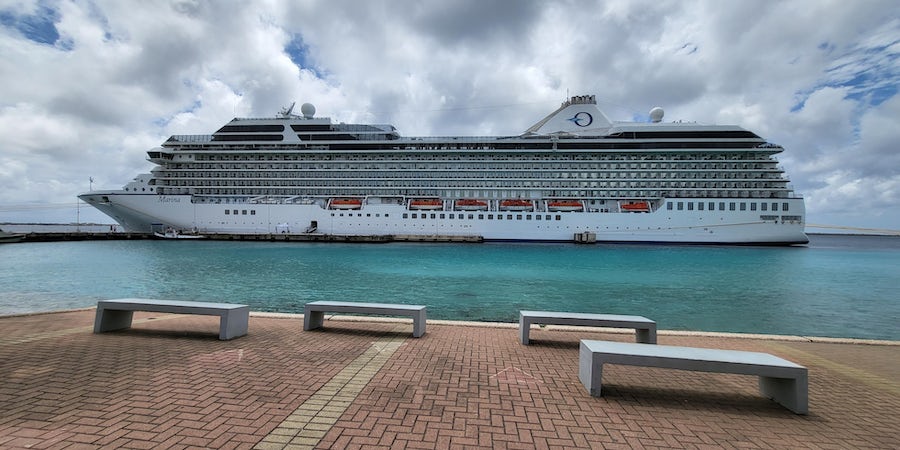 Sailing Oceania Cruises' Marina in the Caribbean: Diving Into Food and an Excellent Wine List

When you walk into Toscana, one of four reservation-only, specialty restaurants aboard Oceania Cruises’ ship, Marina, you'll immediately notice how gorgeous the dishware is. I tell the hostess as much.

“You have a good eye,” she says with a wink. “They are Versace.”

Designer dishes are just one small example of the many elements and touches, seen and unseen, that earn Oceania its reputation of offering the most elevated dining experience at sea. It’s one the brand is proud of, and has intentionally cultivated.

"Many other cruise lines focus on transporting guests to the destinations they visit, or on partying," says Marina’s senior executive chef, Ronald Smith. "At Oceania, we said, 'What can we do differently?'"

We're live on Oceania Cruises' Marina, sailing the Caribbean on a two-week cruise that includes stops in Curacao, Aruba, Bonaire, Barbados, Antigua and St. Maarten. Marina is one of two “Oceania Class” or “O-Class” ships in the line's fleet, which measure at quite a bit larger than the “Regatta Class” sister ships. This means more space for passengers; Marina can accommodate up to 1,250 guests, compared to an “R-Class” ship’s 684.

The ship is only sailing at about 30% occupancy on this cruise from Miami. It's the last Caribbean sailing for the season before Marina departs for a summer cruising the Mediterranean; it won't be back here until December 2022 for another two-week island hopper. After that, Marina heads to South America for early 2023.

More than 98% of the food cooked and recipes served on Marina are made fresh on board from scratch (some of the sole exceptions being breakfast’s English muffins and bagels). Smith estimates that, depending on occupancy and route, between $8,000-$10,000 is easily spent per day on food.

It’s clearly a method that is working: Kathy Ford, 56, and her husband Steve, have sailed with more than six different cruise lines to date, but tell me that Oceania is their favorite "by far." They came from Kentucky for this cruise, their fifth with Oceania, and already have three more sailings on Marina booked. For at least one of them, they are hoping for the chance to stay in one of the three Oceania Owner's Suites, which clock-in at 2,000 square feet. "We are #7 on the waitlist," she wistfully specifies. For this sailing, they settled for the second-most luxurious style of accommodations, the Vista Suite.

Marina's suites of any size are impressive. The multiple, spread-out rooms are ideal for gathering with and entertaining fellow passengers. Mark and Julia Wax of North Carolina invited me to their 1,000-square-foot Oceania Suite to enjoy a gin and tonic (courtesy of the six full-size bottles of premium spirits that came complimentary with their booking) on their expansive private veranda.

Though experienced cruisers, this is their first Oceania sailing. "We have a different way of looking at hospitality," says Ms. Wax, 67, referencing the vacation rental company they own. "The service here is genuine and authentic. They want to pull the feeling of joy out of us."

The ship has eight restaurants onboard, including the flagship Grand Dining Room, a buffet called the Terrace Café, and the casual, poolside Waves Grill.The specialty restaurants are made up of Master Chef Jacques Pépin’s French restaurant, Jacques; the sultry, Asian-fusion restaurant, Red Ginger; the classically tasteful steakhouse, Polo Grill and -- home to the Versace china -- the authentically Italian restaurant, Toscana.

Unlike many other cruise lines, there is no additional fee to dine at the specialty restaurants on Oceania. Guests are entitled to at least one dinner reservation at each of the restaurants, with priority booking for additional reservations given to those staying in the ship’s suites.

Aside from the custom decor and a more intimate and exclusive feel, the food offered at the specialty restaurants is of a higher caliber than in the Grand Dining Room, according to Smith, who has worked on Oceania’s culinary team for 18 years – and at sea for a total of 23. He oversees all of Marina’s dining experiences, from the menus and management of each restaurant (there are 135 cooks on board) to the complimentary cooking demonstrations Smith himself offers guests in the Culinary Center on Marina’s Deck 12.

While the menu at the Grand Dining Room is still fantastic (Smith himself cooks there most nights), I’ve chosen to take advantage of my status as a Penthouse Suite sailor, which means I am entitled to unlimited dining at the specialty restaurants (depending on availability) to successfully reserve a table for two or four every night of the week.

It’s difficult to choose a favorite, but so far Jacques stands out. One of the best dishes was the Soufflé au Fromage de Chèvre Monte Carlo -- a molten goat cheese soufflé with heirloom tomato sauce. It was so light and decadent that I couldn’t help but order it a second time. The service also impresses. It's all in the little touches and details, like the maître d' taking your pre-dinner martini and carrying it to your table on a silver platter.

Chef Smith said that his favorite onboard restaurant at the moment is Red Ginger, and he especially loves the Malaysian Beef Penang. On Smith's recommendation, my partner ordered it during our visit and reported back that the sauce in particular had a great texture, and was very flavorful. I went with the Lobster Pad Thai, a dish that I later saw on ther dinner menu one night at the Terrace Café. It’s good to know that, even if reservations may get more difficult to secure as ship occupancy increases, some of the dishes can be sampled on a rotating basis in the ship’s walk-in restaurants.

Room service is also a fantastic alternative way to experience Marina’s exclusive dining, especially if you’re in a room that offers butler service. Ms. Ford tells me how on one past Oceania sailing, they were exhausted from a day exploring on shore and mentioned to their butler that they would have dinner at the buffet. He arranged to have plates from Jacques delivered to their rooms, instead.

Jane Bonichi from New York, 57, wanted to surprise her husband Andrew with a special birthday celebration, and so, she had their butler, Akshay Shetty, decorate the room beautifully with balloons and spreads of caviar and Champagne while she distracted her husband elsewhere onboard.

Marina’s eighth restaurant is La Reserve, which offers tasting menus with top shelf wine pairings on select evenings and with an upcharge (for a cost of $95 per person, diners receive eight glasses; at least one of mine was generously refilled without my asking). It is a truly excellent experience, from the exquisite dishes to the wondrous wines and unbreaking smile and grace of the restaurant’s head waiter, Red Cenidoza, as he eagerly looked for pauses in our table’s conversation to explain each course.

The Wine List Delivers on Oceania's Marina; Cocktails Not So Much -- Choose Your Beverage Package Accordingly

The wines served at La Reserve are the best on the ship -- and not available anywhere else on Marina, says executive cellar master, Milan Katanic. Don’t think though that missing one of La Reserve’s three menus means you won’t have a wine-derful experience; there are seemingly unlimited opportunities to taste your way around the world, play with your palette, and learn from the ship’s 19 onboard sommeliers (on many other ships, including those larger than Marina, the number of onboar sommeliers top out at just three or four). Multiple somms are stationed in every restaurant, buffet included, for each meal, and you quickly get to know and trust the entire team.

There are afternoon wine tastings available four times a day throughout this sailing, and the first one I attended, "World of Whites," presented by head sommelier Elena Alexandrescu, was outstanding. The selection of five wines from Italy, Austria, Germany, France, and Napa (plus a bonus glass of Champagne) were wonderfully different, and paired with a thoughtful selection of hors d'oeuvres, like vitello tonnato and foie gras sushi. Alexandrescu's knowledge and engaging stage presence made her fascinating to listen to, and led to me scribbling notes as fervently as if I were once again prepping for the SATs.

Unlike at La Reserve, the wines included in the afternoon tastings are available by the glass and/or bottle throughout the ship, making it easy to continue intentionally indulging in your new favorites. The price of the tastings range from $55 to $95 per person, a nice value for all that’s provided, and remain the same price regardless if a guest has a beverage package.

There are two beverages packages that Marina passengers have the option to add to their reservation: the house select, which includes unlimited Champagne, wine and beer during lunch and dinner from $39.95 per guest, per day; and the prestige select, which includes unlimited premium spirits, Champagne, wine and beer throughout the day and evening, from $59.95 per guest, per day.

According to Katanic, a bit more than 20% of the guests on the sailing have purchased beverage packages, with nearly all of them being the prestige select option. Given that the price of drinks adds up quickly onboard (this is not a bargain ship by any means, and all drink orders automatically include gratuity), purchasing a package is a smart move should you want to take full advantage of the sommeliers' expert recommendations and knowledge during meals and beyond.

For those who are greater fans of beer, spirits and cocktails, the beverage package is likely not worth the investment.

Outside of the drinks at Martinis -- the ship’s most sophisticated bar, featuring live piano music by the talented Milan Jasek, and more than 30 different martinis on its menu (including the must-try Big “O” Martini, Oceania’s signature drink made of Grey Goose L’Orange vodka, Cointreau, orange juice, cranberry juice, and fresh lime juice, and garnished with an orange slice) -- the beer and liquor options aboard Marina are disappointing.

The beer list is painfully simple -- not a single craft brew, and certainly nothing local, is included -- and several of the bartenders throughout the ship seem to have been inefficiently trained on best practices for making and serving drinks. Corona has been presented with a Eureka lemon wedge instead of a slice of lime, a pour of bourbon bizarrely served with a small piece of crushed ice instead of a proper ball, and a pour of mezcal served with the obligatory orange slice floating in the spirit instead of on a plate next to it.

Several basic cocktails, like the mojitos at Waves and an old fashioned at Horizons, were fumbled so badly in their mixing to the point of being undrinkable. Multiple guests have expressed similar sentiments to me, even offering to be quoted on the record, should that encourage Oceania to step up their game a bit. It’s puzzling that a luxury brand that places such a high value on wine -- and truly does excel with its offerings -- would put comparatively so little effort into their additional alcohol offerings.

On Oceania's Marina, though, feedback is taken seriously and changes implemented immediately. After the Corona and mezcal incidents, we talked to our favorite bartender, Felipe Barrios. The next afternoon by the pool, his colleague immediately brought a lime-accented Corona. My partner, who wanted to reduce his level of imbibing, was given a list of mocktail offerings.