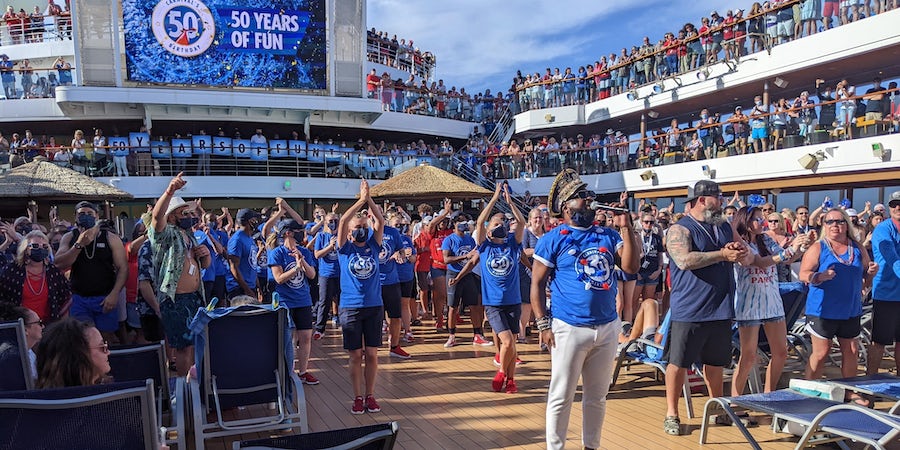 Carnival Mardi Gras first hit the ocean seas on March 11, 1972 on the inaugural sailing for a new cruise ship brand, Carnival Cruise Line. Over the past five decades, Carnival has become a leading line, celebrated by millions of fun loving cruisers around the world.

Today, March 11, 2022, Carnival celebrates half a century of cruising -- and, of course, invited cruisers onboard the fleet's ships for special Carnival 50th anniversary cruises. The planned "Sailabration" included 17 birthday-themed sailings in March, with multiple ship meet-ups-at-sea near Ensenada, Mexico and the Bahamas.

Cruise Critic sailed on a five-day Sailabration cruise trip aboard Carnival Breeze from Galveston to Cozumel last week. Carnival got guests into the spirit right off the bat, having guests board the ship to crew members holding birthday signs to welcome them onboard.

Some things to look forward to on these special Carnival 50th anniversary Sailabration cruises included special activities, themed food and drinks, as well as the middle-of-the-ocean ship meetup with other celebrating Carnival ships -- one of the highlights of our trip.

Carnival Breeze first spent half a day in Cozumel before venturing out to the ocean for our meet-up with six other Carnival ships: Carnival Mardi Gras, Carnival Ecstasy, Carnival Glory, Carnival Pride, Carnival Sunrise and Carnival Vista, before returning to Cozumel the following day.

During the meet-up, each ship hosted simultaneous dance parties out on the Lido Decks. We were encouraged to wear Carnival’s signature red, white and blue -- and to learn a short dance that we were assured was destined to go viral on TikTok. Once the ships were assembled and in position, a video greeting from Carnival commemorating the occasion played and a series of horn blasts blew up into the air.

Cruisers crowded around the ship’s topmost decks, craning their necks and cell phones to get shots of the other cruise ships lined up across the waves.

For one night, the cruise line aimed to "recreate a voyage back in time with your favorites from our classic menu, historic dishes that epitomize food at Carnival" with a special 50th anniversary menu. Some dishes included West Indian pumpkin soup, escargot, spaghetti carbonara, prime rib and babaloo cake.

Some Disappointment Among Passengers

Though most passengers we talked to enjoyed their cruise overall, a few said they felt that the celebrations didn’t quite live up to expectations for a Carnival 50th anniversary cruise.

"We had a blast but were very disappointed about the hype with the Sailabration," said Ken Pharr from Farmers Branch, Texas. Pharr mentioned he had read there would be fireworks and a midnight buffet during his cruise on Carnival Breeze, neither of which materialized. He also had hoped for a more festive atmosphere onboard, perhaps with balloons and streamers or live video feeds from the other ships. Again, that didn't happen.

Other cruise guests looked forward to purchasing 50th birthday souvenirs, such as commemorative tumblers, T-shirts or shot glasses, but, possibly due to COVID-19-related supply chain issues, the availability of many of those items dwindled within mere hours of getting on board the ship.

The disappointment must have been noticeable as Carnival Breeze's cruise director Jonathan "Cookie" Adams later acknowledged it during an onboard Q&A, saying he wished that more could have been added to the celebrations. "I know y'all are a little hurt by that meet-up," he said. "We're just doing the best we can trying to come back from this pandemic." He reminisced about the line’s inaugural voyage that included free drinks for passengers -- an unlikely scenario nowadays.

As someone who had not cruised on Carnival before, being indoctrinated into this particular cruise line’s fan culture during a momentous celebration was eye-opening. I was impressed by the legions of cruise loyalists who loved Carnival so much they came readily prepared with theme outfits, hats, wigs and full red, white and blue three-piece suits. In some cases, Carnival fans went to great lengths to make or purchase non-licensed Carnival wear in order to dress the part.

For my next Carnival cruise, I’m going to have to pack a bit more into my suitcase.