You may also like
Dismiss
Best Shore Excursions in 30 Caribbean Cruise Ports
Windstar vs. Lindblad Expeditions-National Geographic in Costa Rica
Why Delfin Is the River Cruise Line for You
Exotic Norway: Why a Cruise Is the Best Way to Travel
11 Best Whale Watching Cruise Shore Excursions
Fall Foliage: Canada Cruise Ports to Visit This Autumn
8 Exhilarating Shore Excursions
Latter Day Saints (LDS) Book of Mormon Cruises
6 Best Cruise Ports for Hiking in the Caribbean
10 Best Beaches in Mexico for Cruisers 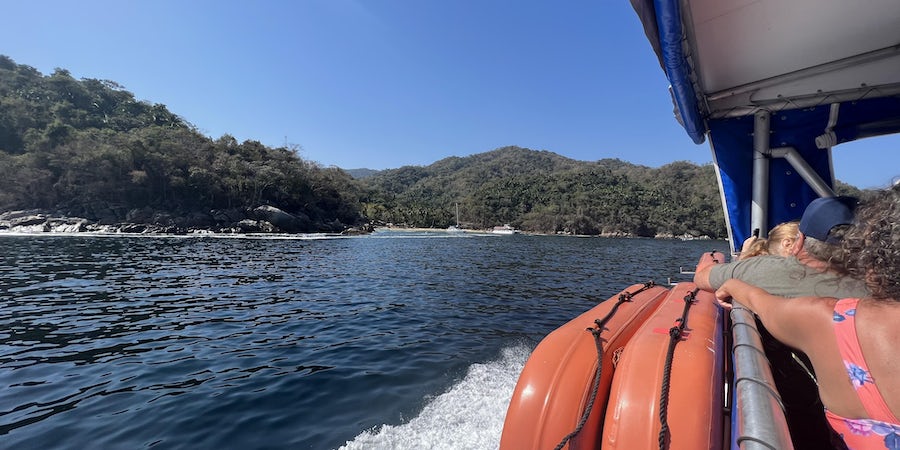 Whale Watching and Other Natural Shore Excursions in the Mexican Riviera: Just Back From Majestic Princess

While Majestic Princess as a cruise ship has plenty to offer on its own, the LA-based vessel also offers fantastic Mexican Riviera shore excursions.

During our seven-night cruise to Mexico, we were able to get off the ship in Cabo San Lucas, Mazatlan and Puerto Vallarta and experience a Mexico that went beyond the region's popular tequila tastings, Senor Frog's balloon hats and swimming with dolphins excursions.

Don't get us wrong, we love lazy days on beautiful beaches and a good margarita. But, as true nature and wildlife lovers at heart, we were excited to take advantage of the Majestic Princess shore excursion opportunities that would immerse us in a different type of wild-life in port -- the kind filled with migrating whales, waterfalls, birds, tropical fish and pods of dolphins.

Our tour met on the pier in Cabo, steps away from where the tender boat drops you off. After a less-than-five-minute walk to the marina, we boarded a double-decker catamaran, margaritas and rum punch were passed around and we took off.

All eyes were on the glittering water surrounding the boat. Within 10 minutes of departing the marina, a pod of dolphins dipped up and down in the water. We collectively squealed, cameras flew up into the air and then hung in waiting for the next sighting. Ten minutes later, people snagged photo opps as we passed the famous Arch of Cabo San Lucas.

Majestic Princess is a social ship. Repeat guests know each other and the crew, and people aren't shy when it comes to striking up a conversation. Yet, as we headed toward a popular whale watching spot, our boat remained silent. Again, all eyes were on the water. Cameras were posed and ready.

Just like many cruisers who travel to Mexico to escape cold temperatures, two species of west coast whales head south during winter. The waters off the coast of the Mexican Riviera host humpbacks and gray whales that migrate from the frigid waters of British Columbia, Alaska and Washington between mid-November through April.

Whale watching season in Cabo officially runs from December through April, with mid-December and mid-April offering practically guaranteed sightings. Along with these two gorgeous species of whales, cruisers often spot up to three different species of dolphins, including bottlenose dolphins, a bonus for cruisers who double as Flipper fans.

There's something about observing marine mammals in their own habitat that sticks with you. Maybe it's got something to do with the vastness of the ocean, the sheer size of these whales, or that the experience can't be replicated in a pool or at an aquarium, no matter how big. Or perhaps it's the fact that, in a single moment, you become acutely aware you are privy to something truly majestic (if you'll pardon the pun).

This is why when I was perusing the shore excursions available during my cruise, whale watching was an immediate must-do, even if I didn't have high expectations of actually seeing a whale during the excursion. Two hours just didn't seem long enough to get in any significant sightings.

Turns out, the chances on this shore excursion weren't slight.

It happened fast, in a blink. A humpback whale surfaced nose-up just about 150 feet in front of us. The entire catamaran gasped in awe -- it's practically impossible not to gasp in pure excitement at the sight of a flipper, a fin or, if you're lucky, a full breach.

Our guide came on the intercom and noted the whale's small size indicated it was a baby, likely learning to breach -- and at least one or both of its parents would be nearby. Newborn humpbacks are spotted in early January. By March, they've become full of energy and curiosity, and often put on shows as they learn the ropes of being a whale.

Between several failed attempts at a full breach, our baby whale's parents surfaced, waving their fins and throwing their tails up at us. The baby whale sometimes rolled on its back, exposing its lighter-colored belly, or sprayed water through its blowhole. The few minutes between each bout of activity, we all remained silent, in waiting. Each sighting brought with it a gasp or gleeful giggle, and for 30 minutes, there was nowhere else we'd rather be.

Eventually, we left our family of whales to seek out more whales before heading back to the marina, out of time. As a parting gift, a triplet pod of whales sprung up on the right side of the boat. On cue, we all gasped. This time, fewer cameras went up, and people just stood in the moment on our idling boat, watching the whales wave, dip up and down and swim alongside us through the sea.

Despite the sunny afternoon time slot, few people chose to take advantage of the free drinks, as if they were a distraction to the true entertainment. Besides, this shore excursion was one you wanted to remember.

Birding and Mangrove Tours in Mazatlan

The town of Mazatlan sticks out on a typical Mexican Riviera itinerary.  The wildlife and nature shore excursions here are fewer. Much of the shore excursions in Mazatlan are focused on the history, culture and sights of the town.

This makes Mazatlan a great port to break up the long outdoor tours. Short town tours -- which can include historical site highlights, hiking up to a lighthouse, polishing your salsa skill (both the sauce and the dance) and traipsing through town before you indulge in a ceviche-making class -- run around three hours on average.

However, for nature die-hards, those blessed with energy to burn or anyone who just loves birding, Majestic Princess offers an Estuary Cruise & Tropical Birds excursion along the protected mangroves of Teacapan Estuary, the largest wetland waterway in Mexico.

This leisurely four-mile trip to Bird Island is the prime opportunity for novice and experienced birders to spot native species -- with or without binoculars -- from brown pelicans to blue herons and even sea hawks. Even though this tour clocks in at six-and-a-half hours, much of the time is spent gliding through the estuary, learning about birds and checking out local shrimping and scalloping boats, and hanging out on the beach.

It's a relaxing eco-tour, led by a knowledgeable guide and is best taken in warmer weather due to the time spent on the water, outdoors and on the beach. Did we mention there's also a tractor-pulled wagon tour through the farmlands?

We love how this tour feeds the natural curiosity of participants and leaves everyone feeling like they experienced a different side of Mexico than you usually get to see. It's easy to see why it's the only Mazatlan shore excursion recommended by Animal Planet as part of Discovery at Sea, Princess Cruises' exclusive partnership with Discovery.

Puerto Vallarta is another port filled with shore excursion options around staged dolphin encounters, tequila tastings and beach getaways. It was also the only stop on the itinerary that offered snorkeling.

For us, it was a toss-up between the Snorkel at Marietas Islands with Lunch & Open Bar, or the Majahuitas Cove, Yelapa & Lunch excursion. Ultimately, in the end, the listed "hike through the jungle" to the Cola de Caballo waterfalls sealed the deal. Both tour descriptions include the possibility of whale and dolphin sightings during Puerto Vallarta's whale season (December through March).

We'll be the first to admit that this tour wasn't exactly as advertised -- though it does denote strenuous activity and it was not lying. This excursion is loved for its variety of activities, and participants should be able to swim for a sustained period and walk against an incline and decline.

Our first stop was Marieta Cove, a gorgeous but overall unremarkable dot of deep water below the dramatic rocky cliff line off a private beach. Snorkel gear was passed out and once we arrived at the cove, we jumped off the back of the catamaran in pairs. Thanks to a boat ahead of us that tossed in a bit of fish food, we were surrounded by fish.

The fish were not shy, but treading water in the chilly cove didn't last long for most people. Those who opted not to snorkel were taken on the catamaran over to the beach to chill out. However, the catamaran could only take us so far into the shore, and in order to get on the beach, you had to swim through the water toward land. Snorkelers swam through the ocean directly from the cove to the beach (or, some jumped aboard a small fishing boat to catch a lift).

The tour picked back up in Yelapa, where we headed after about an hour or so at the beach club. Again, we split into two groups; one group headed straight to the beach club, the other was transported to the pier where we embarked on a stone-paved walk through the small fishing village up toward a small waterfall. Along the way, we saw an iguana and a few stray cats, and got a peek at small village life.

We made our way back down through town, crossed a lagoon sandbar and had about thirty minutes to hang out on the small beach, ordering drinks and food from the local restaurant and chasing crabs on the rocks before boarding our catamaran.

As we headed back toward the ship, it would be easy to assume that the tour was over. We plied ourselves with free cocktails as we danced to music playing over the loudspeaker, scanning the water for dolphins as we sped by. At some point, I glanced over my shoulder and saw a handful of people wearing 80s hair metal outfits, and realizing they were our crew, I suddenly remembered the rave reviews for the catamaran crew entertainment.

Completely unexpected -- and hilariously entertaining -- the crew proceeded to perform incredibly well-rehearsed, lip-synced versions of popular 80s metal songs, including Aerosmith, AC/DC and Bon Jovi. It was like nothing we've ever witnessed on a shore excursion before, and probably never will again (unless we rebook this excursion, which is highly likely based solely on this wild catamaran karaoke show).

Oh, and while we didn't see any whales on this particular tour, a pod of dolphins paraded by our catamaran. Turns out, one tour can have it all.