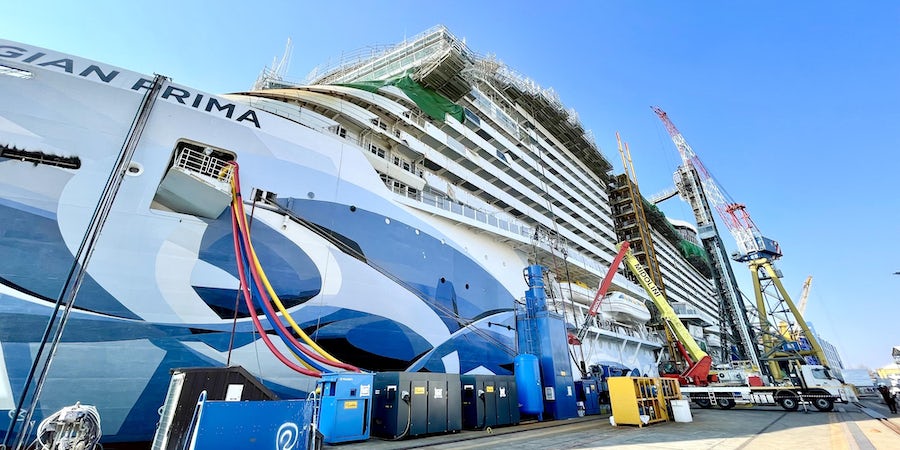 If Norwegian Cruise Line's new ship, Norwegian Prima, is anything like the lavish premier and shipyard event in Venice this week -- which included "A Taste of Prima", cocktails at Harry's Bar and a Gala Dinner -- then guests of the new ship are in for a real treat.

Scheduled for delivery on July 29, 2022, and making its debut in Southampton, U.K. on August 12, Norwegian Prima is the first of six new Prima class vessels NCL will launch between 2022 and 2027.

Identical twin Norwegian Viva, which is being built alongside Prima in the Fincantieri shipyard, is scheduled for launch in June next year.

Prima class is a shade smaller than the line's previous ship class, Breakaway, in terms of gross tonnage (142,500 vs 146,600) but has a significantly higher space ratio per guest.

How will it manage this?

This increase in the guest space ratio is just one aspect of how NCL is "elevating" the mainstream cruise experience -- food, entertainment and accommodation -- to provide guests with more of a luxury experience.

The ship and its class are the first to be designed under the current Norwegian Cruise Line Holdings chair, Frank Del Rio.

I was fortunate to be among a select group of journalists and travel agents to attend this shipyard event at the Fincantieri shipyard in Venice, Italy, along with the architects and designers of the ship and NCL executives.

It's hard to conceptualize this spaciousness when it's finished 14 weeks from now as we pick our way through steel and exposed wires, but with renderings and in-depth descriptions by Sarah Hall Smith, design director for NCL as well as a little imagination the ship starts to take shape in my mind.

Hull artist and Venetian-born street artist Peeta and sculptor garden creator, Alexander Krivosheiw, who were also with us on the tour, shared their vision in helping Norwegian Prima come to life.

Norwegian Prima and Norwegian Viva Will Be Smaller Than Breakaway Class

Rather than following the cruise line industry standard that bigger is better, NCL is going smaller with Prima class ships.

"Our goal is to be the premium brand in the contemporary market and our passion is to deliver an excellent product to guests," he said.

"We want them to feel blown away by the experience when they come away from Prima. This new class boasts a more spacious ship, offering guests more personal space. The passenger to crew ratio is also lower, providing better service and incredible guest experiences."

This four-year project is the first NCL ship designed by Lissoni & Partners, a Milan and New York-based design firm.

The "elevated" experience begins with your first glimpse of the impressive ship and Peeta's hull design of Prima.

In several shades of blues and white, it's not your typical kaleidoscope of colors usually found on NCL's other Breakaway, Breakaway Plus or Jewel class ships.

Peeta's inspiration for the hull was the waves and blue tones of the sea and the lagoons from his life spent on the water in Venice.

The Haven, the ship's "ship within a ship" exclusive key-card-access only area, has been relocated to the aft, where it will be more protected from the wind.

As well as being the largest onboard any of the NCL fleet, Norwegian Prima will have 13 suite categories, including the largest three-bedroom suites of any new cruise ship, NCL claims.

Private elevators rise directly into The Haven public areas on decks 16 and 17, which include The Haven Restaurant (pictured above), The Haven Lounge & Bar, a private sundeck, a new infinity pool overlooking the ship's wake and a new outdoor spa with a glass-walled sauna and cold room.

Artwork is an integral part of the ship, with NCL's first sculpture garden at sea, designed by Krivosheiw, The Concourse.

Norwegian Prima will feature a total of six installations designed by Krivosheiw featuring immersive art inspired by ancient mythology and contemporary abstract forms. The seven sculptures, valued at over $2 million, offer stunning effects that change as the sun sets.

Passengers will find that theme continues in the cabins with murals created by Atlanta-based artist Amy Rader.

Her inspiration was to take historical portraits of women and overlay them with natural elements -- butterflies, birds, minerals and corals," explained design director Sarah Hall Smith.

"She's layered these collaged images that represent joy, transformation and the emotions you get when you travel the world. Five of her unique images will rotate throughout the staterooms on the ship."

There are also fun sensory and touchless experiences throughout the ship for passengers to discover, Smith added.

Dining Will Also Be An Elevated Experience Onboard Norwegian Prima

As NCL revealed yesterday, dining is being completely rethought with new venues like Palomar, a Mediterranean-inspired fresh seafood restaurant.

The new main dining room, Hudson's, (which we found out is named after New York's river and Frank del Rio's favorite restaurant) will give guests 270 degrees of aft views.

Or you can dine around the world at the new Indulge Food Hall, which has 11 diverse eateries featuring everything from the barbecue at Q Texas Smokehouse, to Starbucks coffee, desserts at Coco's and the line's first Indian-inspired cuisine at Tamara.

Prima also has a sustainable bar program with renewable ingredients and biodynamic wines at Metropolitan Bar.

With Norwegian Prima scheduled to set sail this summer, we can't wait to see what the future looks like for NCL's new Prima class ships and to experience its elevated guest experience.