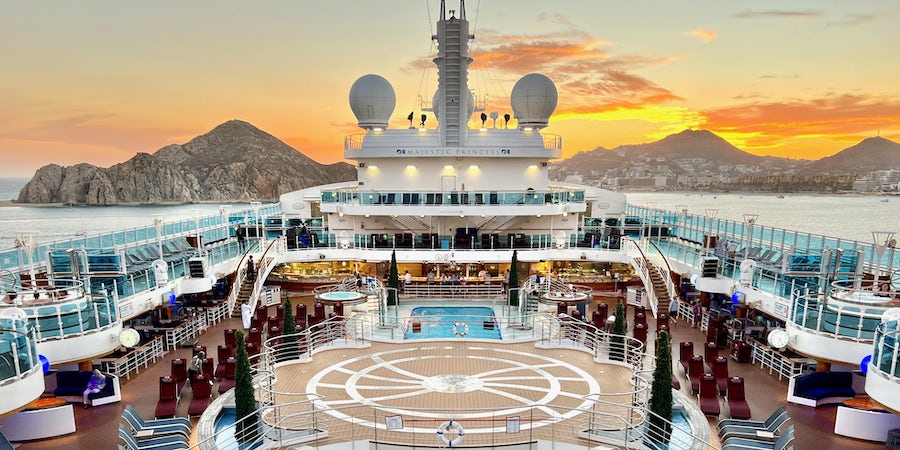 Live From Majestic Princess in Mexico: 6 Things We Love About This One-Of-A-Kind Cruise Ship

Majestic Princess may be the middle child of Princess Cruises’ Royal-class vessels, but this ship is a standout among its siblings. It's also unique from all other Princess ships. And we can't help but fall in love as we spend a week onboard one of Majestic Princess' Mexican Riviera cruise itineraries.

Originally meant to mirror Royal Princess and Regal Princess, the two ships that came before it, the Majestic Princess cruise ship was given a handful of major tweaks before it was launched 2017, operating specifically for the Chinese market with year-round sailings from Shanghai. Even though the ship was partially "tweaked back" when it moved ports to Australia and New Zealand, and eventually Los Angeles after the COVID-19 No Sail Order was lifted in 2021, Majestic Princess looks and feels noticeably different than its siblings.

Signage in both English and Chinese is probably the most obvious marker of its original post, though previous venue names, like the Five Leaves Tea Bar, Sing at Sea Karaoke and VIP Casino Lounge, are still etched into the Majestic Princess deck plans posted in the elevators. I can't help but wish some of these original venues were left intact, even though there is still enough onboard that makes Majestic Princess a one-of-a-kind experience, no matter where the ship sails.

Here are the top six things we love about Majestic Princess.

Tucked away behind the adults-only Hollywood Pool Club lies the Hollywood Conservatory, hidden in plain sight. This in-the-know area is not found on any other Princess ship, and is one of our absolute favorite spots onboard. Created as another feature specifically designed for the Asian market, the Conservatory is located at the very front of the ship on the Deck 17 Sun Deck. On other ships this area is outfitted as The Sanctuary, an outdoor, adults-only relaxation retreat.

On Majestic Princess, unlike on other Princess ships, this area is completely covered at all times, functioning more like a sunroom. It's usable even in windy, cold or rainy weather, when you're looking to laze "outdoors" but the forecast has other plans.

That said, bigger doesn't have to mean better -- make no mistake: The Enclave gets the job done. It's the perfect way to book-end a spa treatment, escape on a sea day or melt away after a particularly active excursion.

Double decks of heated tile loungers, a hydrotherapy pool with four stations, a collection of themed hot and cold aromatherapy showers, a steamy Roman caldarium, dry-heated Roman laconicum sauna and impressive Turkish hammam are all perfectly packed into the well-designed space.  The Enclave is part of the ship's Lotus Spa and can be booked by the day or through a pass valid for entry anytime during the cruise.

Another lucky remainder from the ship's original design for the Asian market is an expanded shopping promenade filled with an exceptional collection of high-end designer stores. We're talking Bvlgari, Salvatore Ferragamo, Cartier, Chanel, Chopard, Gucci, Prada and more. This level of luxury brand shopping is not available on any other Princess ship.

Shopping was such a focal point in the design of Majestic Princess that The Shops of Princess area ended up pushing-out the Fine Art Gallery, which is now located on Deck 6, and the Crooners bar (which was not rehomed). If you cruise to shop, Majestic Princess is the ultimate in luxury duty-free shopping at sea.  And don't worry, you'll also have a chance to shop at cruise ship duty-free shop staples such as EFFY, Clinique, TAG Hauer and others, too.

Everybody loves a little karaoke at sea, but Majestic Princess is the first (and only) Princess ship to take it to the next level with private onboard karaoke rooms. Dubbed Sing at Sea Karaoke, Majestic Princess has a dedicated space for five individual karaoke rooms on the starboard side of Deck 5 where guests can pay to sing their hearts out to a private audience.

Regrettably, these pay-by-the-hour Sing at Sea Karaoke private rooms are not available on U.S. sailings. These rooms are big money makers within the Asian market, but since Western cultures aren't as serious about their karaoke, the line repurposed the karaoke rooms once the ship moved west (COVID-19 physical distancing restrictions were also a factor in the decision to remove the rooms).

On our Majestic Princess Mexican Riviera cruise, the five individual karaoke rooms are currently being used as medi-spa, acupuncture and seminar rooms for the Lotus Spa. This is in addition to the Lotus Spa's 11 existing treatment rooms.

Since the bones of the rooms -- and the karaoke devices -- are still intact, rumor has it that they may make a reappearance if and when the ship makes its way back to the Asian market.

5. Harmony: An Asian Fusion Restaurant That Hits it Out of the Park

Majestic Princess is home to impressive specialty restaurants. On top of the Princess crowd favorite The Crown Grill steakhouse and Bistro Sur La Mer, a French restaurant by renowned chef Emmanuel Renaut, Majestic Princess guests are privy to one of the best (if not the best) Asian restaurants at sea, Harmony.

On Majestic Princess -- and Majestic Princess only -- Harmony takes the place of Sabatini's Italian Trattoria, offering guests the opportunity to dine from a menu made in partnership with chef Richard Chen, the former chef of Wing Lei, North America's first Chinese restaurant to receive a Michelin star.

For anyone expecting P.F. Chang's: this is not it. Harmony is a delicate dive into Chen's interpretation of traditional Chinese dishes. The menu during our sailing included a wide range of options, from more traditional versions of western favorites such as crab Rangoon, hot and sour soup and General Tso's Chicken to dishes perhaps less familiar to U.S. diners such as Sichuan chicken with century egg, braised pork belly with star anise and diced salty fish fried rice. The dessert menu made it hard to choose from with options like mango sago soup, red bean creme brulee and green tea cheesecake.

A meal at Harmony is an experience so nice that we've dined here twice (both times we've been onboard the ship).

6. Majestic Princess Doubles Down on Onboard Gambling

On Majestic Princess, the usual Club 6 dance club located off the Princess Casino was replaced with a VIP casino with an exclusive bar. This area was given a second makeover after leaving the Asian market and is now known as the Double Down Bar and is open to all cruisers -- and you'll only find it on Majestic Princess (on Royal ships preceding Majestic, it's Club 6; on those that debuted after Majestic -- Sky Princess, Enchanted Princess and Discovery Princess -- it's the Take Five jazz lounge).

During the day, the Double Down Bar serves as a chill meeting space for various onboard groups, and always has sports games playing across a wall of multiple mounted TV screens. This makes it an excellent spot to keep an eye on sports games you may have wagered on through the cruise line's new sports betting option.

Princess guests can now use the MedallionClass app to bet on live sports games via the app's new Ocean Sportsbook feature. From here, a list of the upcoming games in the active sports season will appear and wagering fans can customize and keep track of their bets. Guests on Majestic Princess then have the added bonus of being able to head over to the Double Down Bar to watch any games they've bet on that take place during their cruise. For us, that's a win-win.