You may also like
Dismiss
Royal Caribbean Cruise Line History
Your Guide to Labadee Cabanas
The Beach Club at Bimini: What You Can Expect From Virgin Voyages' Private Experience Ashore
Pictures of Norwegian Encore
10 Things You Should Never Do on a Cruise Line Private Island
5 Free Things to Do on Pacific Adventure
Pictures From the Turner Classic Movies (TCM) Cruise
10 Best Cruise Destinations for Hot Air Balloon Rides
Virtual Cruise Trip Report: Onboard a Cruise Critic Member's "Fake, Made Up and Completely Impossible" Cruise Itinerary
Cruise Beach Bars We Miss in the Caribbean 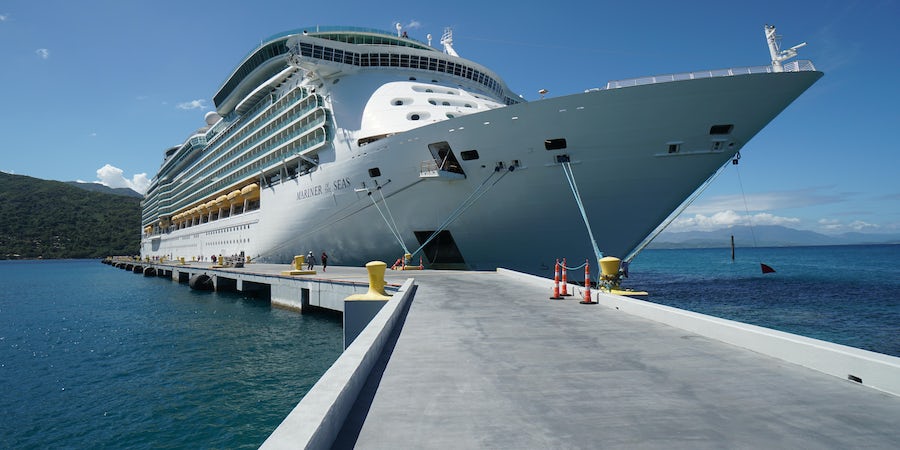 Why a 5-Night Royal Caribbean Private Island Cruise Is Just What You Need: Live from Mariner of the Seas

It's been a hard winter by any measure, with massive winter storms, cancelled holiday plans and omicron all wreaking havoc during the first months of the season. With that in mind, I'm currently wrapping up a five-night private island cruise aboard Royal Caribbean Mariner of the Seas.

Royal's Five-Night Eastern Caribbean & Perfect Day cruise is a great option for travelers looking to make up for lost winter-time getaways. The cruise departs from Port Canaveral, 40 minutes east of Orlando, and stops at Royal Caribbean's two private islands -- Perfect Day at CocoCay and Labadee, Haiti. Combined with Mariner's pools, hot tubs and expansive outdoor spaces, this short sailing is a great way to get a dose of Vitamin D and much-needed relaxation.

Better yet? Prices for this private-island itinerary are low -- even for balcony rooms -- and Royal Caribbean's drink package carries over to your time at Perfect Day and Labadee, upping the value of the voyage.

Why Pick a Private Island Itinerary?

Royal Caribbean's private island-only itineraries are a relatively new addition. They are likely to stick around for some time, however. This same itinerary is available throughout 2022 and is well liked by travelers on board.

The first benefit of this private island itinerary is the length of the sailing itself. Five days fits easily into busy work schedules and the itinerary offers a safe experience, as several guests told me. By sticking to Royal's own private islands, potential COVID-19 exposures in city-and-town ports are limited and security is high.

The biggest selling point for Mariner of the Seas' private island sailings is value, however. Samantha and Sean Gusler of Philadelphia have sailed with Royal Caribbean eight times. They told me that the value of the cruise couldn't be beat. Both noted that, unlike Carnival Cruise Lines, Royal Caribbean's drink package carrying over to the private islands was a massive plus. They also enjoyed the different atmospheres at Perfect Day and Labadee -- the former more like a theme park and the latter a laid-back beach destination.

Zack Uliasz, a grad student from Orlando, confirmed the Gusler's observations about Royal Caribbean's private island sailing. Nearly a Diamond Member at age 29, Uliasz has sailed with Royal Caribbean 11 times. This is his first sailing exclusively to Royal's two private islands, however.

"It seemed economical and safe during COVID," he told me. "The internet was necessary as I had to do homework and the drink package carries over." Even so, he also likes the broader offerings on longer sailings with more stops. "The missing elements is any sort of adventure or authentic cultural experience," he said.

Sun, Sea, and Slides at Royal Caribbean's Private Island in the Bahamas: Perfect Day at CocoCay

After a simple and smooth embarkation process in Port Canaveral, it was a short overnight trip to Perfect Day at CocoCay, Royal's most developed private island in the Bahamas. It's a sight to wake up to the blue waters that ring the island, even with stormy skies in nearly every direction. And, for me, the pull exerted by Perfect Day's towering waterslides was impossible to ignore.

Perfect Day has numerous experiences depending on your travel style, from those looking to party to families with kids to travelers looking to pamper themselves in a cabana. Even with Symphony of the Seas docked at the same time, COVID-era occupancy on both ships meant the entire island felt blissfully uncrowded. That fact aside, the swim-up pool bar was packed and bumping, and families beelined straight for Thrill Waterpark.

Lines for the waterslides were almost nonexistent, and families I spoke with couldn't believe how many times they were able to ride CocoCay's most popular slides -- especially the 135-foot-tall Devil's Peak, the tallest waterslide in North America. I was able to ride it three times, assured by kids half my size that I shouldn't be nervous. It's shockingly fast, with rollercoaster-level G forces, and might alone be worth the cost of admission. The price of entry -- like most of the on-land activities on Royal Caribbean's private islands -- was high (around $100 per person on my sailing; prices can vary drastically, so look for discounts during Royal's WOW sales).

The beaches were more tranquil than the pool, especially at Coco Beach Club. While there is a hefty extra charge for day passes to the beach club -- nearly $200 per person during my sailing  -- it might be worth it if you're looking to be spoiled. The menu features lobster and filet mignon, and waiters are everywhere zipping drinks across this perfectly manicured and landscaped haven. Coco Beach Club also has its own infinity pool and the only overwater cabanas offered by any cruise line in the Caribbean.

Beautiful Caribbean Beaches and an Adrenaline-Pumping Zip Line in Labadee

With the vibe of a private island despite technically being a peninsula, Labadee, Haiti, has greeted Royal Caribbean travelers since the mid '80s. It's an impossibly pretty spot and a picture-perfect sight to wake up to in the morning. Rugged green mountains rise directly from the sea, and small cove beaches blaze white against neon blue water.

Labadee is not Perfect Day -- know that before coming. It's a bit less polished and feels more like visiting a small beach village; the private port only recently reopened after two years without visitors. You'll hear Haitian vodou drumming even before you leave the ship, which perfectly sets the mood for the day.

There are plenty of activities on shore, but the Dragon's Breath zip line at Labadee is far and away the most popular. It's the longest overwater zip line in North America, stretching from atop a mountain just east of Labadee to Dragon's Rock at the other side of the bay (a half-mile journey). Whether or not the $99.99 price tag is worth it is up to you, though everyone in my group was happy with the adventure.

Extras aside, Labadee's beaches are the star of the show. There are numerous pretty coves, a packed floating bar, plenty of loungers and umbrellas (all free) as well as that drinks package that carries over right to your lounger (You'll pay a fee for more elaborate clamshells). There are also numerous short hiking trails that provide awesome views across the landscape.

Overall, Labadee provides a relaxed beach day with plenty of room for everyone to spread out. It has a bit more of a local vibe than Perfect Day, though you shouldn't expect the polished offerings like Coco Beach Club and Thrill Waterpark. For a laid-back beach day, though, it delivers.

Royal Caribbean's Five-Night Eastern Caribbean & Perfect Day cruise on Mariner of the Seas includes two full sea days. The offerings on the ship make these a pleasure, with kids sticking to the upper aft deck (near the FlowRider, waterslides, arcade, and kids' clubs) and the main pool area. Live reggae bands and upbeat music from a DJ keep the atmosphere lively, and drinks are in everyone's hands (or soft-serve frozen yogurt from Arctic Zone, also on the pool deck).

Food is universally great on the ship, though breakfast and dinner shine. Breakfast offerings at the buffet, Windjammer Marketplace, are incredibly varied and include an array of sweet and savory dishes for everyone (including vegetarians).

In the evening, the main dining room has a different menu every night as well as separate kids' and vegan menus. It's an elegant three-floor space and the service is attentive but not overbearing.

Jaime's Italian was far less crowded than Izumi, but you shouldn't pass it up. The pastas are handmade (and the stars of the show), while appetizers like truffle arancini make a great way to start the meals.

After dinner, the Star Lounge, Schooner's and the casino were far and away the most popular spots. Karaoke in Star Lounge was a riot, and Schooner's is packed for both piano music and trivia.

Don't miss the Love & Marriage game show, which was the surprising highlight of the offerings in Mariner's Royal Theater. It's a borderline interactive experience, with the audience belly laughing their way through the questions and answers given by contestants. During my sailing, the crowd couldn't get enough of the couple who had been married for 51 years, chanting "Dave! Dave! Dave! Dave!" and "Marilyn! Marilyn! Marilyn! Marilyn!" on countless occasions. And while the musical reviews weren't well attended, the ice show was sold out for every performance and my fellow cruisers couldn't stop raving about it (pro tip: Book as soon as possible).

Royal Caribbean's Mariner of the Seas isn't the newest ship in the fleet, but it's still beloved by both passengers and Royal Caribbean employees alike. Dining rooms, bars, performance venues and all public spaces still look fresh after a 2018 refurbishment and rooms -- while undeniably dated -- are in impeccable condition (and the beds are exceptionally comfortable).

Overall, everyone from the ship's crew to restaurant staff and guests seemed incredibly happy to be on board and sailing when the future for cruising is finally starting to look a little brighter. And for those who want their money's worth and a good time, this short private-island cruise is a great option.