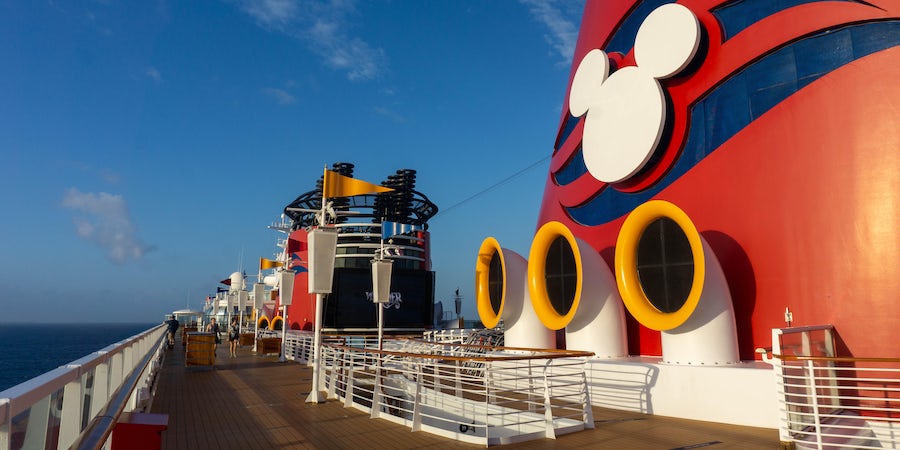 Live From A Disney Wonder Cruise From New Orleans to the Western Caribbean: Just What Mickey Ordered

A Disney Wonder Western Caribbean cruise from New Orleans is proving to be the perfect antidote to the long, hard road carved out by the COVID-19 pandemic.

On the cusp of the launch of the line's fifth new ship, the brand new Disney Wish (set to debut in July), Cruise Critic set out aboard Disney Cruise Line's second vessel for a quick four-day cruise from New Orleans to Cozumel, Mexico -- and found a cruise experience that has only improved since our last journey with Captain Mickey.

We embarked Disney Wonder in the Port of New Orleans on Valentine's Day. It was my first time in the Big Easy, and it made me wonder why it's taken me so long to sail from here. Though the variety of itineraries out of New Orleans isn't as great as those from Florida, the city's unique culture, food and drink scene makes it a destination in its own right. Staying here a few days pre-and-post cruise is highly recommended.

Arriving pierside, all passengers underwent rapid testing before being cleared to embark the vessel. The process required some patience -- Disney does not fully control this terminal as they do in Port Canaveral -- but everyone was trying their best to get people onboard as swiftly as possible. A computer glitch resulted in some confusion at the end of the gangway and made this last step challenging. Patience and understanding are still two things embarking passengers should always bring with them, especially during these COVID times.

Disney Wonder is nowhere near full, as the line is still operating under restricted capacity -- though families, couples and even solo travelers are well-represented here. Kids are still an important part of the Disney Cruise experience, and the folks that are onboard are lovers of Disney and Disney Cruise Line who are looking for a quick getaway to Mexico.

That's a bit of a bonus: all the perks of a Disney cruise with a fraction of the people onboard. There are no crowds in the ship's swimming pools, and lines for Mickey's Pool Slide are minimal. Deck chairs are plentiful, and seating in the theatre and public rooms is always available.

Eight months into the industry's restart, I still get caught by that. I rushed to Cabana's, Disney Wonder's casual buffet eatery, for a bit of lunch after embarkation. Of course, I didn't need to rush at all -- there were no lines to really speak of, and plenty of places to sit.

While ships will have to go back to full occupancy at some point in the future, now is not that point -- and it creates a very exclusive experience for those choosing to sail now.

Setting Sail from New Orleans On the Mississippi River

Disney Wonder was set to arrive in New Orleans in 2020, and then again in 2021. Disney Wonder has arrived back on the Mississippi this year, operating a short season of Caribbean cruises from New Orleans though February and March, along with additional sailings aboard Disney Magic in February, March and April 2023.

The ship is perfectly suited to sail from the Crescent City, thanks to a number of subsequent refits performed on Disney Wonder in 2016 and 2019 that have added touches of New Orleans and Louisiana to the ship, from the Southern-inspired Tiana's Place restaurant to the newer French Quarter Lounge.

Departure from New Orleans was memorable, too, as Disney Wonder made its way along the Mississippi River, not entering the open Gulf of Mexico until after midnight. We passed factories and freighters, riverboats and trains, ship-spotters and quiet residential areas. Sharp curves in the river could be felt as Disney Wonder heeled over perceptibly, swaying gently with each course correction.

Onboard, the evening quietly progressed in the way all cruises do: pre-dinner drinks and entertainment gave way to dinner, then after-dinner cocktails. Socializing, live performances, and live music were on the menu once again after being gone from our collective society for so long.  And though there are precautions still in place for COVID-19 -- including physical distancing requirements, mandatory mask usage, capacity limits and full vaccination mandates -- the thrill of departure, of being at sea, of simply being onboard, are alive and well.

The New and Improved Disney Wonder

It's clear Disney has taken great care of Disney Wonder during the shutdown caused by COVID-19. The ship -- originally launched in 1999 -- looks every bit like a brand-new vessel. You won't find banged-up furniture or frayed carpeting here; everything looks as if it was brought onboard just yesterday.

Those who haven't sailed Disney Wonder in several years will find some significant changes throughout, while those who have never set foot aboard the ship will find plenty of diversions to love.

In the fall of 2019, just before the industry shutdown, Disney transformed the former Promenade Lounge on Deck 3 midships into The French Quarter Lounge; a reimagined space that honours New Orleans' iconic French Quarter as well as the classic Disney film, The Princess and the Frog.

Flanked by oversized porthole windows running along the portside corridor leading back to Tiana's Restaurant, aft, the French Quarter Lounge has been my go-to spot onboard. There's New Orleans-themed cocktails, live music -- even a full-sized streetcar replica at the aft end of the room.

Also refitted during the 2019 drydock is the adults-only Cove Café, tucked away on the port side of Deck 9, just outside the midships elevator lobby. This caffeinated hideaway was completely redesigned and now sports contemporary yet fun décor along with great ocean views. At night, coffee gives way to vintage whiskies. It may be the most underrated space onboard Disney Wonder; a place for adults to just get away from it all.

This is one of the things that Disney does right, every time: it caters to adults every bit as well as it caters to its youngest passengers.  You don't need to have kids to appreciate sailing aboard a Disney ship, and you don't even need to be a Disney fanatic to have a good time. What could be an "in-your face" experience is instead delivered with deft subtlety.

Make no mistake about it -- despite being a family friendly cruise, this is a thoroughly premium experience that has more in common with a luxury line than one might think. Just venture over to the adults-only Cadillac Lounge to dispel any notion of Disney as being only for kids -- a collection of vintage bourbons and cognacs is on offer, including the exquisite Pappy Van Winkle 25 year -- for $350 per ounce.

It's all about the details: stateroom towels have the Disney Cruise Line logo embossed into them. Toiletries are uber-premium; I'd forgotten how much I love the line's H20+ products -- so much so that I may have bought some from the gift shop to take home with me.

Even the in-room laundry bag is embroidered with the Disney Cruise Line logo; it's the first laundry bag I've ever looked at and said, 'Wow - that's cool!'

Then, there's the "Hidden Mickeys" sprinkled liberally throughout the ship that heighten the sense of discovery and adventure onboard. Every detail has a purpose, and none are accidental.

When Disney Cruise Line constructed Disney Wonder and its sister, Disney Magic, in the late 1990's, Disney channeled the classic ocean liners of days gone by, and plenty of those nautical touches are present aboard Disney Wonder in a way that instead honours that maritime tradition rather than trying to accurately recreate it. The ship's Art Nouveau interiors still sparkle; walking into Palo -- the superb adults-only dining venue located on Deck 10 aft -- channels thoughts of Cunard's classic 1940's duo, RMS Queen Elizabeth and RMS Queen Mary, with their abundant veneered wood panelling and curved surfaces.

You don't need to be a crazy maritime nerd like me, either, to appreciate it. It's all part of the overall feel here onboard Disney Wonder that makes this experience so special and so unmistakably Disney.

The Magic Is Still Here

For me, the most poignant moment of this voyage so far occurred during about an hour after our departure from New Orleans.

A character "Meet and Wave" -- the new physically-distanced version of Disney's traditional character meet and greets -- was occurring in the Atrium on Deck 4. I sat and watched for a while as kids came up to have their photos taken with Rapunzel, while a pianist played live music from a piano located somewhere in the atrium lobby below.

At one point, there was no longer a queue of kids waiting to greet Rapunzel. So, in the light of the setting sun, she began to dance to the music, there in the atrium, by herself. Never breaking character once, merged completely with the very real crewmember playing her, dancing for herself and the few passengers passing by in the fading light of day.

Suddenly, a small girl came rushing into the atrium and burst out, "It's Rapunzel! Mommy, it's Rapunzel!" Rapunzel looked down and waved at the girl, who burst into the most genuine smile I've ever seen.

Cruising brings me joy, and Disney is all about joy, whether that's on the silver screen or here on the deep blue sea.

That's magic -- and a COVID-19 pandemic can't change that.