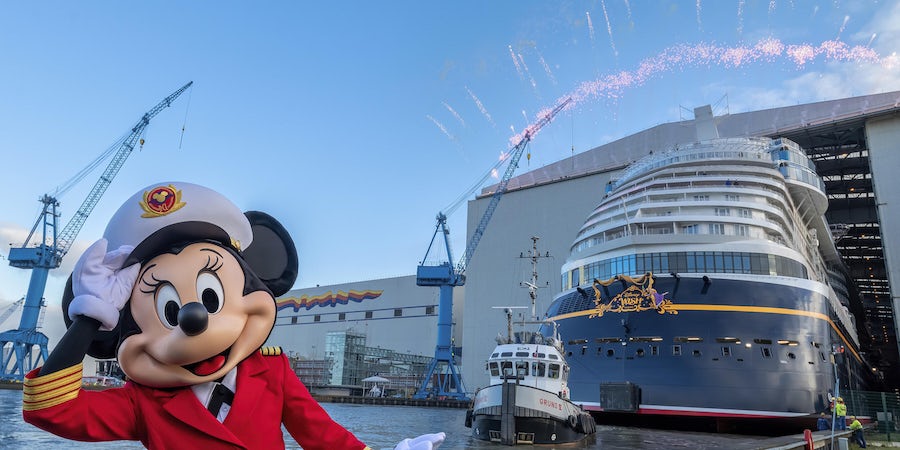 Disney Wish made its float out February 11 from the Meyer Werft shipyard in Papenburg, Germany, marking the first new ship from Disney Cruise Line in a decade.

The 4,000-passenger ship will make its debut in July 2022, a date moved back from early June as the German shipyard copes with COVID-19-related issues. Such launch date changes were common even before the pandemic, as construction timelines are often adjusted.

After talking with the top creative brains on the Walt Disney Imagineers team, Cruise Critic is convinced that Disney Wish is worth the wait. Here are some of the top reasons why.

All Disney cruise ships set the stage for a magical vacation right from the start. As you board, the crew greet you by name and thundering round of applause as you enter the ship's dramatic, multistory atrium. But onboard Disney Wish, the excitement is even more amped, as the Grand Hall (the atrium) has been designed to mimic Cinderella's castle.

"All of the spaces on the ship are designed under this idea of creating an enchanted environment for our guests," said Claire Weiss, interior design principal at Walt Disney Imagineering. "And that plays out in many different ways, especially in the Grand Hall, our main gathering space on Deck 3 that is an ode and tribute to the beauty that is the film, Cinderella.

"It is essentially a fairy tale at sea."

Beds in the Cabins Will Boast Large Disney Murals

Disney's cruise ships have long won praise for their innovative cabin design, where the bathroom is split into two separate compartments to to give families more space and privacy. A baby or toddler can be given a bath in one part of the bathroom, while leaving a toilet available for other family members to use.

Practical, yes. Magical? Debatable. What will really draw attention from cruisers on Disney Wish will be the new mural headboards that will anchor the beds and make the Disney vibe part of the actual room.

"Depending on what room you get magically assigned, you will have a tribute to Cinderella or a tribute to Tiana," Weiss said. "And when I say tribute, it's really the design of the room. The headboard itself is actually a large full-scale mural of different Disney films. So, we are taking you to this enchanted environment, even in your stateroom."

The AquaMouse Attraction is Inspired By Disney's Films

When Disney's Imagineers bring their creativity to the line's cruise ships, they are always looking to tell a story --  and storyboard the experience like a film.

Where you'll notice this on Disney Wish is in the AquaMouse, what Disney is calling its "first attraction at sea." The 760-foot water slide wraps around the top deck of the ship and will take guests through tubes that have animation, special lighting and other effects for an overall experience that is similar to something you'd find at a Disney park on land.

Two original shows are planned for the AquaMouse. "Scuba Scramble" is inspired by "The Wonderful World of Mickey Mouse" shorts. The second, "Swiss Meltdown," takes cues from an Emmy Award-winning short "Yodelberg." Disney fans will spot Disney Easter eggs throughout both shows.

"We looked at the story and the environment and the experience," said Diego Parras, communications manager for Walt Disney Imagineering. "We start with story beats, much like you would tell in a film. And then we work with our design team and engineers to make it possible."

New Bars Include 'The Bayou' For Live Music

What the Imagineers team aims to do onboard Disney Wish is to evoke emotion within the ship's onboard venues. One place where cruisers will find this is The Bayou, a bar and lounge area inspired by the Louisiana setting of "The Princess and the Frog."

"We are celebrating Tiana as a character in many wonderful ways, but this is the magic of the environment," Weiss said. "The Bayou is just one space in that film, but it’s so imbued with magic."

The way that plays out in the lounge is that guests will sit under a canopy of southern magnolia blossoms and Spanish moss, with fireflies flickering around, Weiss said.

"We want to bring you into a space without having to tell you a linear story," Weiss said. "This is a space that’s for families but also adults. We want to provide spaces that adults can love too, that feel refined and special and not necessarily for children."

Another example of a space that will draw oohs and ahhs from all ages is the Star Wars: Hyperspace Lounge, an all-new new concept for Disney Wish. While Disney Cruise Line has leaned into the Stars Wars franchise with Star Wars Day at Sea and related features in the kid's club, this is the first standalone Star Wars venue on any Disney ship.

For Star Wars geeks, the lounge is inspired by the elegant and upscale ships like Dryden Vos’ in "Solo: A Star Wars Story" or Canto Bight’’s casinos in "Star Wars: The Last Jedi." There will be plenty of special effects that immerse the guests into the Star Wars world.

The Lounge is open to all guests, including families and children, during the day and turns into an adult-only venue at night.

"You will sit and enjoy incredibly wonderful cocktails from around the galaxy as you peer out a large window into space," Weiss said. "And you’ll see TIE fighters fly by and you’ll see planets and recognize exactly what you’re seeing from your childhood and teenage years.

"What’s so fantastic about Star Wars is everyone has a connection to it in some way."

The Marvel Universe Is Also Built Into Disney Wish

Let's not forget about Marvel, another Disney acquisition since the line's last cruise ships were built. On Disney Wish, the Avengers are put front and center with a new restaurant experience, Worlds of Marvel.

The restaurant is considered a "cinematic dining adventure" and will be one stop in Disney Cruise Line's unique "rotational dining" concept, where passengers dine in different venues each night, accompanied by with their waiters and servers.

"If you think of Marvel, you might not think of 'enchantment', but Marvel is an enchanting canon of stories," Weiss said. "We are not limited to just what we would call classic fairy tales. We are able to share a broad variety of stories with our guests."

In summary, cruisers can expect Disney Wish to bring Disney's same trademark pixie dust you’d expect -- and then some.

"Disney storytelling in the physical element is that every day is making the impossible possible," Weiss said. "Our job is to find the story, find the emotion and the place we want to take you -- and then we figure out how to make it real.

"What we have onboard is this wonderful spirit of making the impossible come to life."