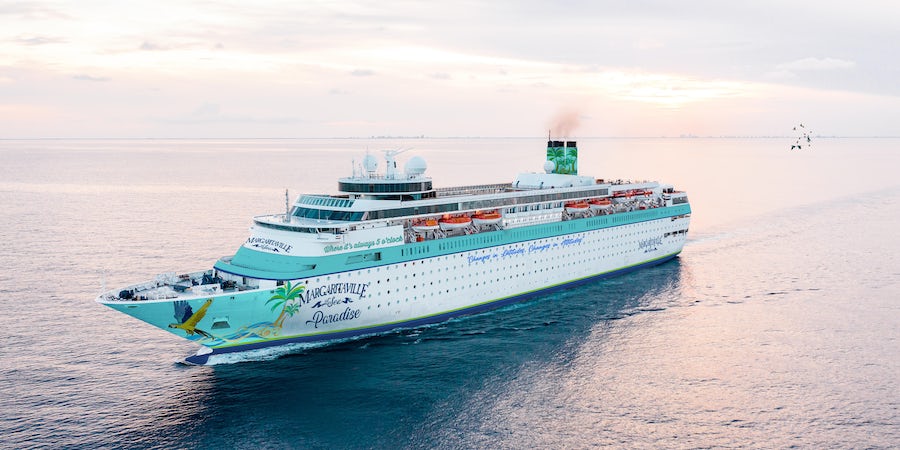 If you love all things Jimmy Buffett and the Margaritaville resorts, then you already know what you'll be getting with the new Margaritaville at Sea cruise line -- tropical fun that doesn't take itself too seriously.

That's what the executives of the line, which debuts in late April, are promising. "We know Margaritaville (resort) customers love live entertainment, we know they're foodies," Francis Riley, Margaritaville at Sea's chief commercial officer, said in an exclusive interview with Cruise Critic. "We know they enjoy parties and fun ships, and that's exactly what we will be providing them.

That doesn't mean the vessel will be the same, however. Passengers can expect a complete refit when Margaritaville at Sea Paradise debuts in April, said Riley, who was the former COO at BPCL. (Former Bahamas Paradise Cruise Line CEO Oneil Khosa will keep his same position at Margaritaville at Sea).

"Everything is going to be refreshed," Riley said. Cabins will have a totally new look that represents the Margaritaville brand and removes the old decor that dates to the ship's days of service for Costa, which launched it in 1991.

The ship's public spaces, too, are going to be redone and rebranded. The current ship's Rock Bar will be renamed the 5 O'Clock Somewhere bar after the insanely popular Jimmy Buffett song and completely overhauled, Riley said. There will be Sunset Bar and the Euphoria Lounge and a Landshark Sports Bar. The onboard casino is being cleverly renamed Par-A-Dice.

It's a refit that will breathe new life into a classic vessel and provide a exciting, tongue-in-cheek oceangoing experience full of Margaritaville fun at the same time.

Yes, the Margaritaville at Sea Menu Will Have Cheeseburgers In Paradise

Parrotheads -- the name given to Jimmy Buffett fans -- will also be thrilled to know that there will be cheeseburgers on the menus of Margaritaville at Sea Paradise. (Another one of Buffett's classic hits is an ode to burgers and what's on them).

"There will be lots of cheeseburgers," Riley said. "And obviously lots of opportunities for people to participate in the frozen drinks and the margaritas. All of the things that have been synonymous and famous for Margaritaville will be very much onboard the ship."

Other planned restaurants include the JWB Prime Steak & Seafood (named for Buffett's initials) and Frank and Lola's Pizzeria, a couple mentioned in another Buffett song.

The buffet is being renamed "Port of Indecision," and there will be a Margaritaville-themed coffee and pastry shop onboard to round out the food and beverage options.

One thing that will be amped up aboard the rebranded Margaritaville at Sea Paradise will be the live entertainment in the renamed Stars on the Water theater, Khosa said.

"We are investing a lot of money in audio and video," he said. "Jimmy is all about music and entertainment. I think this is a legacy project for him."

Buffett personally toured the ship before the partnership was announced, Khosa said. "He wanted to go down to the engine room, he wanted to meet the crew. He started developing plans as we were walking through. And he was enamored with our theater, and that is what gave him the motivation and inspiration to write a new show."

Buffett is no stranger to writing musicals. His show, Escape to Margaritaville, appeared on Broadway in 2018 and featured his greatest hits.

"There is such a level of involvement from him and the brand itself, the end product is going to be something very nice," Khosa said.

What won't change for Margaritaville at Sea are the two-day cruises from Palm Beach to Freeport on Grand Bahama Island that were the bread-and-butter of the Bahamas Paradise itinerary lineup. But the Margaritaville experience will be continued on land, the executives said, from the terminal in Palm Beach to the shore excursions in Freeport.

While the branding obviously sets a tropical and fun tone for the cruises, there's an underlying safety precaution that comes from running most aspects of the trip through the company, Khosa said.

"A cruise consumer who is sailing with us will always be in the Margaritaville zone from the time they enter the cruise terminal in Palm Beach until the time they get off," he said. "Especially in today's world, when we are coming out of this COVID-19 scare, it creates a bubble because the infrastructure is totally controlled by us."

Expect to find new features too, Riley said, such as a dedicated valet service in Palm Beach that will make embarkation easier. "Because we have that exclusive terminal on the West Palm Beach Side and the Freeport side, it will be a much smoother embarkation and disembarkation process," he said. "We're making it a great way for customers to come away for a short two-night weekend or midweek break.

Margaritaville Resort and Cruise Packages Will Be Developed

Bahamas Paradise Cruise Line had well-developed cruise and hotel packages with resorts on Grand Bahama Island. Those will continue, the executives said, with even more choices on the U.S. side through the popular Margaritaville resorts.

Margaritaville has resorts in Hollywood Beach, Florida as well as Orlando, which are the closest to Palm Beach, Riley said. The average customer at a Margaritaville resort stays between three and four days -- so adding a short cruise to the vacation makes a lot of sense, he said.

"There are properties across Florida and in other states as well," he said. "The combination of that, with the extension of a two-night cruise is going to be very exciting."

The entire cruise industry should be excited about Margaritaville at Sea, the executives said, as the line now has the potential to draw in lots of new people who have never cruised before.

Jimmy Buffett has a huge, branded platform that not only includes his Margaritaville resorts and restaurants, but also live concerts and a SiriusXM radio station. There are even Latitude Margaritaville retirement communities.

Margaritaville at Sea will be able to tap into that large fan base of customers who typically spend more money than other travelers, based on research from Margaritaville resorts, Riley said.

"They tend to take more than one vacation a year. These customers are constant travelers, which is music to the ears of travel advisors and the travel community at large."

Because travel has been so limited during the COVID-19 pandemic, Margaritaville at Sea is expecting to capitalize on the pent-up demand from this audience, Riley said.

Margaritaville at Sea is a Party, But Families Are Welcome, Too

While the name of the new cruise line evokes a party vibe, the Margaritaville resorts do take kids, the executives said; close to 20 percent of resort customers are under 18.

"We would be looking to mimic that," Riley said of the new Margaritaville at Sea. "There will be the kids' clubs and all of that available onboard."

Still, with the rebrand, expect the frozen cocktail lifestyle to always be close at hand. "We'll continue to offer drink packages, dining packages that we do today, but maybe they look slightly different," Riley said.

"The typical Margaritaville customer is somebody that would experience or has experienced an all-inclusive resort. So, we are well placed with what we have.

"What we will be obviously catering to is the demographic of a Margaritaville (resort) customer."