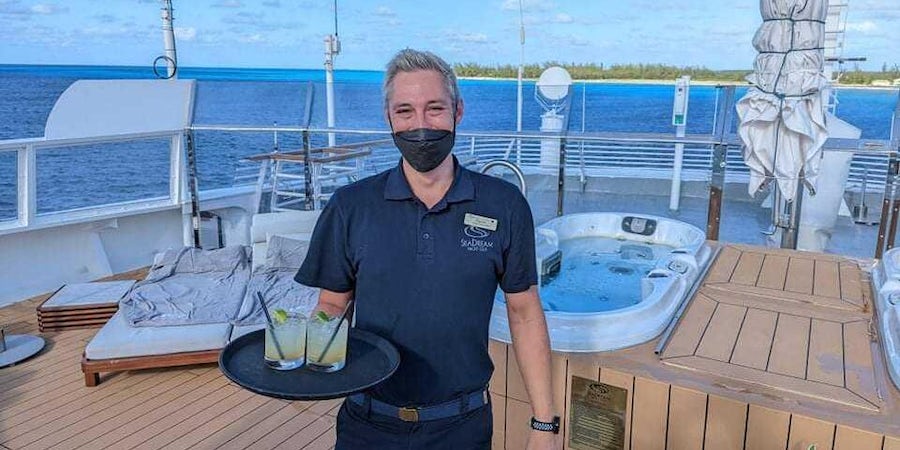 Taking the Cruise We All Need Right Now: Live From SeaDream II

Me too. In fact, the whole Cruise Critic team is. After an optimistic stretch in travel to end 2021, rising cases and this new variant to start 2022 had us wondering whether it was safe to cruise right now, if we were simply mired in this period indefinitely.

So, we did what any passionate and (vaccinated, boosted) cruiser would do: We booked cruises.

In fact, in the coming weeks, you'll hear from everyone on the team, eager to sail on cruise lines of all sizes and styles, and share our experiences with you. (Check out our coverage from the newly renovated Carnival Radiance.) We'll show you that why we believe that it's safe to cruise right now, with the precautions that the cruise lines have put in place, and that cruising remains one of the most fun vacations you can take, especially in these cold winter months.

Now it's my turn, and I'm literally writing this from the sun deck on SeaDream II, the 112-passenger small luxury cruise ship from SeaDream Yacht Club, currently sailing a weeklong itinerary around the Bahamas.

Spoiler alert: This is exactly the tonic I needed, a sentiment echoed by many of the roughly 65 guests onboard who were the craving sunshine and simply a break. Here's what it's like onboard SeaDream II.

Is It Safe to Cruise Right Now? Everyone Onboard Is Vaccinated and Tested

I made a conscious decision to spend the past month -- as omicron raged -- at home, as I've been spending more time with my parents who are in their mid-70s and I don't want to potentially spread COVID to them.

So getting out onto a ship came with a renewed appreciation for precautions. Everyone onboard SeaDream II is vaccinated, and masks are worn in all indoor public spaces, so there is a higher level of comfort on this cruise than I've felt even going to the grocery store at home.

All passengers had to have either a PCR test, taken within three days of sailing, or an antigen, taken within 24 hours, before they could even board the ship. Once we reached the port, everyone was required to take an additional onsite rapid test. (We saw one guest denied embarkation because he tested positive at the port, which certainly was a disappointment for him but demonstrated that the testing was working.)

Service on This Small Luxury Ship is Exceptional

I think I've forgotten how to relax, which is weird, considering I sailed on 10 cruises between April and November 2021. But somehow the cold winter weather and monotony of December and January had my stress high and my restlessness even higher.

In my head, that was going to change the second I got onboard SeaDream II, but the reality is, it took me a little longer to get into the flow. I grabbed that welcome glass of Champagne with gusto, but it took time to shake off the worry of the real world.

Frank, a sommelier who has worked for SeaDream Yacht Club for almost two decades, turned it around for me. The friendly Hungarian met us with a smile and an offer of a ship tour to help us get our bearings. He delivered drinks and half-joked that even though he's from Hungary, his home is truly onboard SeaDream's yachts. He clearly loves what he's doing, especially when that means interacting with guests.

We'd soon learn that Frank was just the first dose of friendliness we'd find onboard SeaDream II, where the crew know you by name before you even set foot on the ship. Perhaps it comes from the fact that they have an unwritten rule: Never say no to the guest.

That translates into an empowered staff who look for ways to make something happen rather than reasons not to. We had boarded late and missed lunch, so we decided to order room service without even seeing a menu. We guessed (correctly) that we could get a burger and were thrilled as the voice on the other end of the line helped us put together a full meal that was delivered to our stateroom quickly. We found out later that we could have had that meal delivered poolside. Or to the bar. Or anywhere else we wanted to eat.

In the days that have followed, we've met more of the crew and have yet to be disappointed. At mealtime, suggestions come quickly, and they have adapted as the waitstaff has gotten to know our tastes. I like my food spicier than most folks do, and I've learned I just have to ask for a little extra heat, especially with the excellent Indian cuisine they have on offer.

After several months at home, where the closest I've come to any kind of service has been the Amazon delivery guy, this level of pampering has been a dream.

Working from home, I've had no reason to dress up -- or even change out of my pajamas, if I'm being honest. So, I wasn't sure I was ready for a luxury cruise experience that meant dressing for dinner -- something I typically love about cruising.

Yet SeaDream II is more like yachting than cruising, a concept the company leans into heavily, so the approach to luxury is casual. For dinner, I've loved seeing the sundresses and chic outfits the women are wearing; for men, there isn't a tie in sight.

Even though the ship is small, the spa and fitness center are excellent, and I booked a Thai massage that honestly was one of the best massages I've ever had. This was a true indulgence, combining some Western techniques with traditional Thai practices that involve stretching and pulling. I came away feeling like a pliable puddle, months of tension erased by a tiny massage therapist with the hand strength of Superman.

The best part is, the ship and approach to the yachty experience means we spend time outdoors as much as possible. Even with cooler temperatures, it's still been a treat to enjoy some sunshine and remember why cruising to warmer climates is such a joy, especially this time of year. With spring break on the horizon, a Caribbean or Bahamas cruise on a luxury ship offers the perfect indulgence.

SeaDream II is Social, and Wow! Did We Miss That

In addition to the friendly crew, we've been really taken with our fellow guests, who come from all over the world (we've met people from Sweden, Norway and the U.K.), though predominantly North America. From the first day forward, it was clear this is a group who loves late nights and is OK sleeping in. I'm told that's pretty much the norm when it comes to any sailing. (Breakfast each day doesn't even start till 8 a.m.)

We've chatted barside with people who are longtime SeaDream fans, and we've met people who are trying out the brand for the first time. We've met people who have had to postpone cruise after cruise because of the pandemic, and even a couple who had just gotten over a holiday bout of COVID. The commonality was that everyone was really looking for a getaway that allowed them to get away.

Not Everything is Perfect, and That's OK

Cruise Critic has been saying it for months now: The key to cruising during the pandemic is being flexible. That was quickly put to the test on SeaDream II, when, on our first night, we received notice that the Turks and Caicos portion of our trip was canceled because of local government ordinances. Instead, we'd be adding additional stops in the Bahamas. While I've been lucky enough to have visited the Bahamas many times, the swap was A-OK with me, as we added some tiny spots -- San Salvador, for example -- that we'd never seen before.

The weather has hovered around the low-70s Fahrenheit, cool for the Bahamas but a whole lot better than the current weather at home in Denver. Or along the East Coast, where snow is being measured in feet rather than inches. It's also been particularly breezy, which meant a visit to Salt Cay (by tender boat) was replaced by a docking in nearby Nassau. Yet guests didn't bat an eye, some opting to walk around Nassau, others choosing to stay onboard and take advantage of the sun and bar service.

Truth be told, for many of us, the ports are secondary to the "just getting away" experience. (Our stop at Gordon's Beach for SeaDream's famous beach party, which includes caviar in the surf, has been switched to later in the week to try to get some better weather with calmer seas.) The ship's marina has yet to open for swimming or using the water toys.

That wind has also meant dinner has been enjoyed inside, rather than on the top deck as is the preferred style for SeaDream. (Breakfast and lunch, which relies on the buffet, are always outdoor experiences, but the shifting ship and cool temps mean the more formal plated dinner experience is harder to do outside.)

Even though the whole passenger group is dining indoors in the evening, SeaDream has opened the sheltered part of Deck 4 to guests who make reservations there for dinner. The outdoor heaters and soft blankets, plus excellent service, made this a must for us. We had a fantastic experience and can't wait to do again.

Bottom Line: It's a Joy To Return to Cruising

At Cruise Critic, we've routinely surveyed you, our readers, on how you're feeling about cruising. Recently, 88% of you who cruised during the pandemic told us you rated your cruise highly and would absolutely return to sailing again under the same circumstances.

After sailing on SeaDream II, where the relief and relaxation for everyone onboard are palpable, we're pretty sure you can count the guests on our sailing as part of that group. Cruising is just the salve we need to cure these winter doldrums.