You may also like
Dismiss
Mega-Chart: Compare Hurricane Sandy Cruise Line Compensation
Oceania vs. Crystal Cruises
Monaco Grand Prix Cruise Tips
23 Things Cruisers Love to Complain About
50 Years of First Royal Caribbean Cruises
6 Cruise Memories That Will Warm Your Heart
Cruise Critic Members Shout Out a Few of Their Favorite Crew
Will I Have to 'Social Distance' on My Next Cruise?
Your Favorite Cruise Ship is For Sale? Here's Why You Shouldn't Panic
Virtual Cruise Trip Report: Onboard a Cruise Critic Member's "Fake, Made Up and Completely Impossible" Cruise Itinerary 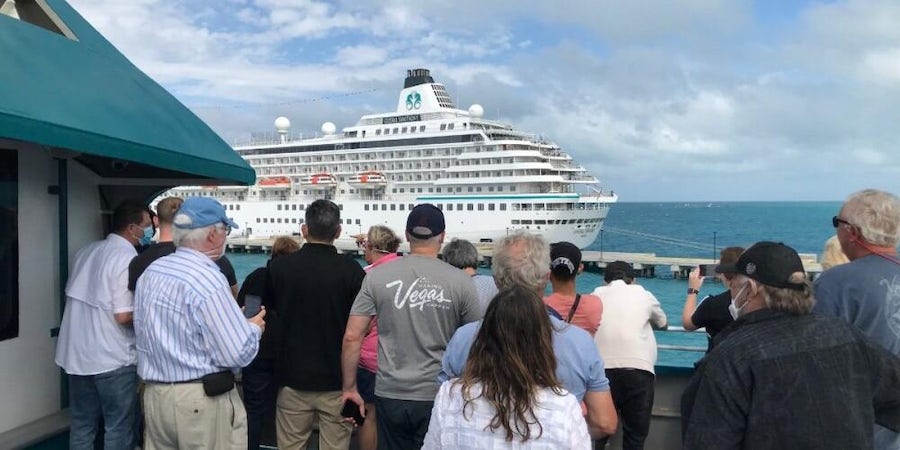 Crystal Symphony: Here's What It Was Really Like Onboard 'The Pirate Ship' Cruise

What happens after a cruise line such as beloved luxury operator Crystal Cruises suspends operations? Anything is possible, as Cruise Critic members found out when their ship, Crystal Symphony, abruptly changed course this weekend to avoid seizure in the U.S.

Rather than return January 22 to Miami as scheduled, Crystal Symphony diverted to Bimini in The Bahamas on January 23. Passengers were then placed on a ferry back to Fort Lauderdale, where they could return home on rescheduled flights.

In threads on the Cruise Critic message boards, passengers on the ship documented the entire process, from receiving the news that their cruise -- a seven-night Caribbean sailing that embarked January 15 in San Juan -- was the last one for Crystal Symphony to the barrage of headlines on the ship's final docking.

Far from being "kidnapped," Cruise Critic members reported final days on Crystal Symphony filled with decadent meals, complimentary drinks and assistance in getting home. The luxury was accompanied by sadness, both for the crew who were losing their jobs and for the demise of a cruise line that has created so many good memories.

Here are some of the highlights.

Cruise Critic member DaveyWavey, a British passenger, boarded Crystal Symphony on January 8 for a back-to-back cruise. His Live From posts on the Cruise Critic message boards showcased the luxury meals that Crystal Cruises has been known for, as well as various port stops along the way.

As is typical with cruises these past few weeks, COVID-19 and omicron were generally in the background. A stop in St. Thomas was canceled because of cases onboard, reported another member Texas Tillie.

Another sign of cruising right now: Lower capacity. While she didn't have an official tally, Texas Tillie said she heard that the ship, which can carry 848 passengers, had about 300 to 350 guests onboard. That allowed her to use the last of her Future Cruise Credit to upgrade to a suite -- which ended up being a smart move, considering that the line has stopped sailing.

The passengers received word that Crystal Symphony was diverting to The Bahamas on Friday night. A detailed letter placed in the cabins outlined the process.

"Captain Kris is on the blower. Miami is off," DaveyWavey said. "We get an extra night foc (free of charge) and end up in the Bahamas on Sunday. Ferry to Miami. Last night of holiday blues postponed for now."

The logistics seemed complicated on the face of it. Guests would transfer to Fort Lauderdale via the Bimini fast ferry on Sunday, and then have complimentary ground transportation to either Fort Lauderdale or Miami airports. Passengers who bought flights through Crystal would be automatically rebooked, while others who made independent arrangements could submit their change fees for reimbursement.

None of the Cruise Critic members onboard reported problems. "I’m really lucky that I’d booked my flights for Monday instead so it works well for me. I’ll just stay in FLL Sunday night. I’m really sorry for all those that are inconvenienced though," Davey Wavey said.

"We’re fine," said TER777. "We get an extra day and all the help anyone needs, if any, in sorting out travel arrangements."

A Real Life Pirates of the Caribbean; Crew Concerns Emerge

The last extra day definitely had a surreal tinge to it, passengers reported.

"So we are the Pirates of the Caribbean! Sailing around trying to dodge the feds. I Think Captain Kris isn't quite as swashbuckling as Captain Jack though. Rumour is that the Symphony is wearing a jumbo pair of sunglasses and a false moustache," Davey Wavey said.

"The crew remain incredible. I really don’t know how they are doing it…..I’ve felt emotional several times talking to them. They deserve so much better. I cashed in my $700 casino winnings and distributed that as best I could…It certainly was sad to see the expression on the crews faces pulling into Bimini."

Many people on the Cruise Critic boards echoed Davey Wavey's concerns about the crew and how they would deal with their jobs ending. "We can make contributions to the crew welfare fund by filling out the form at the front desk. It will be charged to one’s shipboard account," TER777 said.

"Russ at the farewell show said he’s been informed both onboard and shoreside that the crew will be paid their contracts and be repatriated. Great!"

Saturday night onboard was, by all accounts, bittersweet -- but accompanied with the luxury Crystal touch.

"Dinner on the final evening was no different than normal. Liquor was flowing at the bars," said Texas Tillie.

"Well, a wonderful evening," DaveyWavey said. "Pre-dinner cocktails in the Connoisseurs with my fellow Pirates. A wonderful meal at Waterside and then along to the Avenue. Seared Tuna, Beef Consommé, Ribeye and then 2 desserts and cheese. Out with a bang. And all for free!"

Getting off Crystal Symphony and back to Fort Lauderdale wasn't quite as easy, and made even more complicated by the media attention that the ship was receiving.

"Not sure where to start, really," Davey Wavey said. "Rumours flew around the ship last night that the warrant had gone international, they pulled up the drawbridge at 11.30 just in case.

"This morning was the weirdest disembarkation ever," he said. The original time of 7:15 a.m. was moved back, several times. When the ferry finally left, passengers watched Captain Kris waving to guests, with a final salute of the horn from Crystal Symphony.

"It turned out to be the worst ferry journey I’ve ever had," Davey Wavey said. "Who knew the Caribbean could equal The Drake [Passage]? Luckily it doesn’t bother me so I carried on my own little party whilst the little green people around me glared on. I'm luckily never seasick and have balance that would be envied by a cat."

Several police cars with flashing lights were waiting at the dock when the ferry arrived, Davey Wavey said. Another surprise -- all of the Crystal Symphony crew members who came across on the ferry had to remain onboard.

"I don't know what was happening but suspect that they were about to be questioned," Davey Wavey said. "After everything these wonderful people have endured, really?"

Reporters crowded the Crystal Symphony passengers. "I've never been questioned by reporters before at the end of a holiday as to the quality of the accommodation and service received but I certainly told them that I had the most amazing holiday ever and that the crew were absolutely fabulous."

All in all, "it certainly wasn’t the adventure I planned, but I've loved every minute."