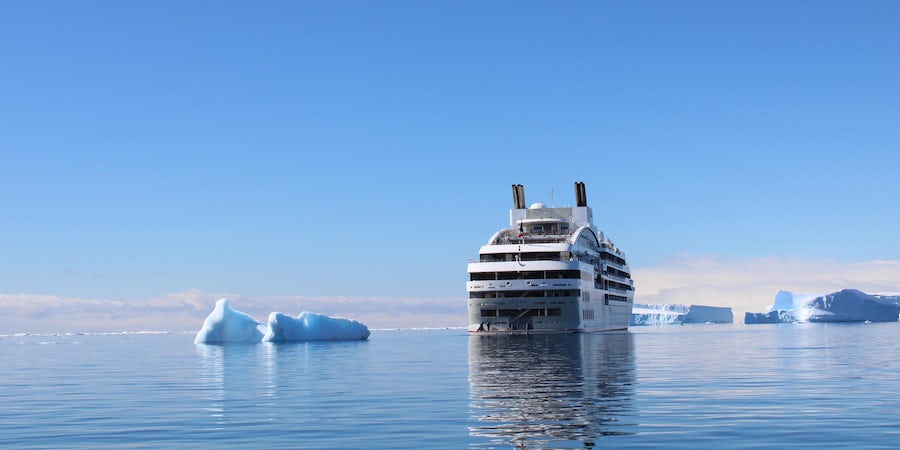 Just Back From Antarctica During Omicron: Lessons Learned

As COVID-19's omicron variant raged in North America, my husband and I left home to travel internationally, to cruise as far south as we could go, hanging out amongst icebergs, glaciers, and hundreds of thousands of penguins in Antarctica. It was not an easy decision in such a difficult time.

The 18-night, photo-themed journey with Abercrombie & Kent included two nights in Buenos Aires and a 16-night sailing from Ushuaia, Argentina, on the 244-passenger Le Lyrial, chartered from Ponant (A&K limits the capacity to 199 in Antarctica).

Immersed in a wonderland of nature -- where man is insignificant, where animals rule, where weather can change on a dime, and where survival is the prime order of the day -- the trip turned out to be a life-affirming experience.

And yes, some Covid cases did arrive on our ship (more on that below), an outbreak that tests revealed among the ship's crew, with whom we grew close during our 16 nights together at sea.

There is no escaping a pandemic even at the far end of the world.

We Were More Concerned About a Cancellation Than Omicron

Vaccinated and boosted, my husband and I had marked our early January Antarctica and South Georgia cruise on the calendar nearly a year ago.

It was a bucket list trip with a significant time commitment and prices to match -- sale fares from around $20,000 per person. Most passengers had booked two years in advance, according to A&K.

Though some cruise lines were dropping their Antarctica season and others cancelled individual sailings while COVID-19 case counts rose in many parts of the world, A&K managed to operate its first three sailings to the White Continent beginning November 30, 2021, all COVID-free (after a cancelled season in 2020). We were booked on the luxury tour operator's fourth and final cruise of their season.

A&K offered assurances that based on Ponant's strict rules all people onboard our ship would be vaccinated, masks would be required (except when eating or drinking), social distancing would be in place, and rounds of COVID-19 tests would continue throughout our trip.

As omicron took hold around the world, our friends and family questioned our sanity for even considering travel to the remote edges of the world during the pandemic.

We were more concerned that our trip would be cancelled at the last minute. Our spirit of adventure outweighed our fears of getting COVID on the road as we decided that being in a tightly controlled cruise environment probably would be less stressful than being at home, food shopping and otherwise going about our daily business in a crowded world. Plus, we would not run into people outside our travel bubble in Antarctica.

A call to A&K revealed that most people booked on our trip felt the same. Only three cabins had recently cancelled.

The first challenge was getting our required PCR test to enter Argentina within 72 hours of our flight. That timing coincided with New Year's Day, when labs were closed. We ended up paying $275 each for a rapid-PCR test at the Cleveland airport, where we tested negative. We learned several people had to cancel when they tested positive.

Two flights later and ensconced at the fancy Park Hyatt hotel in Buenos Aires, we were tested again. For socially distancing reasons, A&K had divided those on the trip into two groups for a welcome reception, limiting city tours to small groups. That turned out to be a good thing when two couples tested positive, meaning rather than cruising with us they would be quarantining at the hotel before heading back home.

The rest of us boarded a three-hour charter flight to Ushuaia, Argentina. On Le Lyrial, we were 104 passengers, plus A&K's 18-person expedition team, and Ponant's crew of 144.

Humpback Whales, Elephant Seals, Icebergs and a Lot of Penguins

The midnight sun was shining that evening as we transited the Beagle Channel headed toward the Southern Ocean and South Georgia. Our highly experienced expedition director Suzana Machado D'Oliveira thanked us during the first daily evening briefing for braving what would be lots testing, sanitizing, and special rules -- such as the steam room only open by reservation for social distancing reasons.

We had luck aplenty with the weather, at times even sunny and mostly in the upper 30s F (around single figures in centigrade). As a number of other lines had cancelled cruises, our ship also had unexpected free reign on landing sights, in areas that are carefully regulated in terms of visitor numbers and experiences.

Sea days were mostly mild, the waves never very rough (in the notoriously rocky Drake Passage two weeks later). In a place where excursions are at the mercy of weather conditions, we were able to do Zodiac landings and tours each day when we weren't at sea. Albatross and giant southern petrels flew overhead, humpback whales made appearances, and penguins and seals and sea birds were on view as we disembarked Zodiacs for scenes that seemed right out of nature documentaries.

Planning the trip, I hoped to see some king penguins, which can grow up to 38 inches. We didn't just view a penguin or two but rather were surrounded by views of thousands of the nesting birds. Landings in South Georgia, and later Antarctica also brought us to colonies of cute chinstraps, curious Gentoos and Adelies and spiky haired macaronis. Some of the birds approached us, seemingly curious about humans as spectacle. At the same time, we needed to clear the path for their island neighbors, especially huge elephant seals and male fur seals ready to guard their turf against encroachment.

On the continent -- the seventh for my husband and me -- we set foot on dry land and later on snow and boarded zodiacs for views of leopard seals and Weddell seals lounging on blue icebergs, nonplussed by our presence.

A&K has been visiting Antarctica for 30 years. The expedition team was extraordinary -- experts in their fields whether geology, marine biology, ornithology, and more. On the ship they talked ozone layer and global warming. We learned about the exploits of British Explorer Ernest Shackleton as we caught views of Elephant Island where he and his crew were stranded after the Endurance went down (miraculously all survived). Two professional photographers, generous with advice and personal attention, helped us improve our photo skills and capture memories of our experience.

We were well briefed on animal behaviors, life in the harsh climate, and environmental changes on our planet.

We were prepared emotionally for the fact that COVID-19 probably would find Le Lyrial. Based on what was happening on ships in the U.S., we figured any outbreak would be contained, with numbers low. Throughout our trip, we were constantly reminded to wear masks, and everyone willingly complied.

The increase in crew cases continued. D'Oliveira kept us informed, somberly delivering the news. Suddenly the ship's spa was closed, gym hours had to be reserved and there was no pianist and singer performing at cocktail hour. Fortunately, everyone was asymptomatic, and quickly quarantined.

The last night onboard, docked at the pier in Ushuaia, our favorite waiter, Ronny, was missing from the ship's main restaurant. We were told he had been in close contact with someone who tested positive. In all, some 40 crew members were sent to Le Lyrial's sister ship, L'Austral, which had been designated by Ponant as a quarantine venue for crew off its four ships in Antarctica. Passengers who had been booked on L'Austral were rebooked on other ships.

All passengers on our cruise again tested negative and were cleared for their flights home or stays in Argentina. But we felt sad for crew members in our tight community and hoped they would all remain healthy.

Final Thoughts on Our Cruise to Antarctica

On our way home, popped out of our cruise bubble and into airports and planes, my husband and I found ourselves wary as we encountered people whose recent medical history we did not know. We had felt safer on the ship.

As I write this, we are in self-imposed quarantine for five days, following recommendations of the CDC for those who have been on cruises. We've also planned a couple rounds of tests with home kits.

We are grateful to have been out in the world exploring Mother Nature's mysteries in one of the remotest regions of the globe, glad we did the trip, and happy to be home.

As Russ Manning, naturalist, zodiac driver and recipient of a UK Polar Medal, put it: "Back home, shut your eyes, have a glass of wine, and this is still here. This amazing wildlife is still here."