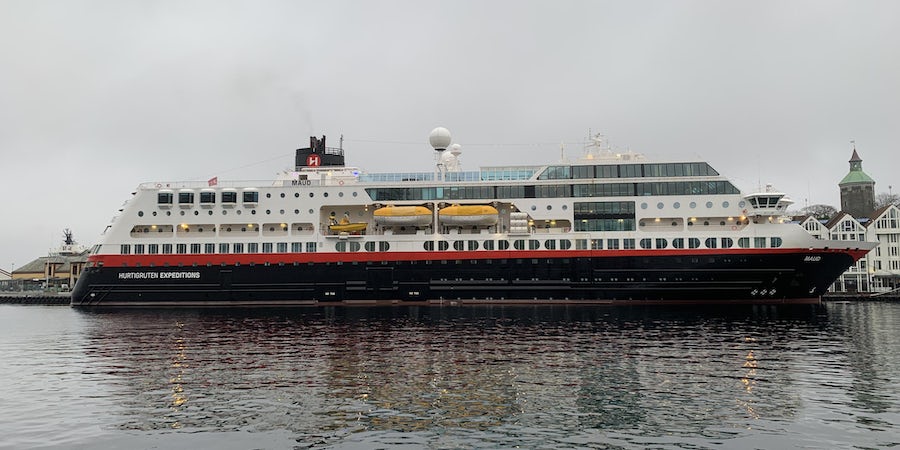 Just Back from the Arctic with Hurtigruten: Following in the Footsteps of Susan Calman

Scottish comedian Susan Calman sailed to Norway with Hurtigruten in her first episode of "Cruising with Susan Calman" in December.

It's the first time Hurtigruten has based a ship in the UK, and MS Maud -- formerly known as Midnatsol -- will split its time between Norway (until March), followed by UK West Coast (sailings for the remainder of the summer), then reverting back to Norway in the winter of 2022-23.

According to Hurtigruten, in the first 15 days since the showaired, bookings for MS Maud in Norway rose seven times over the previous month (or an uplift of 590 percent -- which is on par with the affect Jane McDonald had on bookings).

So inspired were we by her sailing, we decided to try out the cruise for ourselves, and got onboard Maud just after Christmas for half of the journey from Dover.

Health & Safety Onboard -- and Pre-Boarding – MS Maud Is Paramount

We've been lucky enough to have taken a number of cruises since the industry restarted in May from the UK, and we've been hugely impressed by the number of safety hoops passengers have to jump through to even get to the terminal, let alone onto the ship.

a Completed Passenger Locator Form required by the Norwegian government to enter Norway; and a negative PCR test taken 72 hours before boarding, at your own expense.

Once pierside, we were required to show proof of vaccination and immediately took an antigen test at the terminal prior to boarding.

Onboard MS Maud, the usual safety precautions were in place (mask wearing, social distancing, hand sanitising stations), and the ship was sailing (intentionally or otherwise) less than half full.

All the safety precautions were adhered to by passengers and strictly enforced by crew, and yet… there were still a handful of COVID-19 cases onboard (see below).

For anyone who has taken the classic Coastal Voyage from Bergen to Kirkenes and back, it's worth noting that although this sailing from Dover follows the same route up and down the 1,500-mile-long Norwegian coastline, it does not go as far north as Kirkenes, nor does it stop as frequently, making just 12 stops in 15 days compared to 34 stops in 12 days on the traditional Bergen-Kirkenes Coastal Voyage.

This means an awful lot of time is spent at sea -- so be prepared for that. The line has also elected to skip what we feel are one of the main charms of the traditional Norwegian Coastal Voyage -- multiple port stops, sometimes for as little as 15 minutes in small, out-of-the way communities -- in one day.

Of course, there's good reason for this, as this is not the hybrid cruise-ferry Coastal Express which is obliged to stop to drop off mail and goods and pick up locals, but rather the more cruise-oriented expedition side of Hurtigruten.

Even with just one port call per day, stops are very short -- as little as four to six hours in some cases -- which means if you do elect to do an excursion, that will take up most of your time ashore, leaving little time to explore, which we felt was a great shame.

North Sea Weather Might Have a Significant Impact on Your Cruise

If you choose to visit the Arctic in mid-winter, you have to expect the worst and be pleasantly surprised when things go to plan.

All was fine up to Bronnoysund (Day 5 and exactly halfway up the coast, and the dead center of Norway), where we took part in a trek to see the famous Torghatten Rock, which has a hole in the middle.

However, as we sailed into the Arctic Circle that evening, high winds prevented us from docking in Reine, and we had to head to the more sheltered harbour of Svolvaer, our next port of call.

Despite its relative shelter, currents in Svolvaer were too strong to take part in kayaking and a planned visit to a nearby fishing village near Reine also had to be skipped. Both hikes offered by Hurtigruten also had to be changed.

It's worth noting however, that almost all activities (bar the huskies and cross-country skiing) are included in the cost of your cruise. This is a major difference from the Coastal Voyage, where you have to pay for almost all tours ashore -- and in Norwegian Kroner, to boot.

COVID-19 Can Also Affect Your Cruise When Aboard MS Maud

Before we arrived in Tromso, there was a mandatory mid-cruise COVID-19 test for all passengers.

And despite the extensive safety precautions outlined above, two passengers tested positive for COVID-19. We were asked to return to our cabins as the ship lay alongside the pier in Tromso.

This tally of those infected steadily ticked up, topping out at eight. We were informed that none of them were displaying any symptoms.

All morning excursions, including the highlight, Husky sledding -- were cancelled.

But by late morning, all the affected passengers were taken off the ship and the Norwegian authorities let the rest of the guests disembark MS Maud to explore this beautiful city.

The weather kicked up again, causing the planned night kayaking excursion to be cancelled, again due to high currents.

Sadly, strong winds and storms also meant we could not get to the North Cape (though we did get as far as Honningsvag, the most northerly town in Norway, pictured above), as planned, though this is not uncommon as the journey is often affected by massive amounts of snowfall at this time of year.

We hope the rest of the cruise went off as planned, as the ship turned south for the journey back to the UK, via beautiful Bergen.

We Saw the Northern Lights!

Forget the bad weather, forget COVID -- nothing (well, except cloud cover) stops the Northern Lights at this time of year and at this latitude.

And, just as were finishing a fascinating lecture given by one of the outstanding expedition guides, Lara, about her four years living in Svalbard with huskies, another guide, Regina, came rushing past us to announce that the Northern Lights had been spotted.

We all rushed up to the top deck and were treated to a wonderful display which lasted around 15 minutes, in which we saw swirls and curtains as the corona peaked in the skies above Tromso.

Unplanned, hoped for, but not guaranteed -- the Northern Lights make every worry, change or concern fade away, as we gaze up at them, mesmerized by their beauty.

The Expedition Guides Are Outstanding

If you are lucky enough to be travelling with Expedition leader Torstein (pictured above), and his team which includes Lara and Regina, as well as Alicia, Vivi, David, Jon, Magnus (also pictured, dressed as the Norse god of the sea, Njord) and Otavia, you will be in great hands.

You'd be hard-pressed to find a more enthusiastic, passionate, knowledgeable and friendly bunch as this group.

Whatever was thrown at them -- COVID-19 or bad weather -- they never lost their sense of humor and professionalism.

On the few excursions we did manage to take part in, they were encouraging and kind, ensuring all passengers were safe, well hydrated and warm.

Also, each evening, one of the team would give a "tiny talk" -- a short lecture with slides on their specialised subject -- whether that was Magnus' wonderful storytelling, Lara's incredible life with huskies in Svalbard, Jon's photo tips or David's fascinating knowledge of geology and astronomy.

The Ship is Comfortable but Will be Even Better Post-Refurb

Maud -- the former Midnatsol, launched in 2003 -- was due a complete refurb in 2021, but we all know what happened next. A few tweaks were made (the restaurant and bar names were changed), but a significant refurb is not now due until early next year.

Yet despite this, the ship still has that wonderfully comfy, albeit slightly old-fashioned feel, you get on vessels approaching their 20th year.

Food, as on all Hurtigruten ships, was outstanding -- fresh, beautifully prepared and presented. Note that during COVID-19 times the buffet in the main dining room, Aune, has been suspended (except for a limited one at breakfast), and the portions are somewhat meagre (though you can always ask for second helpings).

The limited refurb has seen the introduction of two excellent dining venues -- Friedheim, for comfort food such as burgers, hot dogs, tacos and even dumplings; opposite you'll find the speciality restaurant (Lindstrom), which is a more formal venue, free for suite guests and €25 pp for everyone else.

It's also worth noting that the ship, catering for Brits, has both Marmite at breakfast and kettles in cabins.

It's also worth noting that Hurtigruten has gone almost all inclusive on these voyages, with alcohol at meals, tips and Wi-Fi, included, which is a significant saving when you consider the price of alcohol in Norway.

Regular cabins could do with a refresh, and there is a significant jump to the suite level, which are outstanding -- and huge, with a sitting room encased in picture windows for the perfect way to watch the stunning landscape slip by, as well as bathrooms with heated floors and tubs (a real luxury after a hard day's hiking).

We look forward to seeing the beautiful mini-suites that have been installed on some of the line's existing fleet.

The gym and saunas are too small for this ship and are scheduled for a refresh; and sadly, the outdoor hot tubs were out of action for the entirety of our time onboard.

If you want the variety of multiple port stops and a mixed crowd, you might be better off booking the Coastal Express.

However, if you are happy with a 100 percent Brit crowd and long stretches at sea, then this cruise would suit you.

Plus, the ease of getting on and off in Dover cannot be underestimated, especially with the hassle of air travel.

And the fact it is almost all-inclusive is also a huge draw for British passengers, who like their costs at upfront and transparent.

Whatever you choose, discovering the beauty of Norway, experiencing what this stunning country and friendly people have to offer and being looked after by an outstanding crew and guides, you will not be disappointed.