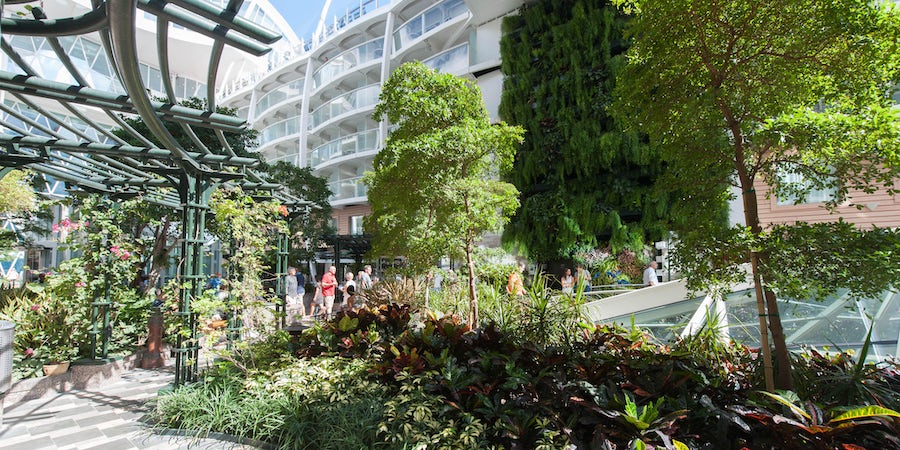 Central Park on Allure of the Seas (Photo: Cruise Critic)

An outdoor sanctuary with winding walkways and lush foliage -- on a cruise ship? When you're in Royal Caribbean's Central Park, you might need to pinch yourself to remember you're in the middle of the ocean. Found on the line's Oasis-class ships, it's a place cruisers can go to escape the crowds -- whether with a good book during the day or for a romantic dinner at night.

Central Park is one of seven "neighborhoods" (others include the Boardwalk and Royal Promenade) found on Oasis-class ships -- each with its own distinct ambiance and venues. More than 10,000 live plants and flowers give Central Park its wow factor. The greenery combined with vine-draped awnings, stone wall accents, benches and other park-like touches give the space a quaint, charming feel. You'll even hear nature sound effects -- via speakers hidden in the plants -- like birds chirping and frogs croaking, throughout the day.

Nestled in the middle of the ship, Central Park is a hub for daytime relaxation and nighttime fun. Walkways are lined with restaurants (most are dinner-only) and bars, as well as sculptures (each ship's artwork is unique). Central Park cabins -- technically inside cabins with a view, either through a window or balcony -- flank the space, creating an enclave with an open sky view. The neighborhood's central location also means you're likely to pass through it while making your way from one end of the ship to the other.

The Park Cafe is the only complimentary venue in Central Park. It's a popular spot in mornings and afternoons, as it serves made-to-order and to-go breakfast and lunch. Seating arrangements (benches and padded faux-wood patio chairs), where cruisers come to read or simply kick back and enjoy the scenery, are scattered around the grounds.

At night, Central Park retains its relaxed feel even when cruisers flock to its restaurants and bars for a splurge-worthy date night. Restaurants vary by ship, but all include Chops Grille, the line's signature steakhouse; 150 Central Park, the line's most upscale eatery, and one of the line's Italian restaurants -- either Giovanni's Table or Jamie's Italian (helmed by celebrity chef, Jamie Oliver). Some offer outdoor seating.

All ships' Central Park neighborhoods feature three bars: Vintages Wine Bar (one of our favorite wine bars at sea); the Trellis Bar, a small open-air bar nestled in a courtyard; and the Rising Tide Bar, a "floating" bar that moves between Central Park and the Royal Promenade, a few decks below.

Strolling "the grounds" is totally free, as is the casual and much-loved Park Cafe. Bear in mind, though: The specialty restaurants, which vary by ship, cost extra. You also will have to pay for any drinks you order at Vines Wine Bar and the Trellis Bar.

Related: Fee vs. Free: What's Included in Your Cruise Fare?

Take a virtual tour of Central Park on Harmony of the Seas.