You may also like
Dismiss
Onboard Entertainment UK Style: The 6 Best Cruise Lines
9 Classic British Cruise Lines
Cunard Line vs. P&O Cruises
20 Cruise Movies That Will Make You Want to Sail
Great Cruise Destinations: 7 Classic Trips You Should Not Miss
Cruise Classes: 21 Things You Can Learn on Your Next Cruise
Cunard Line History
10 Great Tips to Help You Relax on Your Cruise
Cruise Critic Members Share 6 Tips on Planning a Transatlantic Cruise
10 Things to Do on Queen Mary 2 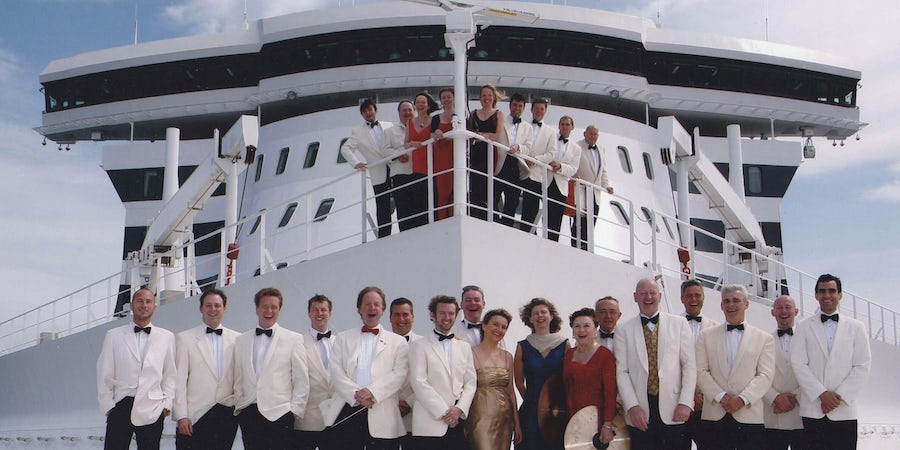 Cunard Line's Queen Mary 2 is a one-of-a-kind ship -- the only true ocean liner in regular passenger service across the Atlantic, sailing to and from New York and Southampton, UK.

But Queen Mary 2 has also found a clever niche, offering themed transatlantic crossings each year. Maybe you want to sail with acclaimed authors Simon Winchester or Ian Rankin on the Literary Festival at sea, or cross to the music of Anthony Inglis and the National Symphony Orchestra or take part in a week of theatre on the London Theatre at Sea transatlantic crossing.

Here is a rundown of what cruisers can expect onboard Queen Mary 2's transatlantic theme cruises in 2022.

Sailing eastbound from New York to Southampton, the weeklong crossing celebrates the written word in all its variety with workshops, discussions and Q&As taking in literature, art, film, history, and politics.

"I've been on Queen Mary 2 before when she was in Red Hook for lunch with a good friend who was sailing on her," author Simon Winchester told Cruise Critic in an interview in 2021. "But I haven't sailed aboard her until now."

Winchester -- who regaled Cruise Critic for nearly an hour with stories of his travels and literary exploits -- is exactly the kind of author experience passengers can find onboard: a genial, intimate "getting-to-know you" opportunity where authors talk not only about their craft, but also about how their most famous works came to be.

For Winchester, that involved being up north in the remote Canadian Arctic when his new publicist rang on a satellite radio.

"The radio suddenly burbles into life, and I'm thinking, 'Oh no'," said Winchester. "And they say, 'We have an urgent message for you, would you kindly call this telephone number -- which I remember to this day. And this woman, Jane, answered and she said, 'Oh thank goodness we got you. Your new book (The Professor and the Madman) has attracted the attention of the New York Times, who want to interview you."

Winchester had to take a remote flight from the Canadian Arctic back to New York city in time to be interviewed. The book was a hit and changed the trajectory of his life forever.

Queen Mary 2 itself is also well-suited to the literary world. It boasts the largest library at sea on Deck 8 forward, and even has its own onboard book shop filled with the latest titles and, of course, numerous volumes on Cunard history and the history of Queen Mary 2.

A Queen Mary 2 transatlantic crossing with the National Symphony Orchestra is a real treat, with passengers treated to a concert of all-American music, including Gershwin’s Rhapsody in Blue, after departing New York, and an evening celebrating the Best of British music before Queen Mary 2 arrives in Southampton.

That is, of course, in addition to the bounty of live music passengers can enjoy aboard Queen Mary 2 by day and night, from the jazz trio in the Chart Room to the rollicking pub tunes in The Golden Lion Pub.

"You will have fun with your fellow passengers," conductor Anthony Inglis told Cruise Critic in an interview. "And that's what it's all about. There are very few people onboard who don't participate, or who don't see at least one of the performances onboard."

Inglis -- who appears with the National Symphony Orchestra onboard Queen Mary 2 and is the line's longest-serving guest performer -- said crossing with Cunard is an honor.

"They adore having me and the orchestra onboard," he said. "Queen Mary 2 has plenty of musicians, which I think is something to be very proud of. The music onboard is live, as much as possible. I think it's a very good way of celebrating the return of the industry -- the return of us, maybe -- to Cunard, with all the musicians on stage at once."

Inglis will also conduct a special performance of Bolero, and routinely involves passengers in a passenger-led choir on each crossing in addition to leading fascinating Q&A sessions.

Theatre buffs can take in a transatlantic crossing onboard Queen Mary 2 in addition to being instructed by West End choreographers in dance classes and engaging in a lineup of special guests who will discuss their careers, life in the theatre, and the productions themselves.

The crossing will showcase Olivier Award-winning talent. Britain's highest honors in theatre, the Olivier Awards will present a special one-off production at sea onboard Queen Mary 2, shown to passengers in the ship's Royal Court Theatre.

"It's selling incredibly well," Julian Bird, CEO of the Society of London Theatre and UK Theatre, which presents the Olivier Awards, told Cruise Critic. "What's really gratifying is I've heard from people who've moved from (the 2020 sailing) to 2021 to 2022."

"I think we'll have a group of people onboard who really want to experience everything that we can offer them."

Bird said the productions offered on Queen Mary 2 would be intricate and involved, and worthy of the Olivier Awards moniker.

"We're not just having people stand up and sing songs," he explained. "We're taking people behind the scenes and trying to reflect the fact that different people will have different interests. Some people will be fascinated by the history of London's famous theatres, while some people will actually want to come and do craft workshops.

"Other people want to come dance all week or do singing classes all week, but be taught by the resident choreographer from one of London's top shows. So, we try to make opportunities for people to join in, but also for people who just want to sit back and enjoy."

Cunard has yet to reveal the full lineup of guests for this voyage, which will be announced closer to the sailing's May 2022 departure date.

Art afficionados and budding creators can take in masterclasses, workshops and informative sessions with artists from around the globe on this special transatlantic crossing.

This is Cunard's first-ever Art and Design Week crossing, and while individual guest artists and lecturers have yet to be announced, sailing aboard Queen Mary 2 itself is an inspiration for artists, with the ship's interiors and exterior paying homage to the great Cunarders that have come before it, and to the art and design of the original transatlantic liners.