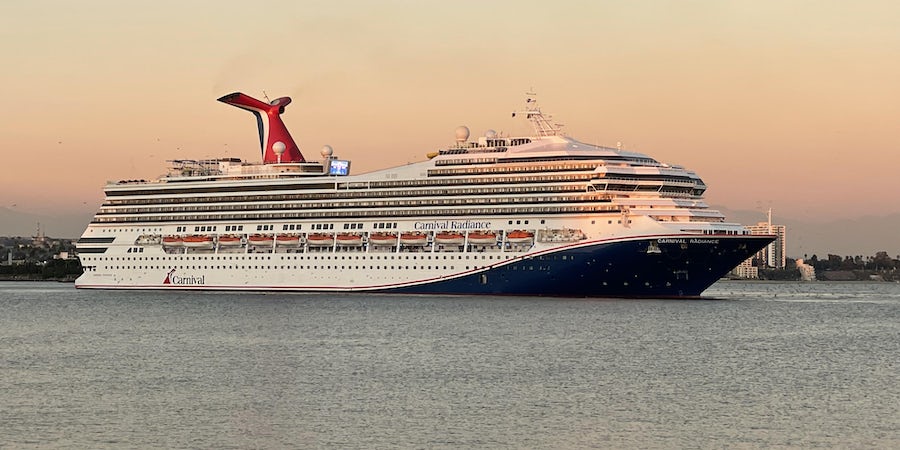 Carnival Radiance has made its debut on the West Coast, sailing cruises to Mexico and Catalina Island – but while the ship's name is brand new, the vessel itself is not.

A $200 million makeover of the ship-formerly-known-as-Carnival Victory has transformed the vessel into one that looks more like its modern fleetmates, as well as brought Carnival signature venues onboard.

We spent a day touring Carnival Radiance when it arrived in Long Beach, and have the following first impressions of Carnival's latest West Coast cruise ship.

Carnival’s then architect Joseph Farcus took on the original Carnival Victory in 2000. The ship was quite an eye-popper with myriad flourishes inspired by "the world’s seas."  There was the Mediterranean Restaurant buffet eatery with its Moorish decor, the Caribbean Show Lounge, which was dominated by a giant glass chandelier that would make the Phantom proud and the Aegean Bar, with its incongruous combination of Italian marble, zebra patterned bar stools and checkerboard tile decking.

That's all been purged with Carnival Radiance, save for a remaining trace or two (like the Neptune mosaics in the upper reaches of the Atrium and a few bronze seahorse door handles). The ship’s new toned-down interior vibe is on par with more recent ships like Carnival Panorama and Carnival Horizon.

Carnival Radiance Can Carry More Passengers, Which Could Lead to Crowding

With 110 new cabins, Carnival Radiance's double occupancy capacity increases to 2,984 from 2,764 guests and in order to accommodate them, several public spaces were either modified or eliminated altogether.

The new cabins on forward Deck 3 resulted in the once three-deck tall Caribbean Show Lounge being pared down to two levels as the Liquid Lounge.  On aft Deck 5, the Black and Red Seas Bar, the Irish Sea Bar and the Adriatic Lounge have also been replaced with a bloc of new cabins.

In this Covid era with most ships, including Radiance, sailing at a reduced capacity, these changes will not immediately affect the passenger flow but once things get back to normal, Carnival Radiance may feel a bit more congested than it did as Carnival Victory.

In exchange for less elbow room, Carnival Radiance guests are rewarded with a host of new venues, including a new Waterworks Aqua Park with the Twister and Drain Pipe waterslides and a Power Drencher.

A new Sports Square on aft Deck 11 offers up a ropes course, miniature golf, a basketball court and other games areas and the adults-only Serenity retreat at the top of the ship has been expanded with the outward extension of the port side of Deck 14.

Carnival Radiance is the third ship in the fleet to feature the Heroes Bar, which is dedicated to veterans and their families.  Although it still functions as a sports bar, the space replaces the generically named Sports Bar, which was originally the aforementioned Aegean Bar.

The former Club Arctic on Deck 5 has been transformed into the Red Frog Pub and Club 88 Piano Bar, while the adjacent Alchemy Bar had already overtaken the former Caspian Bar in a previous refit.

Overlooking the Atrium on Deck 4, the new JavaBlue Cafe is in a corner once dedicated to the Indian Library and on aft Deck 4, the Ionian Room is now the Limelight Lounge, which also doubles as the Punchliner Comedy Club.

Carnival Radiance Has New Restaurants That Are Included In Your Fare

Some included dining venues on Carnival Radiance, like the Aft Restaurant (formerly the Pacific Dining Room) and the Lido Marketplace buffet retain their general layout and function, albeit with tamer, more contemporary decor.

The Lido Marketplace is home to the Blue Iguana Cantina featuring Mexican dishes and the Guy Fieri-sponsored Guy’s Burger Joint, which were added in a prior refit.  At the aft end of the Lido Marketplace, the al fresco Pizzeria del Capitano and Big Chicken replace the Pizza Pirate and the Seafood Shack, which has been moved inside.

The second Big Chicken in the Carnival fleet was officially dedicated by its sponsor Shaquille O’Neal prior to the ship’s naming by O’Neal’s mother, Doctor Lucille O’Neal on December 12.  It features the NBA superstar’s family recipes, which range from chicken and biscuits with honey glaze syrup, house made sweet and spicy pickles and jalapeño slaw to crispy chicken sandwiches. The first one debuted on Carnival Mardi Gras, to rave reviews.

To make its transformation complete, Carnival Radiance has added some of the line's favorite specialty restaurants to the lineup.

The Forward Restaurant (the former Atlantic Dining Room) surrenders half of its balcony level to the new extra tariff Fahrenheit 555 Steakhouse.

By removing the sliding glass SkyDome over the aft pool, the ship was able to squeeze in a second Guy Fieri venue, the Guy’s Pig and Anchor Bar-B-Que Smokehouse, at the back of  Deck 11.

Other new eateries include Bonsai Sushi, which offers a menu of a la carte priced sushi and hot Asian dishes and Cucina del Capitano, which occupies the upper level of the Lido Marketplace and features Italian family recipes from former Carnival officers.

Carnival Radiance also has a dedicated Chef’s Table that was carved out of former galley space and is accessed from the Forward Restaurant.