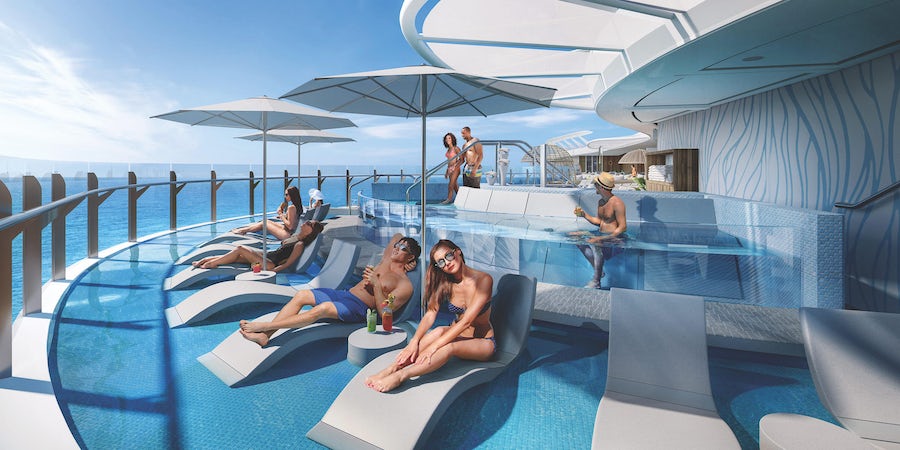 Wonder of the Seas will boast a new Suite Neighbourhood (Rendering: Royal Caribbean)

A good first act is hard to follow, but Royal Caribbean has been doing it for decades, making each successive cruise ship bigger, better and somehow more welcoming than the last. When it debuts in March 2022, Wonder of the Seas will become the largest cruise ship in the world, surpassing sister-ship Symphony of the Seas, which debuted in 2018.

There are a number of ways to calculate what the biggest passenger ship is. In the case of Wonder of the Seas, it will command two distinctive titles: the longest cruise ship afloat at 1,188 feet, and the largest cruise ship by gross tonnage, at nearly 237,000.

Here are the five new features we're most excited about aboard Wonder of the Seas:

The Suite Neighborhood Aboard Wonder of the Seas

The Suite Neighborhood is a first for Royal Caribbean and is only on Wonder of the Seas. This private enclave commands a midship location on decks 16, 17 and 18 and wraps around the ship's subtly redesigned funnel uptakes.

This new area -- technically the eighth themed "neighborhood" onboard -- offers suite passengers the chance to indulge in some exclusive amenities. Guests will find their own private sun deck on Deck 18 overlooking the aft part of the ship, complete with lavish loungers, varied seating options and its own dedicated plunge pool and bar.

Suite passengers still have access to a private suite lounge located within the complex on Deck 17, and the private Coastal Kitchen restaurant, which serves up Mediterranean-Californian cuisine in an elegant and understated setting.

Until now, Royal Caribbean has resisted the luxury ship-within-a-ship concept that has been pioneered by other lines. That's not to say its ships haven't offered lavish suites -- they have -- but Wonder of the Seas takes things to the next level for top-tier suite passengers by combining a number of key spaces into one lavish area we can't wait to check out.

The Vue, the Newest Bar Aboard Wonder of the Seas

Who doesn't love sundowners with a view? That's exactly what's being served up at the newest bar onboard Wonder of the Seas: a watering hole with libations to match the superb ocean vistas.

Situated forward on the port side of Deck 15, The Vue occupies an area that used to house one of the cantilevered whirlpool tubs onboard sister Symphony of the Seas, transformed instead into a scenic bar located adjacent to the ship's massive Solarium relaxation area.

Aside from offering some unique vistas of the ocean and, indeed, Wonder of the Seas itself, The Vue looks like a fantastically intimate venue on what is, at its heart, a 5,734-passenger ship. A colored canopy illuminates The Vue at night, making it an ideal watering hole by day or night.

The All-New Pool Deck Aboard Wonder of the Seas

Royal Caribbean's pool deck design has always been innovative, but the last few years have seen the line really start reaching for the stars in terms of decor, features and arrangement, starting with the superb refit granted to Navigator of the Seas just before the global travel shutdown.

Wonder of the Seas takes the pool deck concept to the next level. On the starboard side of Deck 15, passengers will find the Perfect Storm trio of waterslides and the resort-like Beach Pool, while over on the port side, the kid-friendly Splashaway Bay offers aquatic fun for younger ones.

Two additional swimming pools are located farther aft, adjacent to The Lime and Coconut, Royal Caribbean's tropical pool deck bar concept. And, all the way at the stern, passengers can find Royal Caribbean's FlowRider surf simulator and the Ultimate Abyss slide that cascades dramatically down Wonder of the Seas' stern, from Deck 16 to Deck 6.

It is interesting to note Wonder of the Seas only has a single FlowRider; other Oasis Class ships boast two of the popular surfing simulators. That, however, is because Royal Caribbean had to make way for another new feature:

The Adventure Playscape aboard Wonder of the Seas

Located on Deck 16 aft, on the starboard side opposite the lone Flowrider, is Royal Caribbean's new Adventure Playscape aboard Wonder of the Seas.

Wonder of the Seas' deck plans don't do the area justice; rather than an activity center, picture a mini theme park gone to sea.

It's a first for Royal Caribbean and another family-friendly feature exclusive to Wonder of the Seas. It looks like it's just for kids, but we're hoping adults can experience the fun, too.

An Evolution of the Oasis Class Ships

Perhaps most of all, Wonder of the Seas represents the latest evolution of the wildly popular Oasis Class ships. Passengers can expect to find subtle tweaks to decor and soft furnishings throughout, along with all of the latest Royal Caribbean bells-and-whistles.

Of course, the ship also includes all of the features that originally made Oasis of the Seas (and other Royal Caribbean ships) so popular. We're talking about the kitschy Rising Tide Bar, the robotic Bionic Bar (that first debuted aboard Quantum of the Seas in 2014), the indoor ice skating rink concept that Royal Caribbean introduced in 1999 aboard Voyager of the Seas, and time-honored favorite watering holes like the Schooner Bar and Boleros.

No ship is ever perfect, but with Wonder of the Seas, Royal Caribbean might have come closer than ever before.

Join Cruise Critic in 2022 as we report from onboard the new Wonder of the Seas and stay tuned for more informative features about the new largest passenger ship in the world.