You may also like
Dismiss
8 Things to Watch Out for When Cruising to China
Norwegian Cruise Line Internet Packages and Prices
Cunard Internet Packages and Prices
7 Easy Things You Can Do to Help the Environment When You Cruise
Royal Caribbean Cruise FAQ
Embarkation in White Bay, Sydney: Cruise Terminal Parking, Address and Amenities
6 Best Majestic Princess Cruise Tips
How to Keep Your Data Safe When Cruising
Onboard Health and Safety Essentials to Pack for Your Next Cruise
Everything Alaska Cruisers Need to Know About ArriveCAN 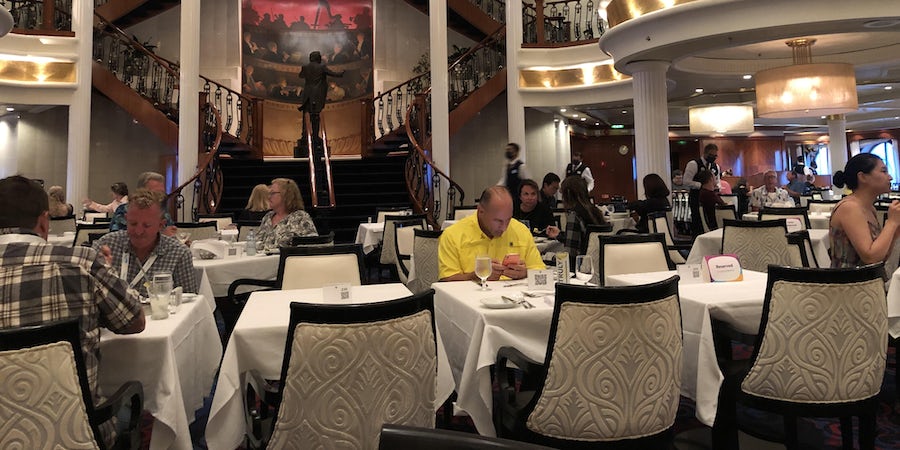 Using QR Codes on A Cruise Ship: Everything You Need to Know

Digital QR codes have become a necessary part of pandemic life, and that includes when you're on a cruise. Many cruise lines have switched to using QR codes to replace restaurant and bar menus; in some cases, the daily program is also a QR code (although more likely to be part of an app, with paper copies available upon request).

There are pros and cons to the QR code practice. After encountering QR codes on ships all throughout the industry's restart in 2021, the Cruise Critic team, as well as our members, have the following thoughts.

What is a QR Code and Where Do I Find It on A Cruise Ship?

Let's get technical for a minute. The "QR" in QR code stands for "quick response" – and that's what you are supposed to get when you hover your phone's camera over the matrix bar code. A web page is supposed to automatically pop up, and you click on that to explore meal and drink menus, activity schedules and whatever else the cruise line automates.

You are most likely to encounter QR codes in cruise ship bars and restaurants, where formal menus have been ditched because of health concerns. You can still get the paper menu, in almost all cases and venues, but you must take the extra step of asking your waiter or server.

Do I Need a Wi-Fi Package to Use a QR Code?

Nope. You still will need to have your phone with you, but QR codes on ships are designed to work without needing a Wi-Fi package -- though you will need to be connected to the ship's Wi-Fi network in most cases.

Nearly all cruise ship apps also work onboard without buying a Wi-Fi package, by the way, although some apps have features such as texting or chat that does require purchasing an internet package.

What Are the Upsides to Using a QR Code on a Cruise?

The biggest upside, from the cruise line's point of view, is that you avoid recycling the same menus over and over. This reduction in contact was seen as particularly important at the beginning of the COVID-19 pandemic, when it was thought that the virus could be spread on surfaces (COVID-19 is an airborne virus).

Even now that more is known about COVID-19, the cruise lines still like using QR codes. It saves them printing costs, and eliminates the need to maintain a huge number of printed menus.

From an environmental point of view, cruise lines are no longer wasting reams of paper either in the cabin or in the restaurants every day.

QR codes can also make mealtime more efficient, as passengers can simply look at the menu as soon as they sit down, rather than wait for a server or bartender to hand it to them.

Another upside: If there are changes to the restaurant or bar offerings, it's easier to update via QR code than redo a bunch of printed menus.

What Are the Downsides to Using a QR Code on a Cruise?

The biggest one is that you have to carry your smartphone with you to meals and around the ship. A lot of people use vacation and cruises as a time to get away from screens and technology. That's not really possible anymore (although we'll reiterate that you can always ask for the printed menu).

Using QR codes can also take away from the atmosphere, particularly in a specialty dining venue. Let's say you've booked a lovely romantic dinner at the ship's steakhouse. It takes a bit away from the experience for the two of you if each person brings out their phone out and hunches over it to pick out dinner, as opposed to reading a gorgeous bound menu.

Another thing we don't like about QR codes is the scrolling that you have to do on your phone, as opposed to being able to view the menu in one shot. Cruise ship menus can be extensive, and it can take some time to get to the bottom. We've also encountered QR menus that freeze before you get to the bottom, meaning that you're not able to see all of the choices.

Maybe we're a bit old-fashioned, but we still think that phones shouldn't always be at the table. Once you bring out your phone to read your menu, it's hard to put it away and just concentrate on being with the people in your party -- especially if you're getting notifications from apps and messages from friends.

Finally, we've been on ships where the QR code for the day's activities is only released one day at a time. That makes it hard for planners who like to see a full week's itinerary in one place.

Are QR Codes on Cruise Ships Here to Stay?

That's a question that's as hard to answer as when the pandemic is officially going to end. Our gut reaction is that QR codes will be a permanent staple on major ocean cruise ships from now on, as they've been seen as a proactive safety measure that also saves the line money. Cruisers are only becoming more tech savvy, not less, and being environmentally conscious is also top of mind.

So, for now, don't forget that phone when you leave the cabin -- or make peace with being the person who always asks for a printed menu.