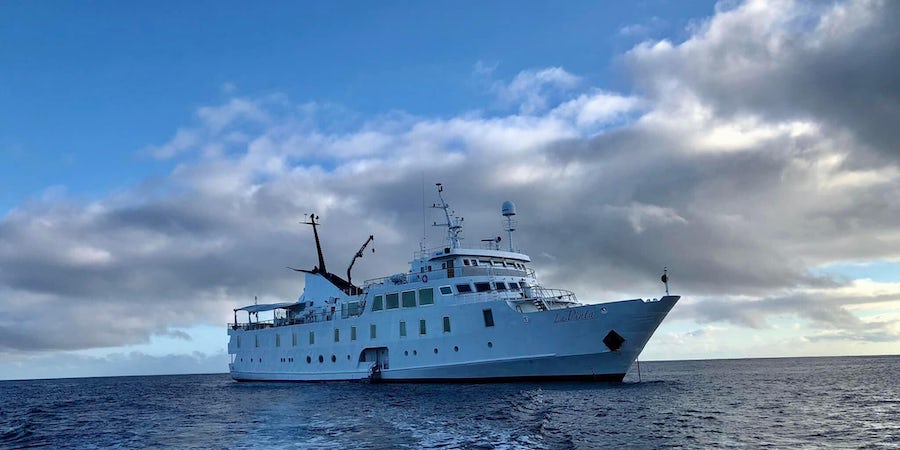 Live From the Galapagos: What It's Like To Cruise These Islands Right Now

The sea lion pup shakes off the sand and calls out for his mother to nurse. A female blue-footed booby, waiting for its mate to come back with food, stands guard over a fledgling chick. A red-footed booby – the difference in color in the birds' feet comes from the food they eat – warms an egg in a cliff nest high above the Pacific Ocean.

The circle of life is alive and well in the Galapagos, a welcome sight after the unpredictability of travel this year. The nature-rich Galapagos has been open for small ship tourism since August 2020, allowing intrepid travelers to continue to fulfill their bucket list dreams.

I'm on La Pinta, a 48-passenger ship owned and operated by Metropolitan Touring. While the Ecuadorian company might not have instant name recognition, it has been around for 68 years and oversees a network of lodges, hotels and ships that are often chartered by other lines.

My four-night cruise is not long, but it gives me time to see the highlights of the Galapagos, plus a bit of Ecuador's capital city, Quito. Many busy travelers, particularly families, are drawn to Metropolitan Touring for its shorter itineraries in the archipelago, along with the ability to mix and match time on land in other parts of Ecuador and South America.

Curious about what it's like to cruise the Galapagos on a small ship right now? Read on.

As in the rest of the world, cruising ceased in the Galapagos in March 2020 when the COVID-19 pandemic hit. Ecuador had to quickly come up with health and safety procedures, as many local Galapagos residents were trapped on the mainland. Standing still was not an option.

Many big-name cruise lines, such as Celebrity, Silversea and Lindblad, have ships based in the Galapagos. But it was Metropolitan Touring, which specializes in Ecuador, that returned to Galapagos cruising first, in August 2020. (Most of the other lines returned in spring and summer 2021).

The Galapagos has always operated under stricter guidelines than cruising in many other parts of the world. Ships are restricted to 100 passengers maximum and must be flagged in Ecuador; the vessels are also required to have Ecuadorian crew and serve food from either the Galapagos Islands, mainland Ecuador or from other neighboring South American countries. All guides must either be from the Galapagos or trained there. The number of people allowed at each site is regulated.

So it stands to reason that the COVID-19 protocols in the Galapagos are also strict. Metropolitan Touring, as well as other major lines in the Galapagos, require all passengers to be vaccinated. Being vaccinated also makes it easier to enter both Ecuador and the Galapagos, with a negative COVID-19 test no longer necessary if you've had your shots (as of late October 2021). Proof of travel insurance is also required for the Galapagos, which makes sense when you consider how far the islands are from major medical care.

Onboard, guests were encouraged to sit at the same tables to discourage intermingling, and QR codes were used instead of menus. Social distancing was quite easy to do, as there were only 36 people on our La Pinta sailing. Temperatures are taken daily and there's a medical officer onboard.

Where we found the Galapagos to be the strictest, however, is with the Ecuadorian mask mandate. Masks are required to be worn outdoors as well as indoors, unless you're actively sipping or eating, and the crew of La Pinta took the law seriously.

The outdoor portion of the mask mandate can be hard to follow, particularly when you are doing more strenuous activities such as hiking. Yet it's equally hard to argue with the results: While other areas of the world are seeing spikes in COVID-19 cases, Ecuador's caseload remains low overall and lower than its counterparts in South America. Vaccination rates in Ecuador are also higher here than other South American countries, at 60 percent; within the Galapagos, the vaccination rate is 99 percent.

Tourism has been returning, although it's far from 2019 numbers. In 2019, there were 211,874 tourists in the Galapagos, we were told – as of September, the 2021 numbers are 83,190 people. The difference is in the makeup of the passengers. Before the pandemic, 67 percent of the travelers were international, and only 33 percent were from Ecuador. Now those figures are reversed.

La Pinta is one of three ships that Metropolitan Touring owns, and it's considered the mid-size option with 48 passengers. The two other ships are Santa Cruz II, which can carry 90 passengers and Isabela II, which has 40 guests.

Metropolitan Touring's footprint goes beyond its three ships. The company often charters the ships to other lines – Santa Cruz II, for example, will sail under the Hurtigruten banner in 2022 – and works to supply others, such as Silversea and Lindblad. It's also partnering with AmaWaterways to develop a river cruise on the Magdalena River in neighboring Colombia for 2023.

We found that Metropolitan Touring stood out from some other cruise lines in two areas: shorter, more flexible itineraries that can be easily combined with a land trip in Ecuador and very active shore excursions that included hiking, snorkeling, kayaking and paddleboarding.

While most other cruise lines offer sailings that are a week or longer, Metropolitan Touring found that many of their customers were asking for more flexibility, as well as the ability to see more during their trips, said Francisco "Pancho" Dousdebes, Corporate Responsibility and Sustainability Manager for the company.

"More people want to combine the Galapagos with more destinations," he said. "Instead of two trips to South America, they were saying, 'let's put it together in one shot.'."

The pandemic has not changed that trend, although travel requirements between countries has made it harder to cross borders. Again, Metropolitan Touring has a natural edge, as the company owns several hotels and lodges within Ecuador.

A typical Metropolitan Touring trip that includes the Galapagos could start in Quito, with a night or two at Casa Gangotena, a boutique hotel owned by the company. The Relais & Chateuax hotel has its own excursions and tours within the city. For people who want a rainforest component, the company owns The Mashpi Lodge, which comes with a spa, an expedition room and a canopy sky bike high in the treetops.

Finally, for people who love to scuba dive, you can add a night or two to your cruise within the Galapagos itself, at Finch Bay Hotel on Santa Cruz Island.

Exploring The Galapagos With All Senses

While I didn't dive on my Galapagos cruise, I found myself happily worn out at the end of the days, thanks to a rigorous and active schedule that packed as many of the "Big 15" animal and bird sightings into the trip as possible.

We were up close and personal with sea lions within hours of boarding La Pinta, thanks to an afternoon walk around South Plaza Island. While everyone was entranced with the cute furry mammals that showed absolutely no fear of humans, our real focus were the land iguanas, which were hard to spot among the cacti-strewn landscape. The island's red and purple sesuvium glowed as the sun set and a full moon rose.

"Most people don't realize that the islands are all different," Dousdebes said. "The more islands you visit, the better the trip." All in all, we are scheduled to visit five islands, with multiple stops on some.

The activity level went up a notch on our first full morning. We started with a 6 a.m. breakfast, a selection of fruits, breads, cereal and hot made-to-order items. The big fuel up was necessary for a hike up the ridge of Santa Fe Island, where we scrambled over a rock-strewn path, checking out finches, mockingbirds and the elusive Santa Fe iguana, a species endemic only to this small dot on the map.

The hard work of a legit hike was relieved by a few hours of watersports. We donned wet suits provided by the ship to snorkel near the beach. Sea lions joined us, weaving their way around us in the water, as curious as we were about them. Angel fish schooled on the bottom of the bay, while a large manta ray drifted by. A shout went up, as a swimmer discovered a large sea turtle.

Evenings consist of an ECO moment over cocktails -- generally a 15-minute presentation on something interesting we had seen that day. Guides go over the program for the next day, with a focus on what kind of gear you'll need. Dinners are three courses, with almost everyone ready to go to bed immediately afterward.

While my trip isn't over yet, I am feeling renewed by the ability to get back out and explore the more remote corners of the world again. The pandemic may have delayed bucket list cruises for a while, but it turns out that the desire to see new things is engrained. When you are ready for the Galapagos, it is ready for you.