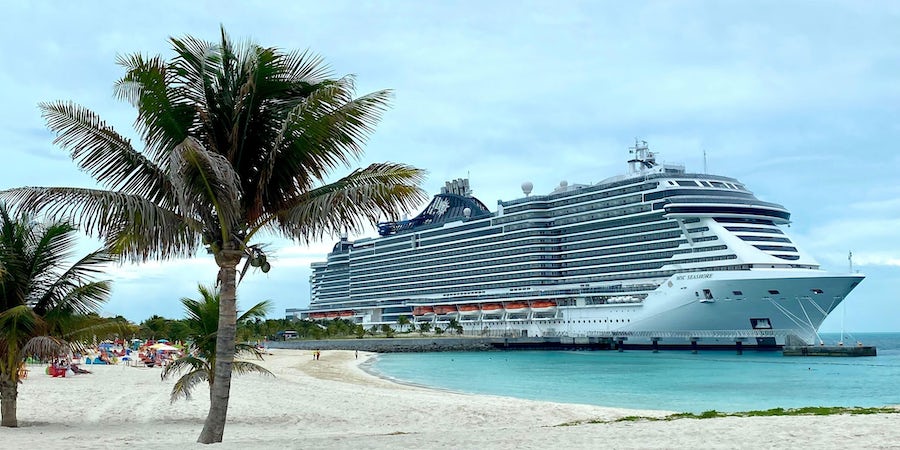 MSC Seashore officially became the newest member of the MSC Cruises fleet Thursday evening following a naming ceremony which took place onboard the ship and in port at its new private island, Ocean Cay MSC Marine Reserve, in the Bahamas.

Originally, the christening ceremony was to take place outside on the ship's deck, giving MSC Seashore Godmother -- iconic Italian actress Sophia Loren -- the honor of smashing a bottle of champagne on the hull of the ship to officially mark the occasion as is customary in maritime tradition.

However, in the current climate of continuous pivots, the ceremony was moved indoors to the ship's Madison Theater. As with much of the pandemic, MSC took the change of plans in stride and the show went on with several speakers taking to the stage to celebrate the particularly momentous occasion.

There were also performances by MSC Seashore's shipboard entertainers, a parade of officers, promotional videos, and even a few jokes (like during a recap of the brand's start in cargo, when Gianluigi Aponte, founder, owner and chairman of Group MSC, said in a pre-recorded video that the company began by shipping anything it could -- and an old photo of two live camels being lifted onto a cargo ship appeared on screen).

The first of the line's EVO-class vessel to debut, MSC Seashore is a ship ripe with superlatives for the cruise line. MSC Seashore is MSC's longest, biggest and most eco-friendly ship to-date, and was designed to offer more space-per-passenger than any other vessel in the fleet. It also became MSC's first cruise ship to be christened at a private island, making for an even more memorable debut.

Attendees were given a lesson on the brand's history as a cargo shipping company, a topic that was celebrated several times throughout the ceremony which included travel trade partners, media, VIPs, executives, and Mediterranean Shipping Company cargo clients.

"A naming ceremony, no matter where it is, is a sign of good luck," Pierfrancesco Vago, executive chairman of MSC Cruises, told the crowd. "And, as mariners, we are superstitious -- so let us celebrate the good luck that we are all here together."

Vago recounted the many successes of Group MSC, from being the number one cargo company in the world to being the fastest growing large cruise line and aligned MSC Seashore's debut with the brand's ongoing growth ambitions.

For MSC Cruises, the choice to base MSC Seashore from PortMiami is also a testament to the brand's big grab at the U.S. cruise market -- the largest in the world. MSC Seashore is the brand's 19th ship in its fleet since it began building new ships in 2003, and is the third ship from the brand to homeported in the United States, where it joins fleetmates MSC Divina and MSC Meraviglia.

The result is a new class of ship that MSC refers to as EVO-class, short for "evolution."

"I Want to Remember This For the Rest of My Life"

Vago also took a few minutes to plug the cruise line's new planned terminal at PortMiami which is slated to break ground on December 13 and talked about the importance of the MSC Foundation's work to fight against climate change and the brand's aspirations to become a leader in sustainability in the cruise industry.

Before stepping off stage, the Executive Chairman paused and asked to take a selfie with the audience.

"This (occasion) is truly momentous," he explained. "I want to remember this for the rest of my life."

Godmother Sophia Loren closed out the ceremony, accompanied by Guiseppe Galano, Captain of MSC Seashore. The pair counted down from five along with the audience of over 900 before cutting a ceremonial ribbon on stage, triggering a bottle of champagne to successfully smash against the hull of the ship.

MSC Seashore was initially scheduled to run Mediterranean itineraries, though sailings were delayed due to the COVID-19 pandemic. In August 2021, MSC Cruises announced it would instead homeport MSC Seashore from PortMiami to run 7-night Caribbean sailings, including stops and overnights at Ocean Cay MSC Marine Reserve.