You may also like
Dismiss
5 Tips for California Cruises
Embarkation in Los Angeles (San Pedro): Cruise Terminal Parking, Address and Amenities
Flying to Your Cruise: A Guide to Long-Haul Airports, Airlines and Flights
Top 8 Long Haul Short Break Cruises
The Best Month to Cruise Hawaii
Where You Can Cruise to Onboard Carnival's Newest Cruise Ship, Carnival Panorama
Grown & Sexy Cruise
10 Best Beaches in Mexico for Cruisers
What Is the Economic Impact of the Cruise Industry in the United States?
16 Pictures of Our Favorite Cruise Balcony Views 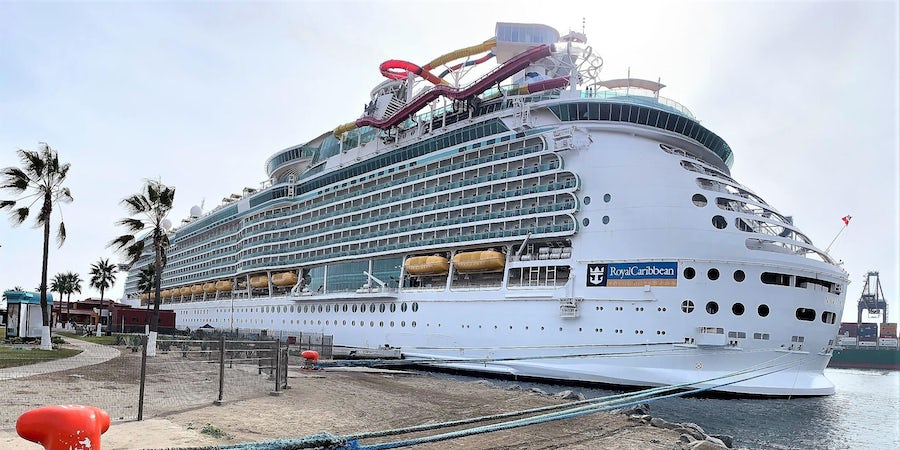 After a Decade-Long Hiatus, Royal Caribbean Returns to the West Coast with Navigator of the Seas

West coast cruise offerings are becoming more popular and more plentiful as we climb out of the global health pandemic and cruise lines rush to meet the pent-up demand for travel. The menu of options available to cruisers expanded this week with Royal Caribbean’s return to California for the first time in more than a decade.

Royal Caribbean kicked off a series of short cruises aboard Navigator of the Seas that will sail to Catalina Island, Ensenada and Cabo San Lucas, Mexico out of the Port of Los Angeles (San Pedro). The 3,388-passenger ship recently received $115 million worth of upgrades that the cruise line describes not as just a refresh or even a revitalization, but as an 'amplification'.

A New Navigator of the Seas

In addition to multiple entertainment venues, including ice skating shows enhanced with drones, Navigator of the Seas sports redesigned spaces for kids, a surfing simulator (FlowRider), and new specialty dining rooms that includes Jamie’s Italian by Jamie Oliver and Hooked Seafood, where our table sampled (full disclosure: gorged on) everything from soft shell crab, Maryland crab cakes, ceviche, and fresh shucked oysters, to crab and clam chowder, surf and turf, and 2-pound lobsters.

Navigator of the Seas also boasts several exclusive feature nows. The ship has the first blow-dry bar at sea -- cleverly named 'To Dry For' -- which impressed salon goers with surprisingly reasonable prices (shampoos and blowouts start at $49, and a bundle of 3 shampoos and blowouts is $129). Other exclusives include a three-level bar, The Lime & the Coconut, at the resort-style pool, and two definitely-amped waterslides: The Blaster, which is the cruise line’s first aqua coaster and, for now, the longest aqua coaster at sea; plus, Riptide, the only head-first mat racer waterslide at sea, featuring a bonus thrill-inducing section with a translucent tube that extends out over the side of the ship.

"We always saw this as an important market and we always wanted to come back to Los Angeles," Vicki Freed, Royal Caribbean International’s senior vice president of Sales, Trade Support and Service, told Cruise Critic during the debut cruise. "But we’ve just not had the right hardware that we wanted to bring back. Now, with the amplified Navigator of the Seas, we feel we have the right ship for this market."

Freed says Royal Caribbean also wanted to be able to reenter the West Coast market with a good variety of offerings. "The 3,4, and 5-night cruises are short getaways," say Freed, "And the 7-day cruises are more like vacations. We feel having the variety will help build momentum for us and then we can bring more ships out here."

Families, including those taking multi-generational vacations, remain a key target audience for these west coast voyages, Freed told us. But she also thinks that by sailing out of Los Angeles, Royal Caribbean will be able to attract travelers from feeder markets in Northern California, Arizona, and other west coast cities and serve Los Angeles residents who might typically go to Las Vegas for the weekend. "They’ll make it easy on themselves by hopping on Navigator of the Seas, where they can do some gaming and also get wonderful food, service, and entertainment."

Gretchen McGarry, a frequent luxury cruiser who lives in West Hollywood, CA and joined Navigator of the Seas' first sailing out of the Port of Los Angeles declared Royal Caribbean’s return to the West Coast both exciting and very convenient. "No airport, no hassle," she said. "It’s just a drive from my home to the Port and I’m looking forward to doing more of these."

Health and Safety Protocols for Navigator of the Seas

The cruise line says it is currently evaluating whether or not to require kids 5 to 11years of age to be vaccinated before boarding, but for now guests under 12 who are not vaccinated "will complete additional COVID-19 testing requirements depending on the length and departure port of their sailing."

The cruise line’s Healthy Sail Center has the most current policies and protocols for Royal Caribbean and Navigator of the Seas.

Navigator of the Seas sails a mixture of 3, 4, 5 and 7-night voyages to California, Baja Mexico and the Mexican Riviera throughout the remainder of 2021 and 2022.