You may also like
Dismiss
Middle East Cruise Tips
Ganges River Cruise Tips
8 Things to Watch Out for When Cruising to China
Embarkation in Piraeus (Athens): Cruise Terminal Parking, Address and Amenities
Cruise Vision 2020: The Future of Cruising in Australia and New Zealand
6 Ways LGBTQ Cruisers Can Stay Safe on a Port Stop in Jamaica
Cruise Policies & Inside Information
Things to Do in Singapore Before a Cruise
'A Cruise Destination Like No Other:' Live From Scenic Eclipse in Saudi Arabia
Just Back From Scenic Eclipse in Saudi Arabia: A Re-Imagined Cruise Ship 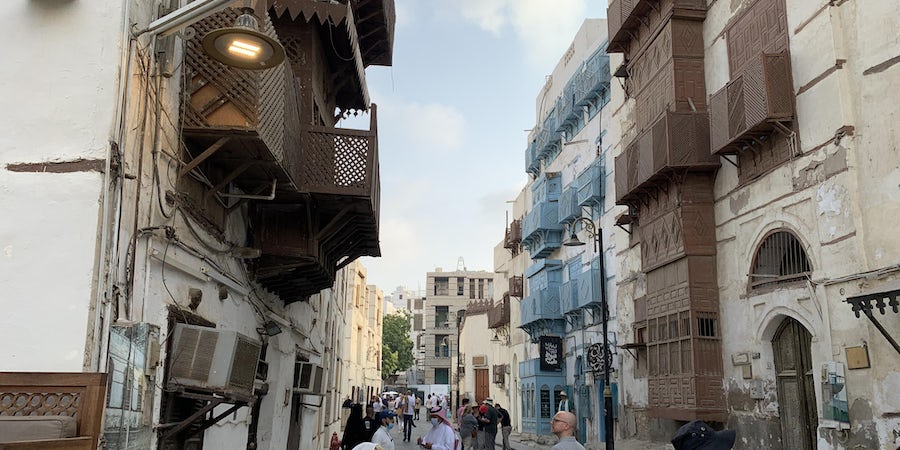 Scenic operated a one-off cruise for agents, employees and press in October 2021, but will not base a ship there. Sister brand Emerald will base one of its small yachts in the Red Sea port of Jeddah in 2022.

Other smaller lines including Silversea and Ponant, are also planning on port calls here in 2022.

Saudi is unlike any other country in the Middle East, so if you are used to the excesses of Dubai and its neighbours, prepare for culture shock. A cruise here will not be like those you find in the Arabian Gulf.

The kingdom has been closed to all but religious tourists and business travellers since 2004, and is only just beginning to open up to leisure tourism as part of a program helmed by the de facto leader Crown Prince Mohamed bin Salman called Vision2030.

The first and most important thing to know about Saudi is that it is a strict Muslim country that follows Sharia law, so Western norms such as LGBTQ rights, freedom of speech, the consumption or import of alcohol and sex outside of marriage are strictly banned (see below) -- and penalties are harsh and draconian.

The country has made small but significant strides in terms of gender equality, however, with women's rights making many gains in the past few years. Indeed, if you walk around the streets of the major cities you will see women walking unchaperoned, heads uncovered, driving and even owning businesses. It might sound absurd in terms of Western norms, but it is significant for Saudi.

If you do choose to cruise here, you'll get a glimpse into how large parts of the Middle East once were -- undeveloped and unspoilt -- and it will also offer a glimpse into the Muslim culture and lifestyle which is often misunderstood on the world stage.

The Saudi sailing season runs from November through March, when the weather is mild and you're guaranteed sunny days. Repositioning trips tend to happen in late October and early November and again in late March and early April.

As of 2021, the only line which bases a ship here is MSC Cruises, in Jeddah. MSC Bellissima offers seven-day cruises calling in at King Abdulla, Yanbu and Aqaba, for international cruisers.

Emerald Cruises will base Emerald Azzurra here in 2022, and smaller lines such as Silversea and Ponant call in at Jeddah on longer itineraries.

At present, there are limited port stops along this stretch of the coast as the infrastructure is not there yet.

MSC Bellissima homeports in Jeddah and offers seven-night round trip cruises calling in at King Abdullah Economic City, Yanbu and Aqaba, in Jordan.

Jeddah is Saudi's second city and long-considered its most liberal. The highlight here is the remarkably well-preserved old town, a maze of winding streets flanked by duck-egg blue and ochre buildings, some crumbling, some being refurbished, and all full of character and stories. Most are hundreds of years old and are being refurbished as part of Vision2030.

Yanbu is a small port to the north of here, whose city center has been spruced up for the expected influx of tourists. At present, there is little to see or do here and its main role is the gateway to AlUla, arguably Saudi's main tourist attraction (see below).

However, big plans are afoot for significant port development as part of the remit of newly-created body CruiseSaudi. Its aim is to build two new ports along this stretch of the Red Sea coast, as well as redevelop Yanbu and Jeddah's ports to integrate them into the city, and develop another port on the Gulf Coast. The ports are:

Al Wadj. At present this is a tender port only, but the aim is to create a pier which can cater to large ships. Later in the season, MSC Bellissima will tender here as it is much nearer geographically to AlUla than Yanbu (just 2.5 hours by bus).

Duba. In the far north of the country, this is the first Saudi port of call as ships exit the Suez Canal into the Red Sea, opposite Hurghada. At present there is little here, but it will one day be the gateway to Neom, a futuristic city being built in the desert, which will have no cars and transport by monorail. Duba is also the gateway to Wadi Tahib, and is known for its stunning beaches.

Dammam. This port is on the East Coast, in the Gulf, right beside Bahrain. Currently it is a cargo port only, but the aim is to turn it into a passenger facility for Red Sea cruises.

AlUla: The jewel in the Saudi heritage crown, and home to the kingdom's first UNESCO World Heritage Site, AlUla is located some 1,000 km from Riyadh, in North-West Saudi Arabia. The vast area, covering 22,561km², is the size of Belgium and includes a lush oasis valley, expansive desert, towering sandstone mountains and ancient cultural heritage sites dating back thousands of years to when the Lihyan and Nabataean kingdoms reigned.

The most well-known and recognised site in AlUla is Hegra, Saudi Arabia’s first UNESCO World Heritage Site. A 52-hectare ancient city, Hegra was the principal southern city of the Nabataean Kingdom and is comprised of 111 well-preserved tombs, many with elaborate facades cut out of the sandstone outcrops surrounding the walled urban settlement.

AlUla Old Town, a labyrinth of more than 900 mudbrick homes developed from at least the 12th century, and Hijaz Railway and Hegra Fort, key sites in the story and conquests of Lawrence of Arabia.

You'll also find a modern marvel, Maraya, a concert hall built in the middle of the desert and also the largest reflective structure in the world.

1. Do NOT Even Think About Taking Alcohol Into the Country

Don't even go there. Alcohol and drug offenses are considered a crime against God in this strict Muslim country. As with drugs, there is a prohibition on the manufacture, sale, possession, and consumption of alcohol in Saudi Arabia. The Kingdom is not like liberal Dubai or Abu Dhabi -- the country is 100 percent dry and Sharia, or Islamic law is strictly enforced. Don't put it in your water bottle or try and hide it in your suitcase. This is not a case of being confiscated and you waved on, or even just a hefty fine -- drinking is punishable by public flogging, lengthy imprisonment, and deportation in certain cases. It's just not worth it.

2. Alcohol is Available Onboard

The good news is, however, once your ship is 12 nautical miles from the Saudi coastline, the bars open and alcohol is served in the restaurants. A cruise may in fact be your best bet to see the country and enjoy the odd tipple, as there are no exceptions made on any land-based travel. Note, however, that many ships will overnight in a Saudi port, during which time the bars will be closed (though your minibar will not be locked).

On our cruise, a young female guest came down to the foyer in tiny shorts and was asked to go back to her room to put on something more appropriate. However you feel about covering up -- and this goes for men and women, though more so for the latter -- it's important to respect the country's rules. Both men and women should err on the side of covering up, and although female tourists do not need to cover their heads any longer when walking around, they do need to in places of worship.

The Morality Police may be long gone, but old habits die hard and it's just not done to walk down the street hand in hand (see below for same sex couples) or show any public displays of affection.

5. Homosexuality and Sex Outside Marriage

Sharia law also bans homosexuality, so it may well be the case that as a member of the LGBTQ community, you have no wish to visit here anyway. Even if you are in a same sex civil partnership or marriage, neither are recognised in Saudi and you will need to exercise discretion if you are with a same sex partner and share a hotel room. Sex outside marriage is also illegal. The punishment varies depending on the circumstances: married men and interfaith sex are punished with the death penalty, while non-married men are punished with flogging.

Scenic covers mentions this in its pre-cruise literature with the following statement:

"A: Visitors are not asked to disclose personal information, and all visitors are welcome. For tourists in the region the recommendation is to respect local laws and understand certain behaviours need to be altered so as not to offend or violate local laws."

MSC Cruises is determining how to approach this, but confirmed that gay cruisers are definitely not banned from entering the Kingdom and sailing.

6. Talk to the Locals

Don't think that just because the country is repressive and regressive when it comes to human rights that every citizen is onboard with that -- 70 percent of the population is under 30, many are well educated and/or have spent time abroad, and have much more liberal views than you might expect. We engaged our female guides whenever we could and they were more than happy to speak to us. One area which has come on in the past few years is gender equality, and women are happy to talk to inquisitive tourists.

7. Playing Music in Public is Banned

Just in case you were thinking of linking up your iPhone with your Bluetooth speaker and playing it in a public spot, don't. It is seen as a public disturbance and can land you in trouble. You can do it in your cabin, of course, even while docked in a Saudi port, but avoid it in public spaces.

Probably best to leave that crucifix round your neck in your cabin safe. Sharia law prohibits public observance of any religion other than Islam. If you are Jewish, you are allowed to visit the Kingdom, but not if you have an Israeli passport or a stamp from a visit to Israel.

Things have come a long way in the past few years, and the title above would not be one we could write even just two years ago. On our cruise, unaccompanied women passengers wandered around towns and cities perfectly freely, with no harassment or concern for safety. One thing you will soon feel is completely safe -- crime levels are virtually zero in Saudi, particularly against the person.

Saudi Arabia has a long way to go when it comes to LGBTQ issues, human rights and freedom of speech, and it's understandable if these issues remove the country from your personal travel list. But the Kingdom is gradually changing. Our advice is do not try and take on the system, you won't win and you could land up in jail or worse. Observe, respect and enjoy and by being there, you may well have played a part in opening it up that little bit more.