You may also like
Dismiss
Q&A with a Cruise Ship Entertainment Director
Cruise Supplies: The Longest Shopping List in Australia
6 Cruise Memories That Will Warm Your Heart
Cruise Critic Members Shout Out a Few of Their Favorite Crew
Weaving 'Herstory': Q&A With the History-Making International Women's Day Cruise's Female Officers on Celebrity Edge
Q&A With Bug Naked, Cruising's Most Famous (and Least Furry) Feline
Why Germ-Zapping Robots and AI Technology Could Be the Future For Cruise Ships
Will I Have to 'Social Distance' on My Next Cruise?
How To Cope With Cruising's Pause? Plan Far, Far Ahead 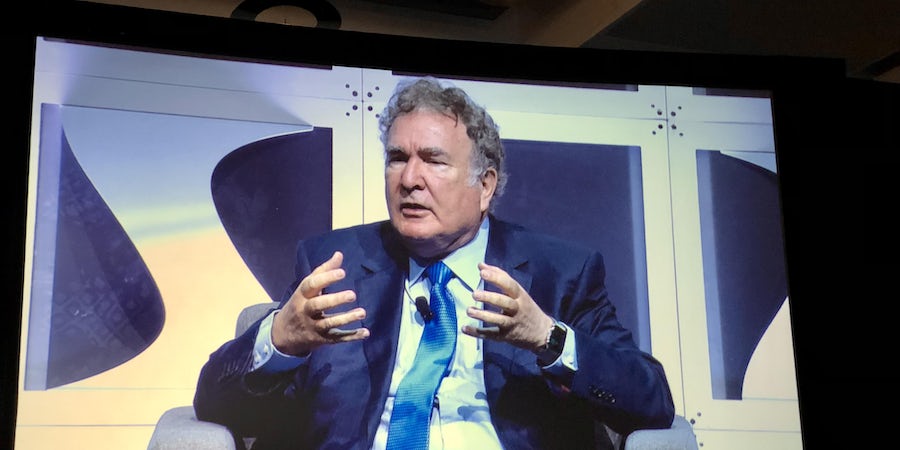 As the head of Royal Caribbean Group for 33 years, Richard Fain has spent his career continually pushing the cruise industry to new heights. Among his credits: bigger and more wow-inducting cruise ships such as Royal Caribbean's Oasis and Quantum-class vessels; private island destinations that rival land-based parks in their offerings and – of course – steering the company through the COVID-19-induced industry shutdown.

Today, Fain announced that he would be stepping down from his position as President and CEO of the cruise company, which includes Royal Caribbean International, Celebrity Cruises and the luxury line Silversea in its portfolio. While Fain will remain chair of RCG's Board of Directors, Jason Liberty will become the company's CEO on January 3, 2022.

Cruise Critic sat down for a virtual interview with Fain. Here are excerpted sections from the conversation.

Richard Fain: I'm not, with all due respect. I'm very much looking forward to it and excited to see Jason take it on and take us to new heights.

RF: I have become convinced that our pathway forward is clear. We're past the worst of the pandemic, and the industry in general and Royal Caribbean in particular have figured out the formula for moving forward. We have more to go to get there, but the outcome was clear. So that was one factor.

I do a lot of other things civically and community-wise. More and more I have found that I have not been able to devote the time and effort that I would have liked to. I don't like to not give it my all, and I found that I wasn't.

I thought of an analogy that might be apt. My wife and I dated for three years before we got married. If you ask me, when exactly did you decide that this was the right thing and you were going to do it? I couldn't answer that question. I could tell you it happened sometime between 52 and 53 years ago it became obvious that this was the right time and the right person. And it feels the same way, with respect to Royal Caribbean and Jason.

CC: The industry has changed a lot in all the years that you've been at the helm with Royal Caribbean. What are some of your personal milestones?

RF: There are too many milestones in 33 years to try and rate them. I think the thing that I'm maybe most proud of is the culture here, the people here and the commitment to our values that permeates the organization. Everything else flows from that.

CC: In terms of that culture, do you think that's what kept driving Royal Caribbean to break different milestones? Your very first ship (Sovereign of the Seas) was the biggest at that time (in 1988), then Oasis and now with Wonder of the Seas coming out – you've kept innovating. How did you instill that?

RF: That's part of the culture here. We're never satisfied, we're always looking continuous improvement. I think a lot of enterprises do something good and then rest on their laurels. And I think part of what has made us successful has been a very strong belief that we can always do better and to produce something great. We think, how do we move forward and take that to the next level? That insatiability has been what drives us and continues us to progress.

CC: Are there any particular features on these ships that someone is going to look back on and say, "that was pure Richard?"

RF: No, because none of it is pure Richard. What I'm most proud of is that all the ideas came from everybody. This wasn't one person who was just so inspired or so brilliant -- this was a team of people who work together and gin each other up.

I once had a frozen shoulder and I went to the therapist. The therapist had me work on a machine where you turned a crank and it showed you on a TV monitor how much energy was being used. So I asked, 'how high should it go?' And he said, 'oh, you'll know. I brought it up as high as I could. And then I had to do it again – and I knew that the bar had to be higher than the previous time. I was my own biggest competitor. You want to beat that other person, even if that other person is yourself. And that's what we've done on the ships.

CC: Over your long tenure, would you say that the pandemic was the biggest challenge?

RF: The challenge you've just been through always seems like the biggest challenge. But 9/11 was really terrifying. And the Great Recession was a time where no one knew what the future held. From the beginning, I think we were reasonably confident that this was a finite crisis. That was a distinction. This crisis was deeper and definitely harder in many respects, but you knew it was finite. You knew that we would come out of this and we will come out of this, whereas going into something like 9/11 and the Great Recession, you didn't know what the long-term consequences were. So it wasn't as acute as this, but in some respects, those were more challenging because the potential danger was longer term.

We always felt that it (the pandemic) was going to be awful while we were in it, but once we came out, life was going to be very good. The figures seem to be bearing that out today.

CC: What do you predict is the future for Royal and for the wider industry?

RF: Overall what you're seeing is what people want, and are now willing to pay for more than every is quality, safety and sustainability. That's something that more and more people are just going to demand as table stakes. You can also look at the ships we've done. We think that' larger ships offer you more opportunity to give people more choice. People want choice. People want to make their own decisions about how they spend their time. And so we'll continue on that path.

I also have to say that starting in January, we're going to have a new leader here at Royal Caribbean. And I think he's the right person at the right time. Obviously I've worked closely hand in hand with him for half of my 30+ years here. The other thing about this industry is that nothing remains static and change is a constant. I am hopeful and confident that he will adjust, as the world around us change.

CC: What do you think people should expect from Jason? During the pandemic, he was a very steady voice. What sort of things do you expect will be on his top agenda?

RF: As you say, he was a steady voice. If you look at the kind of financing that we did, it was thoughtful and careful and positioning us for the recovery. And that has served us extremely well. I think he will be a calm and steady hand on the tiller.

CC: You mentioned earlier that you wanted to devote more time now to some of your charitable organizations. What will a year from now look like for you, Richard? What will you be spending your time on?

RF: Some of the other organizations that I've been involved in are very worthwhile. I'm not retiring, but I'm stepping down as CEO. When you do think of retirement, you shouldn't retire from something, you should retire to something. I thought that was an apt expression. I'm very fortunate that I have so many other activities that I enjoy that includes community activities, but it also includes my family and my eight extraordinary grandchildren.

CC: Now that you're stepping down, will you take cruises as a vacation?

RF: I definitely hope to be able to take more cruises. I've always enjoyed it, but, um, but it was always a work experience for me. And now I'll be able to do it just for the pure thrill of it…. We have lots and lots of itineraries and I've already got some that I've been eyeballing.

CC: Do you want to mention any in particular?