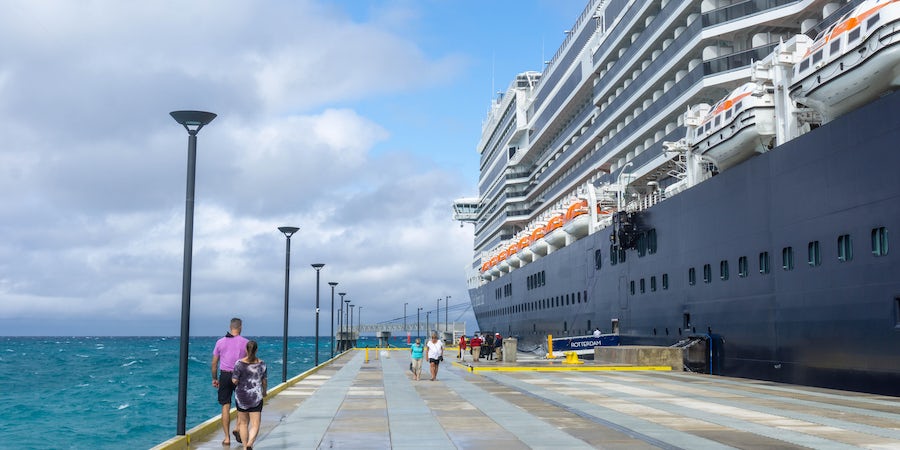 The introduction of a new cruise ship is always memorable, but that only seems to be heightened this year, as the cruise industry comes back and resumes operations following the shutdown caused by the pandemic.

I've been sailing with Holland America Line since I was 21 years old. I am, admittedly, not their target demographic -- though that might be changing now that I am almost 40 -- but from a young age, I fell in love with the line's commitment to carrying on its transatlantic legacy. I liked the dark, moody interior design that wasn't afraid to play with color (remember those fluorescent-turquoise banquettes on Zuiderdam?), and the abundance of windowed public spaces.

It's the little touches, too, that I feel set a Holland America Line ship apart -- individual hand towels instead of paper in the public restrooms; higher-grade Elemis toiletries; superb -- for this class -- bedding and linens. Free in-room movies, even back to the days when watching a movie meant having a browse through the ship's DVD book.

You can't mention a Holland America ship without talking about the ship's gracious Indonesian and Filipino crew. I'm hard-pressed to think of a cruise ship that doesn't offer good service, but Holland America seems to take things to a level you typically only get on a luxury line. Service is personalized and exacting, but friendly and conversational. Order a drink once, and bartenders will remember your preferences. Requests are met with aplomb, and crew seem to take a genuine interest in your happiness. Passing a crewmember without having them say, "Good Morning" or "Good Evening" is unthinkable.

In my first few days aboard Rotterdam, this ship continues all of those important traditions -- while still modernizing the cruise experience and advancing the brand forward.

Paying Homage to The Rotterdams

Designing a ship for the future sometimes requires a journey into the past.

The third and last of the line's Pinnacle-class cruise ships, this Rotterdam was originally to have been named Ryndam. When the previous Rotterdam was sold last summer, however, the line renamed its newest vessel (in the line's 148-year history, it has rarely been without a ship bearing the name).

This ship is technically Rotterdam VII -- the seventh Rotterdam in Holland America Line's history. It is a history sprinkled liberally throughout the vessel in both design and feature;  made more remarkable by the fact this ship was never intended to bear the name.

Eight paintings by noted maritime artist Stephen J. Card grace this Rotterdam, most of which are located in the ship's Crow's Nest on Deck 12 forward. These depict past Rotterdams, and complement the iconic forward-facing lounge -- a longstanding Holland America Line staple -- which also houses a superb builder's model of Rotterdam V -- the 1959 ocean liner turned cruise ship that was beloved by Holland America's loyal Mariner past passengers until its retirement in 1997.

In fact, three builder's models of Rotterdam V grace this new Rotterdam VII -- one on the Crow's Nest and two in the ship's forward and midship elevator lobbies on Deck 7.

They're just one part of the $4.1-million art collection onboard, including the ship's $620,000, 7.5-ton stainless steel atrium sculpture known as "Harps" that spans three decks and acts as the anchor point of the ship.

Holland America pays homage to the history of past Rotterdams in its food and beverage, too. Sample the smoky, gin-based Rotterdam VII cocktail at the Half Moon Bar (more on that below), or head to the Grand Dutch Café with its flower vases bearing past Holland America logos. Or try a special edition Heineken -- available only onboard -- complete with a bottle wrapped in classic transatlantic Holland America advertising.

Tradition may be entwined with this ship, but Rotterdam VII still takes Holland America Line into the future while still respecting its past.

Libraries and Bars, Oh My!

Libraries aren't new to Holland America, but the past few years saw the line start to do away with dedicated, book-filled spaces in favor of more multipurpose areas. The talk of this sailing is the fantastic new Library on Deck 2 forward.

Taking the place of the Microsoft Studio found aboard sister-ships Koningsdam and Nieuw Statendam, a handful of seating areas offer passenger the ability to read within the Library itself. Books have four or five copies apiece; bestsellers are well-represented, but the Library also offers destination-specific tiles, poetry, non-fiction, and even Young Adult titles.

A sign asks passengers to sanitize their hands first and limit themselves to one title, which they can take as they please. No more waiting around for a librarian that's never there, no barcodes to scan. I picked up an Agatha Christie mystery about the Caribbean; it had an ocean liner on the cover and seemed appropriate for our journey.

Another new addition found only on Rotterdam is the cozy -- and underrated -- Half Moon Bar. Running along the aft starboard side of Deck 2 adjacent to the private Club Orange restaurant for suite passengers, Half Moon Bar takes up the space formerly occupied by the Blend wine bar.

It is an exceedingly attractive space, with wood-veneer walls, curved ceiling elements and brass touches that subtly evoke images of a classic ocean liner. There are just four bar stools, and tables for two line the corridor adjacent to oversize windows looking out at the sea.

The signature cocktail -- and certainly the one with the most Insta-flourish -- is the Rotterdam VII. Served only aboard this ship, made with gin, angostura bitters and maraschino liqueur, poured into a decanter and then smoked in an elaborate presentation, it's as eye-catching as this cocktail is tasty.

Best of all, it's one of the ship's more quiet, subdued bars -- perfect for intimate conversation or seaside pre-dinner cocktails.

Several years ago, Holland America totally revamped its onboard entertainment, introducing a renewed focus on live musical performances. You'll find something each afternoon and evening to enjoy, from stunning classical performances at the two-story Lincoln Center Stage to dueling pianos at Billboard Onboard.

Across from here is the Rolling Stone Rock Room, where 80's hits and other classics are performed nightly. It's something of a spectacle -- half music, half performance art -- and draws a lively and appreciative crowd.

While I enjoy the music, neither room has won me over in terms of decor. Both venues seem unnaturally dark and devoid of color, unlike the bright, jazzy spaces on the line's past vessels. They're separated by a spiral staircase that leads up to Deck 3 and the ship's moderately-sized casino, and by Notes, an under-used whiskey tasting alcove which offers 120 different labels, but never seems to be manned.

Further aft, B.B. King's Blues Club (which operates in the same venue as Lincoln Center Stage) is a real winner aboard Rotterdam. There's nothing else like it at sea, and crowds linger well into the wee hours.

The ship's diverse musical offerings are part of what Holland America calls its "Music Walk" and indeed, these spaces -- all of which occupy most of Deck 2 forward -- draw the biggest crowds in the post-dinner hours.

Our stop in Bimini Saturday was beset by high winds that cancelled all shore excursions and resulted in a valiant (and ultimately successful) 60-minute struggle to tie the vessel alongside.

A relaxing sea day en-route to Half Moon Cay (more on that in another dispatch) provided ample time to use the ship's Thermal Suite in the Greenhouse Spa on Deck 9 forward. For $129 for a single pass for the five-day voyage, passengers are entitled to use the large hydrotherapy pool, expanded thermal suite with heated loungers, steam and sauna rooms, aromatic showers, and relaxation room.

Even with strict COVID-19 protocols in place (currently, these include pre-cruise COVID-19 testing, proof of full vaccination and masks required unless eating, drinking or outdoors/poolside), none of the fun onboard is diminished.

If anything, it's the opposite. The passengers I've spoken with are simply happy to be back onboard the line they love, on a ship that's new, and sailing the warm waters of the Caribbean.

As Holland America's classic 1950's advertising exclaimed, "It's Good to Be on a Well-Run Ship."